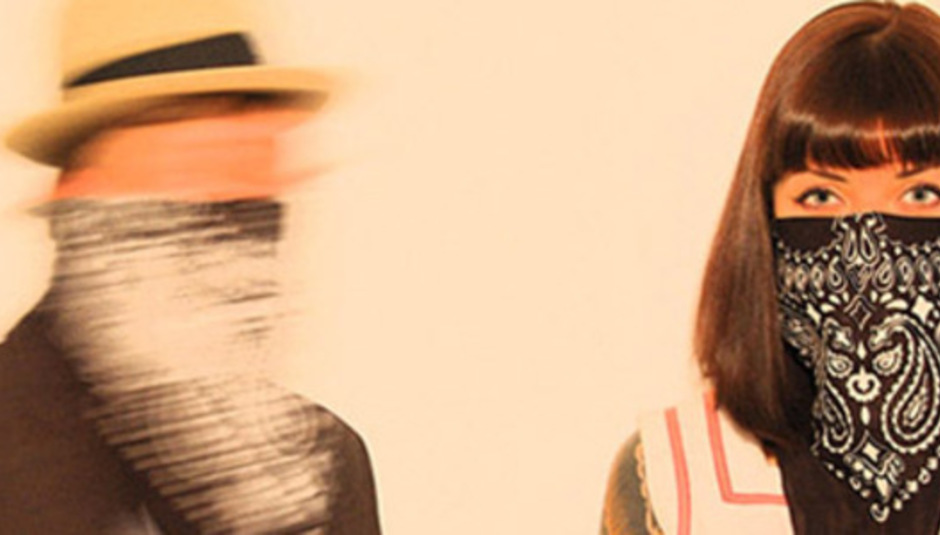 Is it fair to bellow over everyone else? Erupting from Brooklyn, Sleigh Bells have pelted eardrums of the curious with possibly the loudest release this year in the form of debut album Treats. With complete disregard for arguments about over-compression and the Loud Wars, the duo of Alexis Krauss and Derek Miller produce music with the subtlety of a frag-grenade.

Treats is nothing if not the mark of tenacity. Though the songs have existed in various forms since the collapse of Poison The Well (whom Derek played guitar and co-wrote songs for) in 2004, the album has harnessed whatever peculiar chemistry exists between the two members. Singer and front woman Alexis is keen to talk about her role in this incendiary barrage, in a brief cross-Atlantic phone call. “The vocals in Sleigh Bells is much different from traditional pop hits where they are sitting on top of the entire mix,” explains Alexis. “The vocals become an instrument on the record. So it's much more about the texture, being integral to the song and the impact as a whole more than the individual parts. The vocal is about blending, rubbing against another sound, much less about 'here I am'.”

As much as Sleigh Bells' assault – comprising of huge double-tracked guitars, pounding and distorted electronic drums and Alexis' eclectic throat – appears to rely on sledgehammer dynamics, it's the deft weaving of these blunt instruments with the natural element of volume which has captured listeners.

“I didn't feel like I was competing,” says Alexis, referring to the shrapnel devastation going on around her voice. “It's really important that the vocals have to lay into the mix in a way that follows the exact groove of the rhythm and its very much a team and finding how it all fits in. I was definitely inspired by the tone that each track set. So, on a song like 'Infinity Guitars', obviously the delivery is going to be much more aggressive and menacing while a song like 'Rill Rill', you are occupying a much different state of mind when you're delivering those vocals.”

'Rill Rill' and its Funkadelic-sampling breath of fresh air is Treats giving you some much needed respite. Its shimmering, sunspot-mottled melodies reflect the change of pace and here Sleigh Bells nod not only to cloaked musical influences but to their ability to sabotage their own comfy pigeonhole.

“I really enjoy the challenge of singing many different ways. I love using my voice as an instrument fluctuating between breathy vocals and shouty vocals, for instance. So, for me, that's part of the excitement of recording. It was a challenge but I wouldn't want it any other way.”

For a singer who has absorbed harmonies and blues-soaked tones since a young age, its no surprise her approach to providing the typically accessible 'human' aspect of songs has little in common with less vital-sounding acts. “In terms of references for the record I was inspired by Motown and girl groups like The Shangri-Las. I think they do a really great job of capturing that saccharine sweetness and innocence and yet there's a lot of darkness or even anger and frustration in those vocals and those songs in general. I look up to vocalists who are able to convey both sides; they can get a real raw gritty vocal performance but also something that is very polished. Somebody like Etta James is a good example, able to put a sparkle on one moment and then sound really down in the dumps or almost brutal. She was a huge influence on me growing up.” As these two examples are revelatory singers in their own right (if you've heard neither then please do your best to do so now), Alexis' talk of contrasts and braiding her vocals within the tracks makes even more sense.

Contrary to the rabble-rousing banshee she represents on stage, Alexis is talkative, friendly, even girlish-sounding. You wouldn't think she was one half of a duo who stride onstage to the eerie thrash of Slayer's 'Dead Skin Mask'. Most who attended one of the London shows - see the DiS review here, would agree the intensity of the performance matches the seething mass that garottes your speakers within the 33 minutes contained on Treats.

“We've always given 110% for each one of our live shows but obviously now we're trying to make sure every thing goes pretty seamlessly and we give the best shows that we possibly can because more and more people are at those shows,” agrees Alexis, talking of their first headline tour a week before their return to London. “There was just incredible energy in the rooms and a lot of enthusiasm and it definitely brought us up to the next level in terms of confidence and our excitement about being on the road. Like I said, people are buying tickets to see your band and there's a lot of high expectations.“

These expectations usually arrive with no signifiers as to where the initial big bang occurred, like every single burst of hype that resonates throughout press outlets and quivering music fanatics. Sleigh Bells though have been blessed and possibly, depending on how fortune favours them, cursed with a high-profile connection in controversy-courting musical magpie MIA that certainly puts into shadow their only other low key musical connection; Derek's tenure in once-decent metalcore outfit Poison The Well.

“It actually started with an email. Before Derek and I had even played a show, in September last year. Spike Jonze was actually the one who played her a couple of our demos over his iPhone so you can imagine how good it sounded,” quips Alexis. “But she was immediately taken by it and she emailed Derek. Shortly after she asked Derek to join her in the studio so he quit his job and stayed in the studio with her for a couple of days and produced what is now known as 'Meds and Feds' off of her new album. So that's really how the relationship began and after that she became really adamant in her interest in signing us to N.E.E.T. (MIA's Universal/Interscope subsidiary) so we worked out a relationship between Mom + Pop, our other label, and N.E.E.T. and its been great.”

As far as working practices go, there's no further insight. To be fair to Mathangi Arulpragasam, it's not like she has a lot of time to look after the acts on her label. A shame. MIA might well be one of the more interesting bosses most people could ever have.

“It's really exciting to have her in our court and be able to work with her. At this point it's more about being part of a creative community and the day-to-day running of the business is pretty much Mom + Pop's job. It's the fact that she had interest in us literally before anyone else cared at all which definitely boosted our confidence.” Seeing as Treats was recorded in the first two months of this year, it's been a streamlined and pacey sprint to the collective consciousness of whoever is responsible for those no-doubt gripping discussions that translate into 'buzz' (ugh). The heart of the project though, despite the songs being demoed by Derek before, revolves around the two of them collectively pooling their resources. This is no longer a solo project, if it ever was intended to be.

“When we got into the studio we began collaborating more. There's a few tracks on the album - 'Tell Em', 'Riot Rhythms', 'Tell the Heart' – which definitely became more collaborative in terms of me doing more work on melodies, harmonies and we plan on further explorations of this in the future. It was joyful, the whole experience. We definitely had really high spirits and were really productive and we're really eager to get back into the studio because we left on a really high creative note. There was tonnes of ideas and so little time but we're really happy with the product and we left feeling we'd created the best album we could make in that amount of time.”

Alexis clarifies that there will NOT be a live drummer - “The drums on the record are electronic for a reason, the groove is so meticulous and mechanical and it would just change the sound if we had a live drummer.” - and that new songs are being demoed by Derek now, though nothing new will be played until they've spent the end of the summer in the studio together and the backing tapes are seared into their canon as well as their laptops. She doesn't rule out other musicians joining in though: ”It's not something we're shut down to if we decide it works with the music and is conducive to giving a better show.”
Sleigh Bells are a clawing, seductive two-headed organism whose charms are either swirling amongst the maelstrom they create or totally overwhelmed by it, depending on your point of view. Whichever side you're on, it's hard to coax the other from their chosen position because the craft involved here is in sway to its style and vice versa. The sound, the volume, the noise is all part of what makes Sleigh Bells who they are. Obnoxiously loud? Not a bit of it. Rhythmically and texturally volatile? Sounds that way. A world away from merely yelping in your ear with no cause, no intricacy and no understanding of the majestic beauty in the impact of sound upon receptors, this duo are playing with convention almost haphazardly. The intended result? For those who've ever celebrated life to music – and if you haven't, I'd be surprised you're reading this at all - that should be all too obvious.