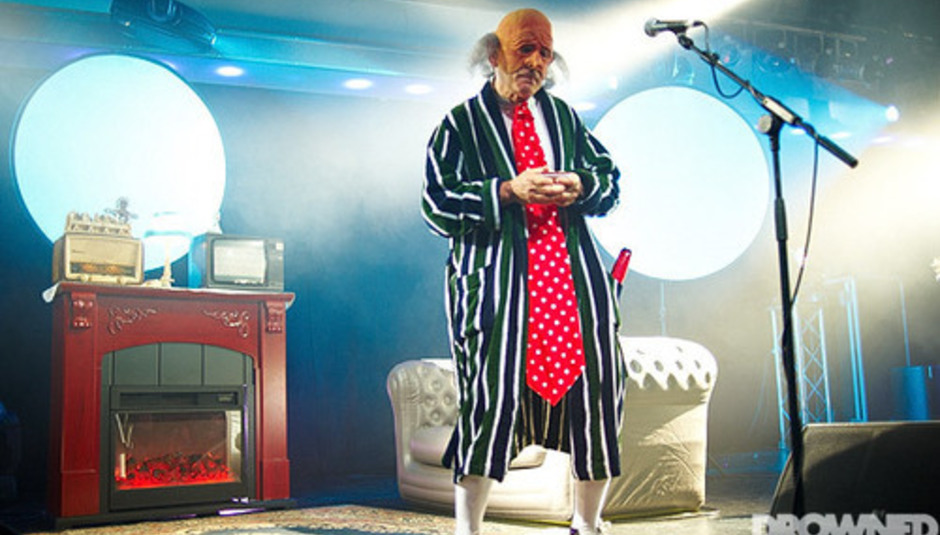 by Dom Gourlay May 13th, 2010
and Gary Wolstenholme

The honour of curating the first ATP of 2010 went to Simpsons creator Matt Groening, and despite it not being the busiest of ATPs in terms of punters, or brightest in terms of sunshine, no one can have many complaints about this year's line-up or the subsequent performances enjoyed over the course of the weekend.

Intrepid DiS reporters Dom Gourlay and Mark Ward went along to gawp at what is widely being heralded as one of the best ATPs to date... Here are their tales.

For the majority of their set, Broadcast seem too keen to show off how many ideas they have than to bother convincing you that any of them are any good. Before any kind of rhythm or groove is settled into it’s crashed out of place by the next whorl of sound. Happily the last 20 minutes sees the focus fully on the music, with James Cargill having picked up a guitar and Trish Keenan having made a blink-and-you’d-miss-it dash off stage, the pulsating rhythms reveal the side of the Warp act that was always so easy to love. (MW)

There's something engaging about Cold Cave's eerie death disco, even in this early Friday evening slot. The silhouettes of Wesley Eisold and Caralee McElroy are barely visible through the dry ice and murky lighting, but their New Order tinged electro-rock turns the centre stage into a visual carbon copy of New York's legendary Danceteria for forty-five minutes, which we like very much. (DG)

After the sad death of Ron Asheton last year Iggy Pop’s ability to convince original Raw Power guitarist James Williamson to return to the touring fold and to play tracks from that record for the first time since the Stooges reformed made for a mouth watering prospect. Unfortunately the group seem to have lost more than just Asheton. What was so surprisingly vital five years ago has increasingly become formulaic, and although Raw Power remains a glorious work, it wasn’t heard here in all its glory. Muddy sound on the main stage dogged the performance, and while Iggy still hurls himself around like a hyperactive teenager - seeing this band is never no fun - it has just been so much more fun before. (MW) Matt Groening’s predilection for world acts was a key factor in giving his choice of line up such an enjoyably varied feel. He brought no better musicians to Minehead than Malian kora master Toumani Diabate and his seven-piece ensemble. A naturally charismatic leader, Diabate would have won over the audience with the sheer pleasure he imbues even if his music wasn’t such a delight. Spectacular, joyous and played with a rare degree of perfection, grins were locked on the faces of band and audience throughout. (MW)

Call them seminal, twee, former mates of Kurt Cobain or Japan's only all-girl Ramones tribute band, but Shonen Knife are an unerringly energetic bundle of fun that sparks off possibly the most polite moshpit DiS has ever set foot in. With a set comprised from over 25 years worth of material including such gems as 'Twist Barbie' and 'Bear Up Bison', its hard to envisage where they could go wrong - and they don't. (DG)

The hermetic nature of each of Liars’ records is often cited as one of their greatest strengths. It poses problems when they are required to put together the kind of career-spanning set they choose to at ATP. There’s a lot of great material, it just never settles into a coherent show. The giant figure of Angus Andrew nonetheless builds the late night crowd into a fair old frenzy as he stumbles and bundles his way round stage. (MW)

There is a church onsite at Minehead Butlins, although I’ve never known a service to be scheduled during an ATP weekend. Instead Boredoms are on hand to provide festival-goers with the nearest thing to a religious experience their heathen bodies are likely to enjoy. Playing with seven of the finest drummers you’re likely to see share a stage - one of whom arrives ten minutes in, floating over the crowd carried on a platform with full kit attached - they build a series of battering rhythms into glorious crescendo after glorious crescendo. Leader EYE alternates between conducting the drummers, howling mantras, churning out electronic noise and carefully hammering on the incredible instruments stacked up behind him – seemingly eight guitars welded together augmented by another two walls of table guitars. They play early on both the Saturday and Sunday, demonstrating the tight rhythmic structure Boadrum and the freedom EYE allows himself with his electronic inteventions to the faithful who attend both shows. Yojiro provides some wonderfully incongrous heavy rock riffage in one of the piecea many moments of true transcendence. Yoshimi’s joyous face as the band approach the last surge says it all: nobody looks happier all weekend. (MW)

Having consumed far too much vodka the night before, the happy-go-lucky country pop of Daniel Smith and his Danielson 'family' seems like a perfect way to restore parity. Having come onstage to possibly the smallest crowd we've ever witnessed at one of these events, the room soon fills up to their unfeasibly joyous melodies compounded with the most impressive uniforms of the weekend (a cross between the confederate army and the Von Trappe family). (DG)

Previous ATPs may have seen the Pavillion Stage's sound come under criticism, but for Deerhunter, a band whose dynamics rely so heavily on sonic perfection, it's simply immaculate. 'Strange Lights' and 'Never Stops' are magnificent in their execution, while Bradford Cox and co's relentless exercise in proffering as much feedback as humanly possible through the monitors is as good a sound test as any to disprove those criticisms once and for all. (DG)

Konono No.1 do a hell of a lot with very little. Often performing with a membership in double figures, they arrive from Kinshasa with a trim complement of six stern-looking musicians. Their music is similarly minimal - tight, intense patterns are struck from their electrified thumb pianos and repeated ad infinitum. It’s a mesmerising trick, and towards the end of the set new levels are added with some unexpected vocal harmonies. Paradoxically deeply progressive and rooted in tribal tradition, they achieve a trancelike intensity throughout and even hint at the odd smile as they take their rapturous ovation. Later in the evening they return in for the surprise gig of the weekend, teaming up with all the non-Boredoms Boadrum drummers and a certain Jason Spaceman for a not-so-secret secret gig that rams the tiny stage of Jumpin Jaks. Occasional squalls of feedback aside, the music they play is a true wonder, even if the moods onstage seem pretty foul. (MW)

Bringing a carefully constructed show that’s as much performance art as gig would be a risk for most acts, but after four decades surfing the art rock avant-garde it’s the only option for The Residents. Their leader, currently calling himself ‘Randy’, hobbles onstage wearing a slap-headed, crook-nosed mask that covers half his face, whilst on his flanks the other two sit wearing full fly-like headgear. Somewhere along the way they wrap some truly beautiful songs into their mix of industrial thrum and horror movie pastiche. Their cover of Hank Williams’ ‘Six More Mile (to the Graveyard)’ is a case in point, with Randy’s light slow vocal beautifully etched against an eerie ambient background. (MW) One of the traits that makes ATP such a special event on the festival calendar are those previously unknown discoveries guaranteed to brighten up the weekend. One of those was Mali's Amadou And Mariam, and their intrinsic mix of African rhythms and Western melodies turns the Pavillion into one massively eclectic dancefloor. (DG)

As by far the most mainstream act on the bill, it was perhaps something of a surprise to learn The XX had been given two slots at this most diverse of festivals. Nevertheless, a fairly large and enthusiastic crowd had turned out to witness one of their first shows as a three-piece, and certainly from the perspective of set choices they delivered from start to finish. Sadly, the soundman appeared to have other ideas and the first half of the set was punctuated by various states of rumbling noises. Fortunately, normality ensued for 'VCR' and continued therein after. Phew. (DG)

A late night gig on the smallest scheduled stage was the ideal slot for the grubby funk of James Chance. Playing with a well-drilled French group he’s utilised for his last few jaunts over to Europe, the No Wave legend made for a disturbing figure with his thinning quiff and stiff white-suit. He’s still got that arresting voice though, and his saxophone squeals are as urgent as ever. Seeing the great man honking out tunes on his sax as he sat selling merch the next day was another of the delights that only ATP provides. (MW) Daniel Johnston offers a dangerously fragile, yet encouragingly sincere performance that leaves hardly a dry eye in the house by the end. Inbetween song banter consists of Johnston talking about a nightmare he'd had recently where he'd been arrested and charged with murder for trying to take his own life and even admitting he's mentally ill at one point, but 'True Love Will Find You In The End' is immaculate and later that evening, he's mobbed by all and sundry for autographs and mementos outside The Yacht Club eaterie. (DG)

When Spiritualized last played ATP, almost a year ago to the day, their set was a mixed bag that proved largely underwhelming. This year however, their decision to play Ladies And Gentlemen We Are Floating In Space put matters to rights. Aided by a full orchestra and choir, Jason Pierce and co. bring the house down. The title track now sees the much-lamented 'Elvis sample' sang by the choir, 'Come Together' proves devastating, 'Broken Heart' achingly beautiful, while the complex arrangements of 'Cop Shoot Cop' sound exquisite and masterful with each passing minute. That they play to one of the biggest crowds of the weekend probably speaks volumes for the reverence Ladies And Gentlemen... is held and their performance justifies its grand status from beginning to end. (DG)

If the opening slot on the Centre Stage at any given ATP has too frequently been filled by the most forgettable of acts, the final slot of the weekend has all too often proved the most unforgiving. Three days of imbibing alcohol, music and whatever else is at hand can leave audience and acts out of step with each other by 1am on Sunday. No such problems befell CocoRosie, who turned in a performance to match any of the three days. The subtleties of their unique sound still stand out in an eclectic weekend, as those two strange voices weave between beatboxing and piano motifs. In a set heavy on new material, 'K-Hole' remains a stand out, its intricate beauty sending some very happy campers into the night. (MW)