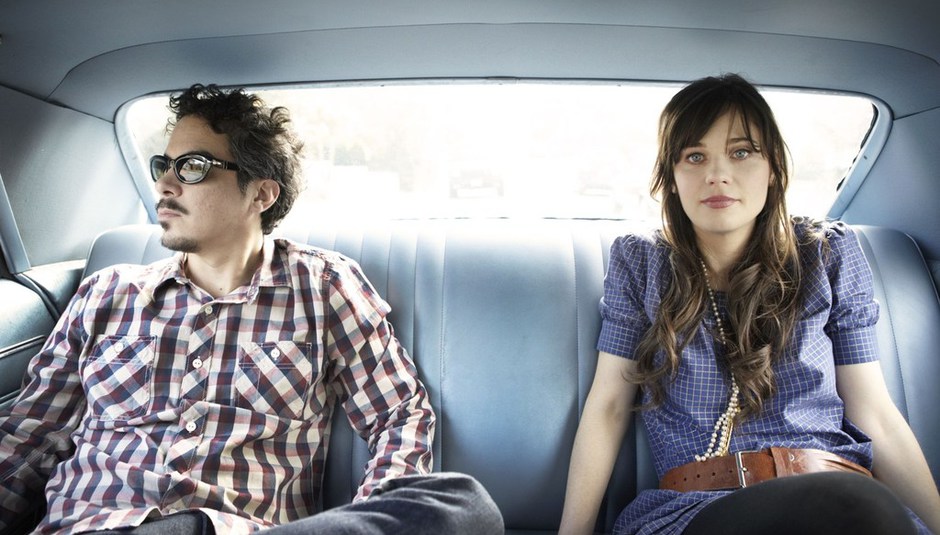 DiS meets She & Him

She & Him played their first mainland European show recently, in Barcelona. Between covering the likes of Willie Nelson and Chuck Berry, skipping around the stage, pounding a Wurlitzer and generally being adored by everyone in attendance, Zooey Deschanel brought songs from Volume One and Two alive in a manner that was both genuinely wonderful and oddly intimate, given the size of the venue: like a high school ball or somesuch, heaped with sunny nostalgia and the odd killer guitar solo.

DiS didn’t actually really meet the pair this time round, but we did get the chance to send Zooey some questions.

Volume One received an overwhelmingly positive response from critics. Did it help allay any fears that you might be perceived as an actress’s vanity project, or was that never really an issue?

No, I’m not really concerned with what people think, just as I hope the audience for the record won’t be concerned with what I think. I hope each person responds to it naturally without any agenda of mine seeping into the matter. Ideally audience and artist should be uncorrupted by each other.

The new album was recorded last year in your respective hometowns of Los Angeles, California and Portland, Oregon. Was it fun getting back together for the sessions, and were the same key personnel involved? Did it feel different at all, or did you just slip back into the groove?

Absolutely. It was most of the same people, Mike Coykendall was our recording engineer, and Mike Mogis mixed the record. We had the same string players and pedal steel player. Scott McPherson, who we’ve been touring with the past few years, played drums. It was like a happy reunion.

Volume One began with the relatively sparse ‘Sentimental Heart’, opening up and becoming more expansive as it went along. Volume Two’s ‘Thieves’ is really sweeping and grand from the get-go, and seems to encapsulate a lot of the themes that crop up over the remaining twelve songs. Was placing it at the start of the album a deliberate statement of intent?

In terms of song order, it’s sort of an intuitive thing. You move songs around until the record sounds right. It’s the last decision you make so at that point you know the record so well the right songs just seem to fall into place. ‘Thieves’ just seemed like the right choice for this record and ‘Sentimental Heart’ for Volume One.

The harmonies and backing vocals are really wonderful throughout – it certainly wouldn’t be the same record without them. Are you pleased with how they turned out? Was getting Tilly and the Wall in for ‘In the Sun’ something you guys planned, or did it just happen?

I’ve been a harmony enthusiast since I was a child, singing in choir and with friends growing up. I always put a lot of harmonies on my demos – arranging vocals is one of my absolute favourite things to do. I had recorded a demo of ‘If You Can’t Sleep’ that was all my multi-tracked vocals instead of instruments, so we ended up doing that in the studio. There are something like 20 tracks of just my voice in an attempt to sound like a string section, which was very fun. For ‘In the Sun’, Tilly and the Wall came in at the very end of the process. They did the call and response section of the song. We were almost completely done with the song, all of the harmonies had been recorded by myself and the call and response section was just Matt and me. It occurred to us while the song was being mixed, that the call and response section could use a bit more energy. Tilly and the Wall came in recorded it with our mixing engineer, Mike Mogis, in Omaha. Neither Matt nor I was there, but they did a great job and added a lot of enthusiasm to the song!

‘Don’t Look Back’ riffs on Ancient Greek legend and the Orpheus and Eurydice myth. How did this make it into your songwriting?

I always loved the movie Black Orpheus, and loved reading Greek myths as a child. I liked the idea of tying the Orpheus myth into a story inside of a song, it just seemed like an effective way to tell the story.

I was curious about the reference to MTV’s Cribs in ‘Sing’ as well. The song seems to be about someone in the entertainment industry who doesn’t quite realise how lucky they are – is it based on anyone in particular, or just a ‘type’ you’ve encountered?

As big as much of the instrumentation and production on the album is, lyrically it still feels like a very intimate affair. How do you go about the songwriting process?

I think I write more about emotions than anything, which is as much dictated by the way melody and chord progression makes me feel while I am writing them. Sometimes I will start going in one direction lyrically and then I will be playing around with a melody and a chord progression and it makes more sense to turn the positive into a negative, or change perspective etc., and then all of a sudden the song falls into place.

Volume One was often referred to as a summery yet bittersweet collection of songs, but Two arguably takes this to new levels, where even something like ‘In the Sun’ – which sounds so breezy – is ultimately about a lover expressing inward doubts. Is that kind of juxtaposition appealing to you on an artistic level?

Well, I always enjoy such a juxtaposition. She & Him is a happy-sad band in general.

The idea of human comfort and reassurance seems to surface again and again on the album, from ‘Thieves’ through ‘Me and You’, ‘I’m Gonna Make it Better’ and most of all on ‘If You Can’t Sleep’, where the central lyric “Goodbye shadows” could be seen as emblematic of the album as a whole. Would you agree with that notion?

Yes. Most of the songs are philosophical, sometimes disguised as stories. Many of them sort of pep talks. I find it satisfying to write this sort of tune.

On a broader level, it also suggests that you put a lot of stock in the idea of music functioning to offer simple hope and enjoyment, without needing to be rigorous or overly intellectual…is that true for you?

Having a personal philosophy so to speak has brought me great comfort. I guess I cherish the moments when I have been able to turn something negative on its ear and seen it from another perspective. I feel inspired by those moments.

I was wondering if you have a favourite song of Matt’s?

So hard to choose! The first song I ever heard of Matt’s was ‘Vincent O’Brien’, and I was completely blown away by the songwriting, the performance, the sentiment. But there are so many I love, there’s one from his last album called ‘One Hundred Million Years’. He played it for me right after he had written it and I couldn't believe it wasn't an old Carter Family song or something. It’s very timeless.

Are you looking forward to Matt Groening’s ATP? And how was playing one of Cletus’s daughters in The Simpsons?

Incredible! I love The Simpsons, so getting to be in an episode was one of the crowning achievements of my career! We are very honoured to play ATP and have been chosen by Mr. Groening!