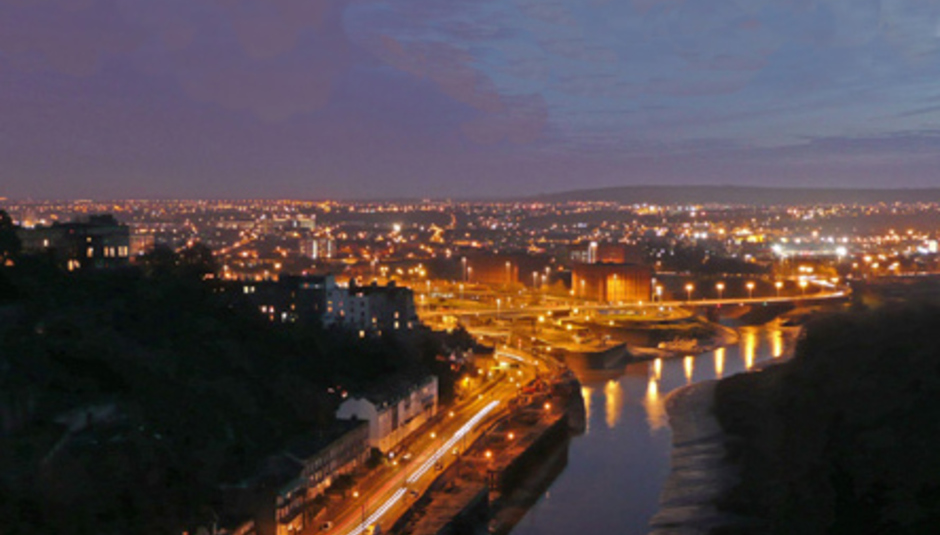 The first in our local scene reports from our DiS scribe in Bristol...

There’s always a risk, when writing a city focus column, that the result will only prove remotely interesting to people actually living there. With that in mind, and bolstered by the rude health of its music scene, hopefully Drowned In Bristol should dig slightly deeper than just a surface assessment of what’s going on and where. There’s a real wealth of material finding its way out of our West Country hub into the big bad world, but just as much that seems to remain largely a local concern. The plan is to try and capture a bit of both. In any case, it’s nigh on impossible to try and fit everything, so consider this a snapshot of a far bigger picture.

The ‘Bristol sound’ was all the rage around coffee tables for a while back there but, barring the fact that it ended up being used as catch-all tar for anything under the label ‘trip-hop’ (eurgh), it didn’t really mean anything concrete. If anything, the city’s rich history does a good job of debunking the idea that any simply defined sound exists at all. Sure, there are touchstones, many of which are as relevant to Bristol’s local culture now as they were in the late eighties and early nineties: bass-weight, dub and reggae, hip-hop, soundsystem culture, community operations. These influences and more operate on a host of often tight-knit musical groupings, all operating within a small enough space that ideas seem to flow effortlessly between them. And though it boasts some truly unique and fantastic bands – hands up, Zun Zun Egui - it’s still largely electronic stuff that forms the vanguard of Bristol’s homegrown talent further afield, with the city’s vital contributions to dubstep and its variants over the last few years pretty tough to ignore.

In terms of venues for all this to happen within, Bristol is teeming with them. First, it’s worth mentioning the sad demise of the Tube at the start of this year. One of my favourite clubs in this or any city, it lived up to its name, tacking a long and narrow bar/seating space onto a darkened dancefloor with a truly bracing soundsystem. In the wake of its demise, many of the city’s best club nights have found their way to Basement 45 a couple of streets away. And to be fair, it’s not a bad replacement – wider, (just about) airier and offering similar ribcage-rattling volume.

The Croft on Stokes Croft offers similar clubbing fare, alongside a fair few metal and hardcore gigs and the odd free jazz night. The Cube Microplex just around the corner seems to have been holding fewer gigs than usual in the last few months, but in the past has played host to some of my most memorable musical experiences – the sight and sound of Stars Of The Lid in the Lynchian confines of a tiny independent cinema was truly revelatory. For guests from further afield, both infamous gigboat Thekla and the waterfront Arnolfini gallery tend towards wallet-destroying schedules.

On any given day you’re likely to find something worthy of investigation, local or otherwise. In the last month or so (though admittedly I’ve managed to miss out on them all) there have been free appearances from Flying Lotus associate Nosaj Thing, sample-heavy beatfreak Gold Panda, Minotaur Shock and the excellent Mount Kimbie. The monthly Dubloaded session at the Croft is always a must - the last featured the debut outing of Addison Groove (whose ‘Footcrab’ has become an anthem well outside of its expected circles of influence). Crazylegs’ nights are similarly essential – the next, on 8th May, features the sounds of Joy Orbison, Punch Drunk Records head Peverelist and Swindle.

As I write, my ears are still ringing from a thorough purging at Subloaded & Teachings In Dub at the Trinity Centre on the 16th April. A launch party for Dubkasm’s rather lovely Transform I remix album (more about that one below…), the later portion of the evening was taken up by back-to-back sets from some of the city’s most respected dubstep practitioners. In true MBV style earplugs were handed out on the door, and the volume at the entrance was about as high as you’d usually find right down at the front of most clubs. Physically punishing stuff, and real justification for the description of bass frequencies as carrying ‘weight’ – but particular mention should definitely be made of Guido. His set alongside Headhunter showcased tracks from his excellent upcoming album Anidea, melding a melodic suss ripped straight from R’n’B to truly mindbending slabs of sub-bass. Oh, and in the case of ‘Mad Sax’, cheekily sleazy grooves that thrust with bawdy seventies excess.

Technicolour Warp wunderkind Hudson Mohawke is bringing his live show to Thekla on 29th April. His debut album Butter took quite some getting used to, its garish synths and eighties inspired harmonics initially summoning images of some Ballardian cocaine nightmare, but six months down the line it’s finally begun to make a twisted kind of sense. The razor edges of tracks like ‘Gluetooth’ and ‘Zoo0o00om’ (sic) are tempered by softer bass frequencies, and the final third of the album finds itself in genuinely haunting territory. The yang to Flying Lotus’ zen-like yin, perhaps. One word of warning – pack a pair of earplugs, or you’ll be haunted by the treble from this one for weeks.

This coming month or so sees a set of particularly exciting gigs from reliably brilliant promoters Qu Junktions. Immediately post-ATP they’ve invited Konono No.1 and Omar Souleyman to town for a gig that promises to be one of the city’s most electrifying for quite some time. That’s happening at Metropolis on 11th May. Headier, but no less intense, should be psych supergroup-to-end-all-supergroups Rangda, who play at the Croft alongside Acid Mother’s Temple on 28th May. Featuring the all-star (well, of sorts) line up of Ben Chasny, Sir Richard Bishop and human drumkit Chris Corsano, their debut album False Flag is an exhilarating set of sun-frazzled instrumentals that manages to make Comets On Fire look positively tame by comparison.

Released, and being released Quite aside from being a compulsively listenable and frequently brilliant reconstruction of Dubkasm’s Transform I album, this upcoming remix project acts as a tidy summary of – and an excellent introduction to – some of the Bristol dubstep community’s best-known practitioners. The rootsy feel of the source material is faithfully adhered to throughout, lending coherence despite the oft-idiosyncratic nature of each version. So Peverelist’s take on ‘Strictly Ital’ is equally indebted to jungle and techno, both Gemmy and Guido’s tracks drown samples of the original instrumentation in synthetic melody and Forsaken turns ‘Moses’ into a characteristically bizarre Latinised stomp. Best of all has to be Gatekeeper & Appleblim’s bewitching turn on ‘Respect I-Spek’, splicing the original into a mini-epic that’s equal parts devotional ritualism and club propulsion. The Idle Hands (Link: http://soundcloud.com/idle-hands-bristol) imprint, run out of Rooted Records, reaches its third release in early May with a pair of slo-mo house gems from local boy Kowton. After the humid grooves of Atki2 & Dub Boy’s anthemic ‘Tigerflower’ on the label’s second 12”, these tracks are stripped-back exercises in atmosphere akin to his bewitching ‘Stasis (G Mix)’. ‘Basic Music Knowledge’ is built like a house track but swings like garage, all smoothly flowing lines and blank pulses of sub, and ‘Hunger’ glows with a warm intensity appropriate to its title. If you’ve not either a) heard, or b) heard of Joker by this point, it might be worth peeking your head out from under that rock. If one musician from Bristol has ‘big things’ written all over him – especially this year, with an upcoming album – it’s Joker. His music is absolutely huge in all senses of the word, larger than life and dense to the point of crushing, but carries an undeniable pop nous. Both closely ‘Tron’ is no exception; it’s cybercrunk from some distant future, and it’s great – check it out on Soundcloud [here](http://soundcloud.com/multiverse/sets/joker-tron-vip-mix ).

Another anthem, albeit an unlikely one. Headhunter is a well-known figure around these parts, his techno-tinged dubstep productions regularly making their way towards London, Berlin and beyond. His newly christened Addison Groove alias showcases a different side of his musical personality, one inspired by the rough ‘n’ ready 808 sounds of Chicago juke. ‘Footcrab’ is a deliciously gonzo creation, revolving around a stupidly catchy vocal refrain (listen, and feel it get stuck permanently in the grey matter) and pulsing kick drum. ‘Dumbshit’ on the other side hits just as hard, and if the new tracks he debuted on Mary Anne Hobbs’ Radio 1 show recently are anything to go by, expect these sounds to infiltrate far beyond any scene’s confines before long.

DJ Pinch’s Tectonic already has a fair claim to be one of the seminal dubstep labels. He’s released 12”s from most of the genre’s progenitors and provided a platform for local releases, as well as putting out his own Underwater Dancehall album and two outings from 2562. In the past he’s discussed the idea that Tectonic finds its own sound – that there are tracks that belong on the label, and those that don’t. Given its past track record, it was always safe to assume that the emphasis was on skeletal bass-based stuff, but this month he’s thrown a curveball of sorts with a mini-album from New Yorker Pursuit Grooves, Fox Trot Mannerisms.

Okay, so it’s not really a ‘Bristol’ thing per se, but as her label is based here it is very much worth a mention. Essentially a hybrid of a whole range of different genres, its primary signifiers are hip-hop – opener ‘Pressure’ is a deliciously laid-back trip through lounge piano and sweetly spoken vocals – and soul, especially during the astral lullaby ‘Shabaps’. There’s an eccentricity at play here that shares something with Erykah Badu’s New Amerykah albums, but Pursuit Grooves’ music is entirely her own, mapping out a nocturnal cityscape in shades of blue and grey. Certainly her home courses through its veins, but as the UK starts to get hotter again it feels spot-on for here as well.

The Primitives @ the Bodega, Nottingh...