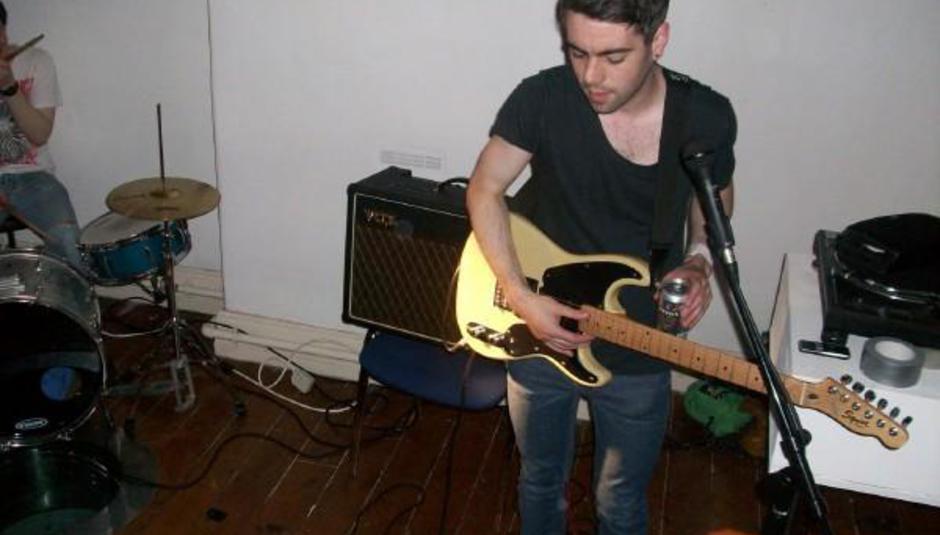 The saying "less is more" has an appropriate ring to it this evening. At no one time will the stage be occupied by more than three persons, this despite a four-band bill. Thankfully, the lack of numbers has no detrimental effect, even in the most primitive of circumstances.

Because that would be the best way to describe openers Bruce 'n' Carl, a two-man garage racket courtesy of Hipshakes drummer Bruce Sargent and Midnight Kicks guitarist Carl Stone. Simplistic from start to finish, their three-chord salvos of sub-Ramones clatter don't tread any new ground but it's a pulsating start to this rainy Good Friday evening's entertainment, culminating in a fearsome run through of rock'n'roll standard 'Do You Wanna Dance?' in typically breathless fashion.

Next up are Barcelona based duo Za!, a most peculiar combination whose opening gambit is to chant wildly whilst flailing around the stage. It doesn't make much sense, yet exudes a captivating air about it that doesn't let up until the end of their set. In between, there's all sorts of bizarre kinds of instrumentation, mostly fed through loops of delay and reverb that recalls the Butthole Surfers at their freakiest or Miles Davis in his most smacked out phase. One minute they're regaling us with spaced out jazz odysseys, the next tumultuous pockets of noise reminiscent of early Lightning Bolt or Melt Banana. Recent album Macumba O Muerte picked up all sorts of plaudits back in their homeland at the tail end of last year, and we'd wholeheartedly recommend you catch them at this year's Primavera Festival (those fortunate enough to be in possession of a ticket). Truly mindboggling.

Brighton all girl trio La La Vasquez give the impression they'll scream and scream and scream until they're sick, or worst case scenario, we are. However, despite the brattish demeanour, they also come complete with a songbook containing a handful of discordant tunes. The bitter 'Clare Savage' sounds like early nineties riot girl combo Voodoo Queens spitting out their dummies over lunch while 'Dairy Queen' is a heartfelt blast of pugilistic angst that wouldn't go amiss if Stateside kindred spirits the Dum Dum Girls chose to cover it on their forthcoming UK tour. Ah, cover versions. La La Vasquez have a couple of interesting ones up their sleeve that do irony (New Order's 'Blue Monday' as a two-minute lo-fi thrash anyone?) and pay homage (headliners Girls Names' 'If I Could Go Away' delivered impeccably) respectively. Customary mid-set strops between band members aside, La La Vasquez take the C86 blueprint, mix it with a dash of pre-grunge riot girl and in the present climate of no wave lo-fi manage to sound remarkably current.

Belfast trio Girls Names have been on the tips of many a tongue for a good while now, and it only takes approximately thirty seconds of opener 'Shouldn't Care' to realise why. Their mix of post-punk, shambolic surf and positive noise is a joy to behold, sounding like a mixture of George Best era Wedding Present, The Barracudas and The Mighty Lemon Drops with the Mary Chain occasionally popping by for tea and biscuits. The energetic 'Warm Hands, Cold Heart' and forthcoming 45 'Graveyard' may be punk rock in spirit but sparkle with a geekish charm only betrayed by the furious howl of feedback that greets each and every outro. Along with the likes of Spectrals, Fair Ohs and occasional sparring partners Veronica Falls, Girls Names strike an almighty chord for the homegrown underground scene that's been severely lacking in recent years, but appears to be making up for lost time now. By the end, singing guitarist Cathal Cully looks genuinely shattered, almost as if he's just completed a full twenty-six miles of the London Marathon. However, it's surely mission accomplished as the queue for his band's merchandise at the end tells its own story that these Girls Names could very well be household ones before the year's out.