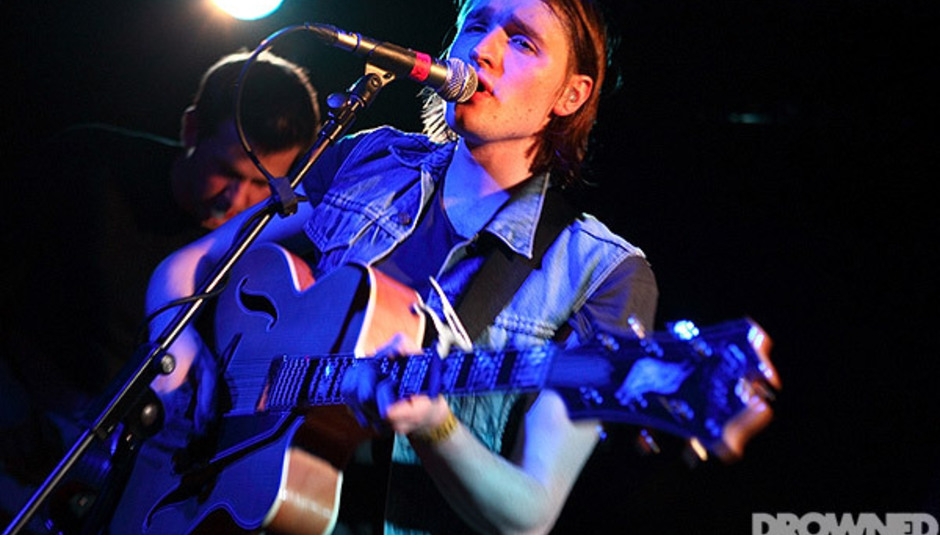 Where would the average motorist be without the aid of a satellite navigation system? Nowhere near the Queen's Hall that's for sure, tucked away as it is deep in the confines of Leicester University's muddled campus. Nevertheless, after countless drives around the city's ring road and several curses at the lack of viable signposts later, the stressful negotiation proves worthwhile as all three of tonight's intrinsically diverse acts shine in their own rights.

First up is Lone Wolf, now signed to Bella Union records and bereft of the plain Paul Marshall moniker his parents adorned him with. Despite a sore throat, aided and abetted by a pack or three's worth of Fisherman's Friends, he manages to deliver a set worthy of all the critical acclaim currently being steered in his direction. Unaccompanied tonight (and indeed throughout the whole of this tour), the stripped down versions of 'Fifteen Letters' and 'This Is War', two of the many highlights from his soon to be released debut long player The Devil And I suggest that while short of the instrumentation on record, there is no lacking in presence live. Despite being hidden for a large part of his set behind a dense red fug of smoke, Lone Wolf strikes a captivating blow for singer-songwriters everywhere, his clarion call of "we could use your blood to paint this town red" resonating long into the night.

Despite counting a former member of both The Verve and Blur among their ranks, Erland And The Carnival are about as far away from salient soundscapes and belligerent Britpop as is possible to be. Instead, they're a far more curious proposition than anyone could have expected, re-discovering the obscure works of people like Leonard Cohen and Jackson Frank among others and turning them into part-contemporary, occasionally experimental folk ditties. At their most accessible it's reminiscent of both The Coral and The Divine Comedy, no bad thing on either part, other times the more introverted terrains of Sunhouse or The Woodentops are clearer reference points. Standing out like a beacon through their entire set is frontman Erland Cooper, a pure showman in his own right. Introducing his band's signature tune he bellows "Let's play a game...my name is carnival!" Precisely thirty minutes and nine songs later the room is in full agreement, not to mention providing further evidence in the process that aforementioned one-time associate of Richard Ashcroft Simon Tong can hold his head up high safe in the knowledge that this, alongside his other occasional project The Good The Bad & The Queen makes him easily the most creative and inventive ex-member of a certain Wigan outfit post-Urban Hymns.

For Wild Beasts, their gradual elevation to venues of this size is testament to the fantastic twelve months they've encountered. While the potential was always there, last year's Two Dancers represented something of a triumph for both band and those despondent at the current UK music scene in general. Unique in every way, from Hayden Thorp's deft storytelling and vocal annunciations through to the diverse musical arrangements that ultimately set it apart from anything else released on these shores in recent times, although the rewards have been long coming tonight's capacity crowd is a striking indication of even bigger things to come in the future.

What's more, there's a burgeoning confidence all around the stage, an almost new-found belief that sees Thorp shaking his fists at various points of each song, urging the crowd to get involved whether that be to dance like its Amnesia 1990 or just sing along hazily, high notes or otherwise. Despite there being no new material this evening - drummer Chris Talbot tells us afterwards that there are several works in progress with the plan being to hibernate in the studio at the back end of the year - every single song, whether it be from the more familiar Two Dancers or less celebrated but of immense stature Limbo Panto is greeted with a raucous cheer. Bearing that in mind, the likes of 'This Is Our Lot' and 'All The King's Men' blend effortlessly with 'The Devil's Crayon' and rarely aired cuts from the first record such as 'Please, Sir' and 'Vigil For A Fuddy Duddy', each one delivered with an elegant sheen.

Even the normally predictable encore throws up one more surprise in the shape of 'Cheerio Chaps, Cheerio Goodbye', which proves to be the most fitting of endings to a near perfect evening.