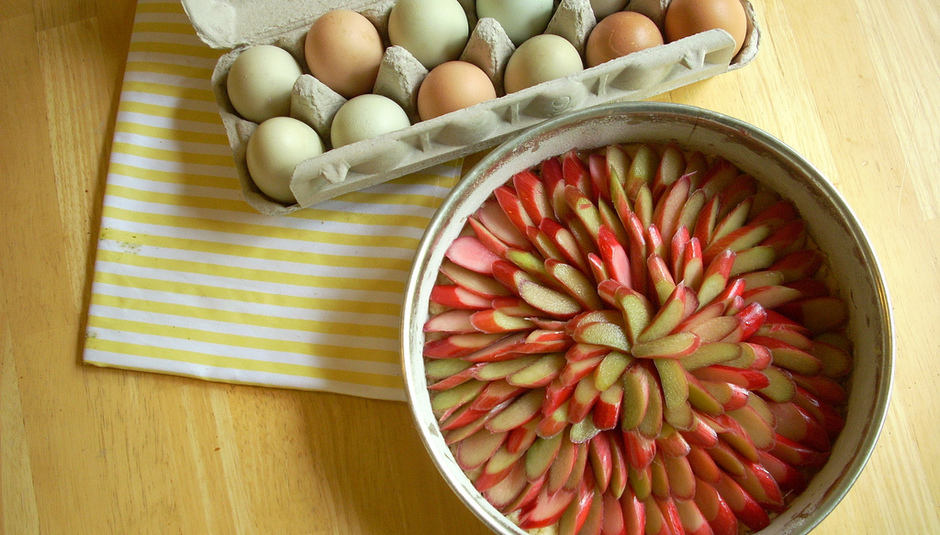 Following the unanticipated success of the Grizzly Bear 'Gumbo' recipe last year on DiS, we saw White Hinterland's twitter, with Casey Dienel offering up daily recipes and thought, in the run-up to their new record Kairos, rather than just review it and give away some tracks to showcase their snow-capped electronica (think Ladytron and Broadcast with a generous dose of Lykke Li, Bat for Lashes and JJ whisked in), we'd, er, make them sing for their supper; or rather give you some ideas of what you can eat for yours...

Before we begin, here's their cover of Justin Timberlake's 'My Love' to listen to whilst you're cooking:

In April of 2008, I met with Alexis to pitch a few ideas to him. At that point, I don’t think we were even calling it a record. I had a bunch of stuff that I was sure he would balk at (“Ok, so imagine a WH record, but this time with dance music”) but he never batted so much as an eye. I brought him a demo of Thunderbird where I was beat-boxing and this rhubarb tart cake. Admittedly, I’m shameless about baking sweets for people when I work with them. I can’t say it’s entirely selfless—baking is something that is very fun for me to do. I don’t know if this cake had anything to do with Alexis’ saying yes, but it certainly didn’t hurt.

The only unappealing thing about rhubarb is its reediness, which is why its so often cooked down into mush for pies and crisps. Thankfully that texture can be easily amended by a quick ‘ceviche’ in citrus juice. It’s such a persistent vegetable, withstanding the cold, fickle weather typical of Spring, that I prefer to preserve its integrity in a spiral tart rather than simmering it away into compote. That’s where this recipe started from. For me, the flush of pink that rhubarb brings to my farmer’s market is always the first true sign that Winter has left us. I know it may be a little early to be talking about Springtime and Rhubarb, but I wanted to leave you with something to look forward to.

I like to soak the rhubarb in orange juice before assembling the tart—this will help make the rhubarb tender while retaining its shape while baking so you don’t end up with rhubarb mush. Use tender, slim stalks of rhubarb for the best results. The batter comes together very quickly in a food processor.

For The Filling & Glaze

1 Tbs. apricot preserves (without any large pieces of fruit)

In a large bowl, combine the rhubarb, orange juice, lime juice, and sugar. Mix to coat and let it sit for 10 minutes to “ceviche” the rhubarb.

Preheat the oven to 350 degrees. Butter and flour a 9-inch springform pan.

In the bowl of your food processor, combine the flour, sugar, baking powder, and salt. Pulse to combine.

Add to the bowl of the food processor the butter, pulse until the dough has no large pieces and has a crumbly texture.

Add the egg and vanilla extract to the flour mixture, pulse again until a dough forms, about 30 seconds.

Dump the dough out into the center of the spring-form pan. Using your knuckles (if you use your fingertips, the dough is more likely to stick), nudge the dough into the bottom of pan. Work from the center to the edges of the pan, and once you’ve spread it pretty evenly, work your fingertips around the edges to create a slight “crater.” This will be the crust of your tart.

Strain the rhubarb into a small bowl, reserving the liquid for the glaze.

In a small saucepan, cook the reserved liquid for the glaze down until it has reduced by half, about 20 minutes. At this point, whisk in a tablespoon of smooth apricot preserves. Simmer for 5 minutes, then take it off the heat.

Arrange the rhubarb in a spiral pattern on the dough—don’t worry about it looking overcrowded. Use as much of the rhubarb as you possibly can, because as it cooks down, you don’t want to have gaps. Once the rhubarb is assembled, place in the oven for 45 minutes.

While the cake is baking, in a small bowl whisky together the egg, melted butter, sugar, and cardamom to make the topping. When the first 45 minutes are up, remove the cake from the oven and spoon the topping evenly over the top. It will look like a horrible mess, but don’t worry about that. It will all be fine.

Bake the cake for another 20 minutes, and remove once the cake and topping looks set and the rhubarb has become slightly carmelized.

Let the cake cool for an hour on a rack. Take a small sharp knife to loosen the edges of the pan, then unlock the sides of the pan and transfer the cake to a plate or cake stand.

Reheat the glaze over low heat. Using a pastry brush, apply the glaze to the rhubarb cake. Sprinkle with orange zest and serve w/ a dollop of crème fraiche. Tastes even better the next day! Serves 6-8. White Hinterland's new album Kairos is out this week on Dead Oceans.