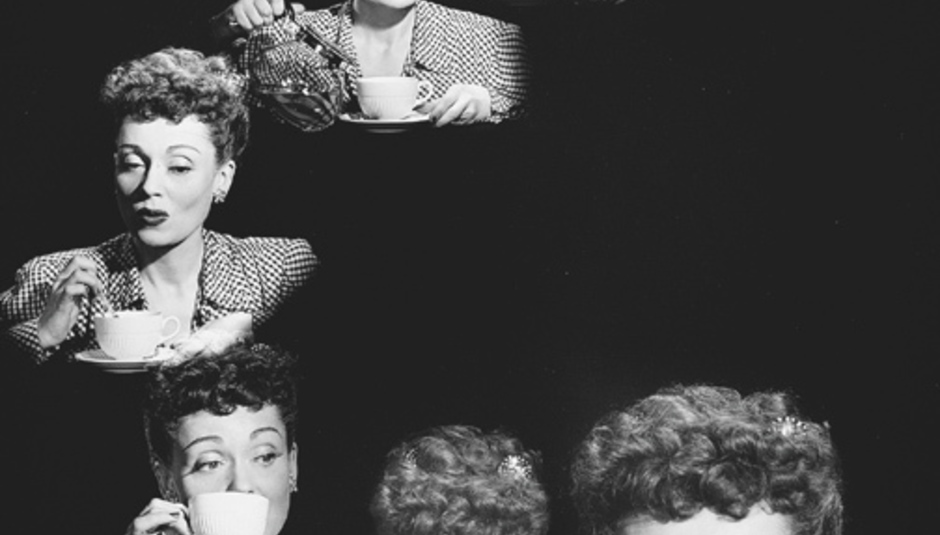 DiS's occasional series of food and drink guides from popular musicians gambols on apace, as Miles Seaton - co-songwriter/bassist/vocalist with ecstatic post everything joy-bringers Akron/Family - serves up his guide to his favourite espressos IN THE WORLD. With musical notes.

Akron/Family are quite an odd bunch, if you weren't aware.

Akron/Family is a band addicted. But, to be fair to the other two (of the three core members), I am usually the one with the jones that leaves me head-ached and willing to skip soundcheck or lobby call (or the beginning of the show if really necessary) for a really killer espresso. I could wax and wane about its meaning or effect all day, but to the list I go... In no particular order these are 10 of my favorite espressos of all time, complete with musical touch tones...

Though there are plenty of haters on this one due to its containing a tricky and controversial bean known as the 'Indian monsoon malabar', I love the way I can feel the tickle in my cheeks and how it's almost too sour. I also love Merzbow, so go figure..

The coffee shop that I still work at (can't get enough, I told you!) just started serving this amazing coffee. I've had a few different single origin espresso from this amazing Northern California roaster, but I've been drinking this one at home for the last week or so, and it's blowing my mind. Sort of like Terry Riley's 'Poppy Nogood and the Phantom Band' that is deeply droning on my record player right now..

The radical economics and emphasis on education are enough to make this company anyone's favorite, but the quality of the Black Cat blend and its rotating cast of perfectly in-season coffees is at the top of this list. Love the light roast and the balanced teeth-tickling this one gives me.. love to drink it in sunglasses at the new Venice Beach shop in Los Angeles. This one reminds me of the Os Mutantes classic « A Divina Comédia ou Ando Meio Desligado.

The light and grapefruity party this tightly pulled shot threw in my mouth was unbelievable, dangerously so. I just wanted to keep on drinking, how could so much sunshine be contained in such a small little cup? Though I’d love to drop some reference to Slaraffenland's We're On Your Side for a Scandinavian tie (yes I know they're from Denmark). I gotta say this is more like the Green Arrow's 4-track recording sessions.

Maybe I'm biased: these people are awesome. and they have had us over to their roasting facility (last time we were in London we went there and had our tea-drinking buddies ready to make the switch)… but this is one of the most delicious things I have ever tasted, espresso or otherwise. Real magic... Anette Moldvaer transplanted from denmark to save England from instant coffee hell!!!!! Gotta say this one is like Albert Ayler's famous Lorrach Paris performance in 1966 : utter glee and hugs all around

Video: Akron/Family: 'Everyone Is Guilty' (live)

Gotta represent Canada! These guys age their coffees after roasting them to achieve the greatest level of flavor and it pays off. The shots I had were pulled a little longer (more total volume) and had a boomy roundness, though not without a sweet and heavy finish. Like 'When The Levee Breaks' (Zeppelin of course!).

Named for my girlfriend (at least in my mind) this one is roasted by the great people at Novo Coffee in Denver, Colorado.

They are a deeply sweet, family owned and operated roaster, and you can taste the love in every shot.. I'm not kidding about that.. you really can! Like all of these coffees though, the preparation is everything.. the Grumpy baristas KILL IT.

This shot is like the 'I Dig A Pony' of shots. groovy, sophisticated, a little sassy.. but still feelin good..

I am not so easily convinced by Italian espresso.. often I find it to be roasted so darkly that I can't distinguish one blend from the next, but I LOVE the culture of coffee in Italy, I always add sugar (something i would NEVER do with any of the coffees above), and I always end up having 10 espresso a day when traveling there.. it's true. I become a parody of my coffee addict self...

St Eustachio is memorable for several reasons, but mostly for their 'secret' espresso style, where they do some weird whipping technique with the sugar just before serving it to you, making a frothy delicious candy-like drink. it's totally niche, and a little cheesy, _but it's DELICIOUS. No joke.. like 'Box Of Rain' by The Dead.. comfort, sunny sweetness.

Though an era may have ended (we've all moved from that three block Brooklyn radius), most of Akron/Family's silly ideas started on the stoop outside this place, or in a goofily crowded booth after a shot too many.. those were the days. And yet the shot I had this afternoon still made me smile.. reminds me of Bonnie Prince Billy's 'Master and Everyone'. Earthy…

This is the mother of all creation as it goes. All the original Akron sessions. All the late nights-turned-mornings tweaking the computerised us into what people heard, with our friend Ed practicing micro-tonality every morning at dawn, Ryan posted on a couple mattresses in the corner, Seth and Dana in the sleep loft and me on the couch...either freezing or boiling depending on the season. The taste and smell of Cafe Bustelo is a gustatory and olfactory "soundtrack" to our soundtrack. Flash-roasted, Cuban style for maximum caffeine content, enough brown sugar to make it sweet, you'll be smiling and giggling and before you know it, you'll think you are peeling yourself off the floor only to find you were on the ceiling all along. This is the sound of Akron/Family at its best…
Thanks for your time, and attention (if you made it to the end)… hope to see some of you at the (espresso) bar!