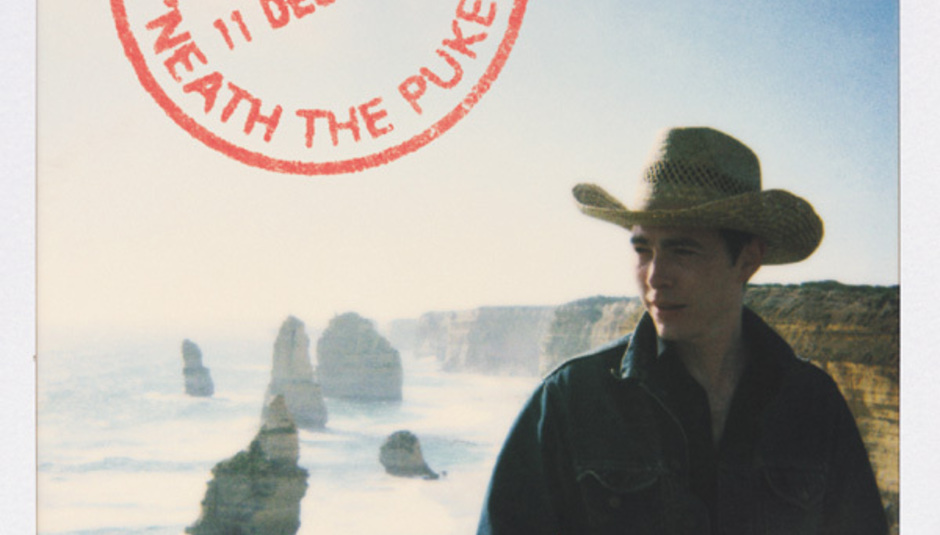 Following on from the profiles of Silver Jews, Palace Brothers, and Magnolia Electric Co., DiS picks four more of the best Alt Country artists, not yet discussed.

The indie Johnny Marr (having toured with Yeah Yeah Yeahs, Billy Corgan’s Zwan, Stereolab, and Tortoise, as well as playing in Jack Black’s band in High Fidelity) Dave Pajo began his career updating Robert Fripp’s axe-heroics in King Crimson, for post-rock pioneers Slint. Strangely, he’s the only Slint-member missing from Palace Brothers’ There Is No One What Will Take Care of You (1993), given that he was studying in the UK. Strange, because he’s cropped up on so many Oldham albums since, with his discreet, unflashy guitar work, managing to be as self-effacing yet inimitable as Michael Rother of Neu and LaDusseldorf. Pajo’s solo debut, as Aerial M, was an early template for minimal post-rock, and he made a classic in the form of Live from a Sharkcage (1999). Perversely, he followed that up with the Papa M Sings EP (2000) on Mogwai’s newly-formed Rock Action label, an EP which took a cue from Palace Brothers’ Days in the Wake (1994). The move wasn’t a complete renunciation, though, as he never stopped mixing up folk-covers of The Misfits, with 13-minute re-interpretations of ‘Turn Turn Turn!’ (rendered more like the Doors or Velvets, as the shimmering music beats down on you like a hot and unforgiving sun). Still his best, and his most Alt Country, Whatever, Mortal (2001) plays some traditional folk and country songs straight, plays other traditional songs almost post-rock (or in the droning fashion of John Fahey, and Loren Connors), and throws out a genuine Alt Country classic in ‘Beloved Woman’. Borne on pounding drums from Slint’s sticksman, and an urgent Pajo-riff, the song’s rider has a final vision of reunion in Heaven, as a triumphant organ rises up, accompanying one of Will Oldham’s best cameo appearances.

See also: Hole of Burning Alms (2004) for a progressively more country-fied collection of instrumentals and cover-songs, where the minimalism of John Fahey or Loren Connors meets post-rock; Pajo (2005) and 1968 (2006) for Country-tinged indie.

Formed around recovering alcoholic Robert Fisher, and his principal songwriting partner Paul Austin, the 8-or-so strong WGC rumbled along like a rusty but deadly Sherman tank when we first heard them. Fisher’s uncannily Nick Cave-like vocals and stark, unironic, God-fearing lyrics might also make you think "what if Nick joined The Dirty 3, rather than Warren Ellis joining the Bad Seeds…" As an ever-expanding and -contracting collective (“anyone who tells you they played on this record probably did”) WGC sound a little Bad Seeds-like, but had their own sound, and links to a host of slowcore and alt. country bands. Plus, those first two records, 3 AM at Fortune Otto’s (1998) and Flying Low (1998) manage to be heavier than any other Alt Country band you might care to name.

With their third, Mojave (1999), Fisher was going from strength to strength as a singer-songwriter – exchanging the songs of penance, and clinging onto the doorframe by his nails as Hell pulls him back… for songs that savoured life after a hard day’s work. Still, it’s a transitional album – a couple of odd instrumentals, and a punk song, show the band itching to broaden their palette, and unsure how. Everything’s Fine (2000) would be a complete departure, capping most songs at 3 or 4 minutes, and aiming at radio-friendly, Bruce Springsteen / Counting Crows-style MOR… hey, a band’s gotta eat, right? The drum-machines date it, but the tunes are strong. The follow-up was a further U-turn – mostly re-working European folksongs, and scattering original compositions among them. Of these, a couple have the melodic simplicity and perfections of hymns that can endure centuries and still move a congregation without any need for “acquired taste” – in fact, ‘The Trials of Harrison Hayes’ uses the same line from The Book of Job (“born into trouble / as the sparks fly upwards / into the sky”) that A Silver Mt Zion used for their contemporaneous album. Since then, WGC have moved between the various modes, but it’s best to start at the beginning and work onwards.

One of the first artists to be pegged as “Lo-Fi”, back when the aesthetic implied something more like a genre, Bill Callahan’s country-stylings emerged a few albums in, on The Doctor Came at Dawn (1996) or Red Apple Falls (1997). Songs like ‘All Your Woman Things’, in which Callahan gathers up his ex-lover’s left-over props and makes a “dolly” for his pleasure, earned him cult-status – it’s still the indie answer to ‘In Every Dream Home a Heartache’. A few years later, ‘Cold Blooded Old Times’ would be a minor indie-hit, with its catchy pulse.

What’s less often mentioned – and maybe this is just male reticence, on the part of fans & critics alike – is the powerful resonance of Callahan’s allegories of loneliness and spiritual desolation. Of all his records, Red Apple Falls sustains the most coherent vision of an imaginary country-town where Edenic dramas are played out interminably, without the Big City’s (illusions of) endless possibilities, and (illusions of) liberation from sexual guilt and repression. You may already know ‘Red Apples’ from (ex-lover) Cat Power’s Covers Record (2000). Something like that mythic sense of the Country-as-Primitive is always implied in Callahan’s country-songs – even the facetious and throwaway (“let’s move to the country / a dog and a monkey / a mule and a flea”) – but never again given its own ‘Morning Paper’, surrounding forests full of ‘Blood Red Bird[s]’ and an ‘Ex-Con’ bagging food at the supermarket.

Like so many albums following a great one with its own concept, Knock Knock (1999) is uneven, but its best songs are career-bests: ‘River Guard’ approaches Springsteen’s ‘The River’ for musical and lyrical perfection, with its story of prisoners taken out swimming, having the time of their lives, and telling the melancholy guard (through their actions) “we are constantly on trial / it’s a way to be free”. ‘Teenage Spaceship’ looks to the heavens for answers with a more wistful, rather than bone-deep, sorrow: “Flying at night / over the houses / I was beautiful… with all my lights / I was a teenage spaceship”. As he so often does, Callahan uses that characteristically Country trick of following a run of almost childish rhymes with an image so clear and unexpected that it shines right through them, while the previous ones express the less literate character’s emotions better than a surfeit of high poetic conceits: “I swore I’d never lay like a log / bark like a dog / I was a teenage… smog”. For sheer visceral impact, Dongs of Sevotion (2000) could be Callahan’s best – often pushing 6 or 7 minutes as drum-machines and electric guitars rattle towards a crescendo – but even without much country-instrumentation, songs like ‘The Hard Road’ manage to convey a romantic notion that the old America never quite went away.

The Great Lost Alt Country band… or a bunch of hapless folk who never outgrew their influences? Arguably, Jason “Whip” Merritt’s band are both, but that’s no reason to disparage them… only lament the A&R’s who figured anyone who would like this would already have enough LPs in a similar vein. (Try singing Sparklehorse’s ‘It’s a Sad and Beautiful World’ over ‘It’s a Sag When You Lift the World’ – the latter is even more sad & beautiful, but it’s too easy to play this game with other songs.) Merritt has a cracked, croaking voice a lot like Molina, and even his agnomen, “Whip” pinpoints the era of Will “Push” Oldham he’s equally hung on. It’s a shame though, because he’s got a gift for knocking out melodies second only to Molina, and a real fluency with metaphor. Mostly banjo-led, with some piano, the songs are layered up with spectral drifts and mists of brass, organ, theremin, singing-saw from the band’s resident multi-instrumentalist (and renowned soundtracker), Max Avery Lichtenstein. Best of the albums, for its atmospherics, is probably Timesbold (2002), but Eye Eye (2005) has even stronger tunes, and Ill Said, Ill Sung (2008) sees Merritt trying his hand at Tom Waits / Danny Elfman-style country-gothic.

The Alt Country Spotify Playlist can be found here