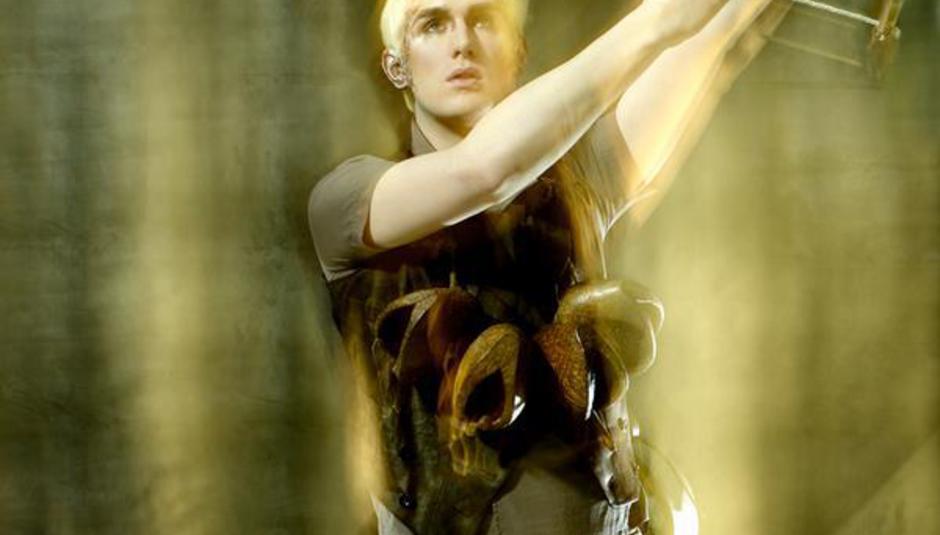 DiS: In a globalized age, with expectations of artists to talk to every media node and to blog, vlog, etc... how much of that expression are you comfortable with? ‘Cause the appeal to most of your fans is that magic of the unknown – that ‘gap of myth’ – where they can’t quite see behind the curtain…

DiS: But I’ve even seen that people use Twitter to actually add myth – an extra barrier or crypticism.

PW: I guess I like to express things a bit more…abstract. I’ve got a bit of an abstract, OCD side to me, where if I have to tell a story, instead of being like, ‘today I was in the studio, and these were the people I worked with…’ I’d rather just do something like Derek Jarman – filming people’s faces and the strings and putting it together. I think that tells more of a story to me than somebody sat there in a tracksuit just talking about themselves. It’s what I do for interviews, so when it comes to my own communication I like to do it in a more exciting way. This whole ‘enigmatic’ thing is a complete accident.

PW: Not at all. When I write the blogs on the MySpace…I left school when I was 16, I’m very dyspraxic, and I can’t write properly, but I’d rather write poetically – write with metaphor, than about buying eggs at Iceland. I don’t want to hear that. I’d rather hear that there are peregrine falcons nesting at the top of the Tate Modern; things that I find interesting. And I’m well aware that every time I write a weblog – which is kind of why I’ve slowed down – I get ripped to pieces by a lot of people for being pretentious, which I’m really not. I’m just being honest about the way I think about things. Even when I describe my music, it’s from the bottom of my heart, and it’s a really dark record for me. And people take all these things and they’re like ‘oh, he’s so pretentious.’

I don’t read Bridget Jones’ Diary, I read Dylan Thomas, Angela Carter, Hans Christian Anderson. So of course, I’m the sum of my influences. I’ve got over here [Patrick points at his wobbly tower of DVDs], sure, I’ve got like – Jane Austen book club and 27 Dresses...

DiS: You’re really worried I was looking at them now.

PW: No I’m not! I think it says a lot about me. We’ve got…Lifesize with whats-her-name, Tyra Banks, the A-Z of tranny movies, but then there’s all my Derek Jarman stuff, all my Sally Potter and French films, all this experimental stuff. I’m a bit like that really. I guess that’s what Patrick Wolf is, you know. On stage I’m in an outfit I find absolutely hilarious, but I’m singing about suicide... and for example, really industrial beats set against me singing about the happiest time in my life.

DiS: Back to The Bachelor then... With this album, you recorded in quite a lot of places...

DiS: And how did the different context, the chaos and disorder of it all, rather than being in one place making music, effect the music?

PW: I think it’s something I’ve grown to really enjoy when making albums – going on an actual physical journey, so the places that you end up going to almost infiltrate the sound of the record. A lot of the stuff was done on a laptop in the back of a touring van during the two American tours. Like, Las Vegas to Seattle is a twelve hours minimum journey, with a stopover. So I was going through the desert and making all these beats there. I was deeply single and thinking that I might be celibate for the rest of my life – I don’t do the whole going out after shows and sleeping with the most desperate fan. I’d rather go home and just lock myself in a room and…

PW: No, you see I’m not a porn person either. I wish I was, I’d probably be a lot less tense on tour! I just keep alive until my next depraved sex session a few months later. I was just on this real bachelor vibe. And I’ve renamed the first album The Bachelor, the second album is The Conqueror, all under the name Battle. The ‘battle’ thing came from recording in Battle itself, in Hastings, and on my little break we were staying at The Cure’s studio and they had a month off when they finished making their album, so everything was still painted purple, with red velvet curtains and stuff. Every book in the library was like, The Night Is Dark and The Devil Knows Darkness and things like that. I was definitely getting into the Gothic thing. So we all stayed out there for a month in the summer.

After that I went to Paris to work…I didn’t want any synthesizers on this album at all really. I wanted everything that was done with a synth to transfer to an acoustic instrument. But all the stuff that I worked with, Thomas Bloch, was all this very early 20th Century electro-acoustic stuff – instruments that fit in with early synthesizers but they’re all made out of glass or crystal. Then I went to Berlin – Paris! Berlin! – so a lot of the songs on the second album are quite cosmopolitan, love songs. Not on the first album. After that Leeds, Castleford, which is like one village along from where Shannon Matthews was bundled into that house. It was interesting. Very different to Paris. It was really rainy, one Chinese open, I went to Iceland all dressed up and people were pushing me around on mobility scooters, like, ‘get the fuck out of my way!’ So that was Castleford. And I really focused while I was up there.

DiS: I think that’s where the Sisters Of Mercy have a church they converted into a studio?

PW: Oh, it was nothing as glamorous as that. It was this new place for mixing – really new equipment. So after that…

DiS: That’s one hell of an adventure to make a record.

PW: Yeah, so far…we did a lot of stuff in Brixton, then another studio up in North London to do the strings in Flood's studio – where PJ Harvey made White Chalk I think. We did the gospel choir in there as well. Then some more stuff in a studio in Highbury & Islington, then a lot here [at his flat] as well – inbetween periods. I met this fantastic engineer halfway through recording. What I needed at the end of all this, where we’d recorded on all these classy microphones – all this stuff from Battle as well – was to transfer it. It was a big deal. I needed the top engineer basically; there was lots of it on Logic, lots on Pro Tools…so I met this guy who had done all the Simon Fuller stuff for the last few years. He had a real pop sheen, and it meant that when all the information was transferred it kept all the quality. It’s been a big journey! But it’s ended up as two albums.

DiS: The odd thing about that is that most records you’d finish, and then go and do a world tour – another journey – when it seems you’ve done quite a lot of travelling already. Which kind of goes back to what you were saying earlier about not having any roots.

PW: You know…I was born in South London, I never leave South London in terms of a permanent home. But we’re planning to move to San Francisco soon, and get out…my thing with this album is: I’m going to try one more time with this English music industry thing, but it’s so much better for me in America.

DiS: It can be so gripey and short-sighted here…

PW: I’m starting to get quite tired of it, really. I think I’m misunderstood by a lot of journalists, by a lot of the English public, and I can’t be bothered with being misunderstood if there are places in the world where you are understood. And San Francisco…every show I’ve done there has been great. It sounds like I’m giving London a bad ‘rap, but I was born here and I started doing shows when I was 13, and for every amazing show there’s always some shitty… For example, I did this DJ thing on Saturday night, just for a bit of cash in order to buy a bed for my new house. And I refused to leave. I DJ-ed for three hours, with all these shitty people in the audience – nice people too, but for every wonderful person there’s a really shitty one, gakked off their face. From Hollyoaks or something like that, and you’re just like, ‘is this it? Is this London? Where I really want to live for the rest of my life?’ And we both got picked up and thrown out into the street, me and William, ‘cause we refused to leave until we got paid. I was like, ‘I’m not spending Saturday night at Hollyoaks: The Bar if I’m not going to get paid.’ But…I’m really lucky – I’ve got a great audience in the UK. But the stuff that goes on around it, the whiners, the moaners. I’ve only ever tried to do something positive, and give something back.

But every time I go to America, and San Francisco, California…I’ve never been on prime-time television here, apart from The Charlotte Church Show, then on my first trip to America it’s immediately Jimmy Kimmel and Conan O’Brien. You look at the Grammys, and has M.I.A. ever been nominated for a Brit Award?

DiS: But then, in the same way someone like Final Fantasy probably plays bigger shows when he comes over to London.

PW: It’s true. It’s a total switch. Also with the Scissor Sisters, and Rufus Wainwright. It’s weird because of the sexuality thing as well. Over here I get much more like – ‘Patrick Wolf: Gay Musician’, in the Daily Star or the NME…and it’s like, when the fuck have I ever talked about gay rights too much to you guys? Why can’t you respect me and talk to me as a producer, and a musician? I mean, if I’m pulled up on gay rights, I will talk about it, and I’ll defend female rights, minorities – equality, freedom for all – I would stand as an advocate for all those things, but it’s not my agenda as a musician. My music is for everybody that wants to listen and…let’s go through like everybody else and say: straight, female, black, Filipino musician. It’s not my agenda.

The Bachelor is released on June 1st. For more info and to hear the album in full visit myspace.com/officialpatrickwolf.

If you missed the previous parts: