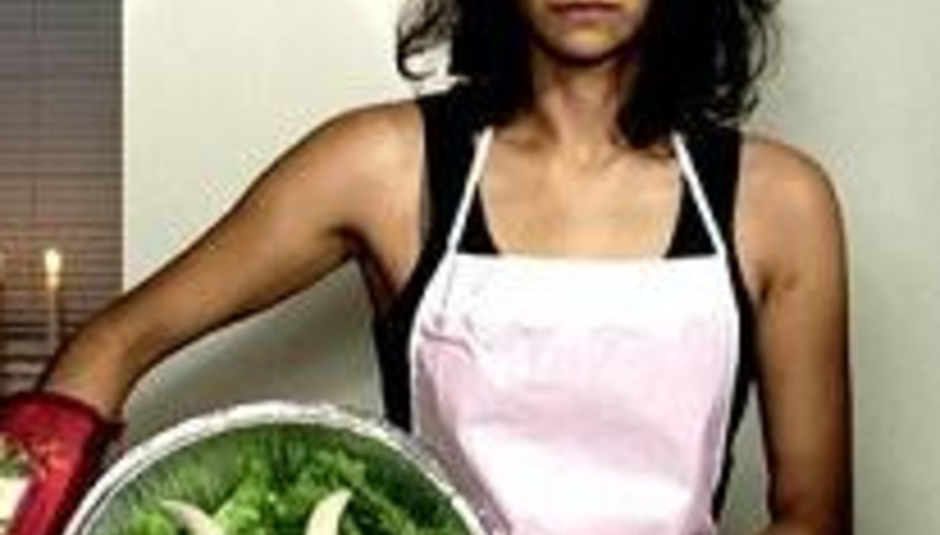 Watching Shilpa Ray live is a difficult experience to describe. Spin calls it the equivalent of your first punch in the face. Time Out New York calls her the 'Best Lead Singer who Doubles as an Air Raid Siren'. I only saw her for ten minutes, four years ago, but I haven't forgotten a second. Maybe that's the best indictment I can give of her talent.

That was at the Sidewalk café, at their weekly open mic that formed the basis of the real Antifolk scene and continued after its dissipation to be a open platform for new acts and regular faces trying out new material. It was fair to say that Shilpa was the highlight of that evening. Coming before or after some aspiring comic who came across as just a bit racist, she hit one key on the her harmonium and instantly rendered the entire room silent. Songs about New York life peppered alternately with youth and cynicism, the instrument lung pulsing as though it was a heartbeat. We still talked about it months after the event.

Now she's back in solo mode, having formed and disbanded her own acclaimed garage-blues act, Beat the Devil. Beat the Devil were awesome, but Shilpa Ray and her Happy Hookers is even more so. There's a ten inch due out soon, but for now you can make do with the music on her myspace page (myspace.com/shilparay), and sporadic youtube footage that shows her in her element, beating the crap out of some song against the body of a giant squeezebox. Emmy: I first saw you four years ago at the Sidewalk Cafe, and it was just you, your songs and harmonium, what's been going on since then?

Shilpa: CRASH!CRASH!BANG! BANG! I HATE YOU! I LOVE YOU! GET OF MY FACE! LAUGH CRY SMOKE SNORT DRINK EAT SWALLOW. ZZZZZZzzzzzzzzz

Why did Beat the Devil end, and why did you decide to be a solo artist with a band, rather than just start another band?

Yeah, I pulled a John Lennon. Got married young, had a kid, realized they were not the wife and kid I wanted, abandoned them only to start a new family a few weeks later and love them a whole lot more. I was pretty naive with the structure of Beat the Devil, it was my first band and I made a lot of mistakes. BTD became more about lifestyle rather than music.

After a while I grew bored of going to practice and playing shows according to a formula that wasn't fun for me. I'm sure my former bandmates on some level felt the same way.

I don't know. If I'm gonna be broke playing music I better be havin' a damn good time. Also, being a solo artist with a band makes the format looser. I can relax and play solo gigs. They can go work on their own projects. My current bandmates are amazing musicians. I'm in constant awe of them.

What is the current lineup and how does it differ from beat the devil? What does each member bring to the music?

Well, we have Andrew Hoepfner of Creaky Boards on keys, Vin Cacchione of Soft Black on Guitar, Jay Braun of Kapow and The Negatones on Guitar, Nick Hundley of Linfinity on bass, Josh Fleischmann of Kapow and Siwat on Drums. Each member is required to bring me space rent, and a new born infant to feed my harmonium. They are also required to tell me that I'm beautiful twice a day. Text messages are acceptable.

When did you first start writing songs on the harmonium, and what was it about the medium that attracted you?

I've played the harmonium since I was 6. My sister and I had to take voice lessons in classical indian music and that was one of the instrument you had to play for accompaniment. I first started writing songs on the harmonium at 22. At first I play it by default, now it's become my sidekick. Most people have these wild expectations as to what a harmonium is supposed to sound like. All it's really supposed to do is create drones so you can layer other sounds against it. Like gesso on a canvas. Not every instrument has to be a lead instrument.

Do you find songwriting a solitary process or do you need to be around people to gather inspiration?

You work in a big department store in Manhattan, which you write rather scathingly (and amusingly) about in your blog. Has this or any other job informed your music in any way?

I've been working in retail since my late teens. I'm now in my late 20's. Being a shopgirl is my trade and a huge part of who I am. It's greatly influenced how I see and deal with people. I remember this girl from Germany coming up to me after a show really confused, and saying, "your music, it so working class." My reaction? Thank God!

There are different opinions on whether working alongside making music is the best way. ON the one hand it can be a constraint on time and energy, on the other hand it frees you from the compromises of working within the music industry. Which opinion is yours?

Time and energy are the most important components that shape what you sound like. I think working alongside making music functions in my favor for now. All that aggression and exhaustion, man it's like a boxing match every practice and show. I mean that in a good way. I'm from the Northeast, I don't know how to relax.

How long have you lived in your city, and why did you move there?

7 years. When I was 13 back in Jersey I used to read books about Andy Warhol and dream about being a Warhol Superstar. Well, we all know how that one turned out.

There's a lot of mythology around being a New York band. What are the realities, and could you be making music anywhere else?

Dude! What is the mythology? I'd love to know from an outsider's perspective. I think a lot of press focuses there attention on the scenester end of New York, which isn't relevant to the music made here at all. From my perspective there's a lot of camaraderie amongst bands here, at least with the bands and artists that I'm friends with. It can be difficult to survive here economically, so we form very tight bonds with each other out of mutual respect. New York is very much a city of friendship, many people probably don't see it that way.

Is recording and releasing music important to the health of a band do you think?

Are you a prolific writer or record maker?

No. I write exactly how I throw up. I feel nauseous for a long time then vomit violently and fast. It takes me a little more than forever to focus my thoughts, but when there focused the physical writing happens in a few minutes. What's your process like? I'm jealous of prolific writers, or people who can write for other people. I've always wanted to try that, but I know how vain I am and the songs would end up being about me. Or maybe people should just sing songs about me written by me as a way to further their careers. Isn't that how Prince did it?

Is music a compulsion for you? And if so, how?

I guess so. I would need tons of therapy if I couldn't do this. I don't know why people have to express themselves but they do. There's a part of me that believes we're just another strain of bacteria that live on a larger organism. Yet We're the kind of bacteria that needs things. High maintenance bacteria. Basic needs should go: Eating, Sleeping, Shitting, Pissing, Expressing Yourself.

Can you see yourself doing this your whole life?

Hopefully, till my voice gets destroyed. Or maybe by then I'd be smart enough to know how to use my destroyed voice effectively.

What are your plans for Shilpa Ray and her happy hookers. What are they in the immediate future and where would you like them to lead?

I want to travel. A lot. There's so much I haven't seen.

Has being a woman in the music industry affected the way you are perceived?

Who cares what the music industry thinks? They're in chronic constipation right now. It's awesome! It's very Mad Max. Let's re-write the rules!

One of the magical things about New York is the population of great female musicians that reside here. Elizabeth Devlin, Sharon Van Etton, She Keeps Bees, Scary Mansion, Ivana XL, Ching Chong Song, and Marnie Stern are some of my faves. Most bands now are co-ed. I'm glad to see that the dinosaur days are changing.

Do you ever feel pigeonholed by that or by the fact that you play a harmonium?

Sure. I want to experiment. I dig organs and bells. I've always wanted a Farfisa. If we got married, would you buy me one?

You seem to have a caustic sense of humour. Does this find its way into sets or into the music?

Who are your heroes? Do you care for the concept of heroes?

People who are 80 yrs old and still fun to be around.

Are there any plans to play over here any time soon?

Hopefully! Why is it so hard to get into your country?

To hear and find out more visit myspace.com/shilparay