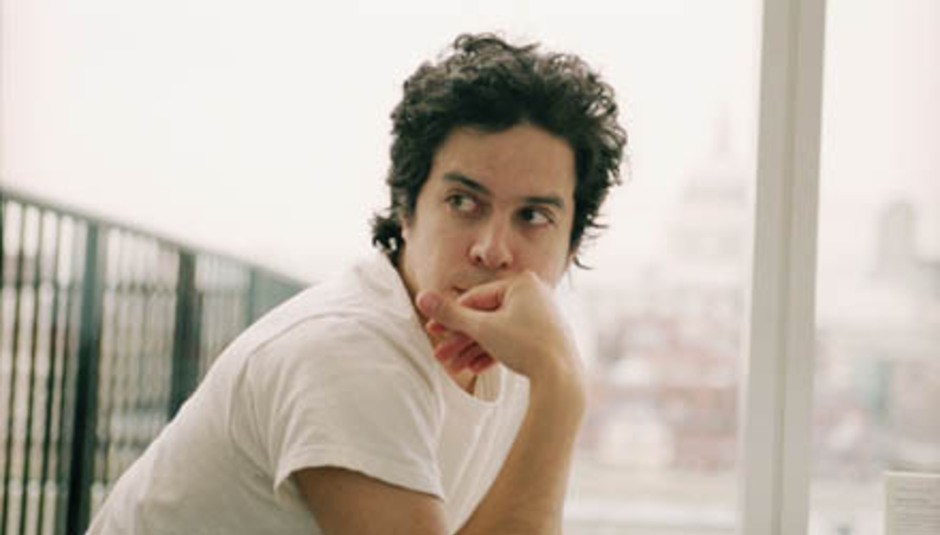 DiS: Before you did your own stuff, you were teaching for a while?

I was, yeah – I was teaching kids how to read.

It was very, very rewarding, you know? You’re changing people’s lives in a way that you can see – it happens right before your eyes. It was a great job.

DiS: And there was the band Rodriguez, as well…

Yeah, we were a three-piece, we wanted to be like Firehose – you know Firehose? – it was short-lived, and it was fun. It was a fun live thing.

DiS: And that was how you met Jason Lytle?

Oh – it has a release date and everything?

DiS: I think April, maybe? I only found out the other day.

DiS: Yeah – it seems like it’s been a while.

Yeah, he moved to Montana, and I think he just had to...recharge, for a little while. It seems like he’s in a good place now: new beginnings.

DiS: How much do you play the guitar, generally?

Everyday. Right now! Yeah – everyday, pretty much, since I was about 15.

DiS: And watching you play live, you seem a very…intuitive player.

I spend a lot of time working on my arrangements and harmonies for productions and it’s just... it’s part of my brain now.

DiS: You played a benefit show recently for Obama?

I did – in Omaha, with Jim and Conor and Mike. It was incredible. That whole experience has just been amazing, and so satisfying – that tomorrow he’s going to be inaugurated, and I’m just so happy.

DiS: It seems like every American I speak to is just completely overjoyed with it. And it’s been pretty exciting for us over here – the rest of the world, I guess – but I still can’t comprehend how it must feel for you.

Yeah – words can’t express, how excited I am. It’s just something that makes you feel happy – to live somewhere where people can make the right decision – and we absolutely made the right decision. And we did it in a resounding chorus of agreement. I mean, it wasn’t a landslide you know – but it was a resounding yes; which made it all the sweeter.

DiS: I remember reading, years ago, that the reason you go by ‘M.’ Ward [instead of Matt] was a move to be seen as more literary?

It was an old nickname I had at school, and it just sort of stuck. I wasn’t trying to be literary or anything, but some people have interpreted it that way, which is fine. But yeah – it’s just a nickname. "M. Ward."

DiS: On that note though, sort of, what sort of authors and writers do you enjoy?

Last good book I read...from beginning to end, was probably...probably a Robert Frost book. Yeah – it was an anthology of Robert Frost poems, who I recommend to everyone. I think Townes Van Zandt said he was his favourite poet.

DiS: Do you have a favourite?

Somebody else I’m discovering is a guy named Wallace Stevens, are you familiar with him? Kind of the T.S. Eliot school. He’s incredible. Those are the two guys I’ve been reading the most over the winter.

DiS: Oh – I forgot to ask, whether there’s going to be a Volume Two for She & Him?

Yeah – probably 2010, we don’t know. Zooey has another film out this year, so we’re both pretty busy with our own projects, but we’ll work together again soon.

DiS: With that whole experience, how was it for you?

It was great. I like the perspective of it being her songs, and I just get to produce and arrange and do the guitars – it’s a great relationship. I love it. She writes a lot of songs, so Volume Two is slowly in the works...

DiS: So there’s that, the folk project…

Yeah – quite a bit of stuff…

DiS: That’s almost it, really – what’s next for you now?

Promotion for this record really, doing interviews all around Europe this week; going to Paris and Brussels tomorrow; Amsterdam, Stockholm, then flying home to do some US press, and then rehearsals in Portland, Oregon – then we’re touring North America and Europe…

DiS: Do you think you’ll be doing any festivals?

This summer? In Europe? I think so. Like – I don’t know yet, which ones, but I have a feeling yes.

DiS: You should do Green Man again!

Maybe I will. What month is that in?

And with that we're done. Well, sort of. Read Parts One & Two of the interview here and here respectively, and look out for the DiS verdict on Hold Time early next week.

Hold Time is released via 4AD on February 16th, and Ward plays a sold-out show at London Borderline on February 25th.