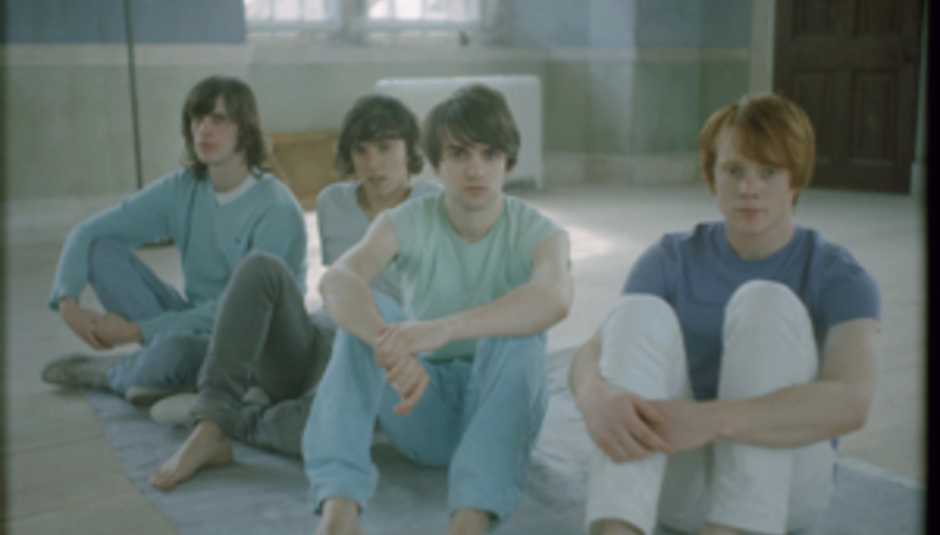 Home-brewed British pop is great again! We've had a few dodgy years of bands peddling sub-Libertines skiffle and anyone from Sheffield getting their blink-and-you-missed-it moment in the media. Then there was the small matter of the post-Klaxons florescent crew stumbling out of Top Shop and into the hearts of the over-enthusiastic youth but the resulting albums were as piss-poor as a PiL bootleg recorded on a Dictaphone in the next room.

You can be forgiven for thinking Late of the Pier and Friendly Fires were just another pair of genre-fried chancers but we've lost ourselves in the magic of their debut albums - which were released in the past few weeks. There's something genuinely uplifting and inspiring about their debut albums, which are not only strong and imaginative collections of songs but they've both managed to hone razor sharp singles fit for the radio, the dance-floor and the Hype Machine chart!

We've caught up with both bands to find out more about their debut albums and they've taken the records apart for you, in a track-by-track fashion. The Friendly Fires piece will be up tomorrow but first we caught up with the band's front fellow, Earl Samuel Dust, to garner some insight into their debut Fantasy Black Channel (appraised/praised by DiS here).

This song started with the Zoom 506 pedal I bought for £10. It was meant to be a Bass pedal but I always used it for guitar. The story behind it is that the first three members of Late of the Pier went camping at the airport, which is a stupid place to camp, with loads of friends and as the sun was rising it got hotter and hotter and we got more obliterated by cheap alcohol. This riff was going round and round in my head as I was walking home in the baking sun, and I plugged the guitar in when I got back and played 7 layers of guitars through the same pedal. This tune always reminds me of a Chinese funeral for some reason, that’s why it had to go at the start of the album.

When we first formed the band Ross could only play 2 or 3 beats, but when I started playing this riff he suddenly made up all these beats I had never heard before. The verses I wrote very late at night, it took a long time to describe how I was feeling in a way that sounded original. Not being able to sleep is a common theme in pop music! The chorus lyrics are about the first time we drove to London and we got incredibly lost, it could be about trying to map read in a place which holds great treasures for you.

'Space And The Woods'

This song is trying to weigh up what is more important; a person or an inanimate object, or an absence of anything. It’s a strange question, but I clearly wanted to get to the bottom of it in these lyrics. They were originally sang over a slow “All Apologies” type of riff, but I completely forgot it the next day and when I was walking down the stairs I made up a new one. This demo was shelved for a year until I was at a house party and everyone was in a room crowding round a stereo listening to it. Then it was in the top 100 of the year mixmag chart with things like “Hustler” by Simian Mobile Disco, and we knew that was crazy. We released it as our first single in 2006, but it always seemed strange, the huge amount of love there was for it.

'The Bears Are Coming'

Back in 2006, probably just before we re-recorded “Space and the Woods” we met Storm Mortimer for the first time. She used to drive the car around London for us, and make sure we woke up to play shows and practice, but she always sang these amazing songs which came out of thin air. I took a whole page of her songs one day and remembering the tune she sang, fitted this deep afro beat rhythm to it. Me and Ross had been talking about making beats that actually sounded like they were coming out of the jungle and they sort of combined with this 80s Herbie Hancock style as well to make the backing for this song. Also Slagsmalsklubben, Prince, The Beatles, Mr Flash, FrYars and Lutricia McNeal were massive influences on this song.

Erol (our producer) loved this song so much, and though we were reluctant to re-record it, we knew he was right. The problem was that we had started playing it like it was a rock record and forgotten that it was much more like a classical piece of music. Once we got the right facial expressions and wore big enough ruffles we could play it properly. The vocal harmonies at the end were added on one of the last days of recording the album, the pressure was high, but the harmonies are very calming like a gentle breeze.

It’s a very up beat song but I think the first line of it came after listening to “The Bony King of Nowhere” by Radiohead, which is about as down beat as you can get. The time signature is always changing and at one point it just started saying “A heartbeat, a flicker, a line” in my head. The big drop into the chorus comes from a really ancient acid 303 track that I made when I was a kid, and I added some Kings of Leon style guitar jangling over the top. The time signature at the end is very difficult because it is one bar of 4/4 then 3 bars of ¾ and that’s just for the bass line! We cut up a guitar solo and put each note on the sampler and that’s why it sounds so messed up at the end of the song. It’s very funny seeing Potter play such a preposterous metal solo on his sampler.

I can’t remember writing this song at all. But we only found out about a month ago that there was a band called Whitesnake and the weird thing is, this song is just like them, plus a bit of Devo, Roxy Music and Dandi Wind. I’ve only just realized that everyone will think it’s a song about the band Whitesnake. Shit.

The oldest song on the album, the first demo of this was recorded in my attic in 2001. Oddly I think it sounds like the newest song on the album because the chords are completely original, they don’t have names. In the studio we got a saxophonist and a trumpet player to play all the horn sections in and they had to invent new scales just to keep up with the song. It was incredibly confusing but what came out was really beautiful. For the album version of VW we decided to drop all the music out so you could hear these horns for a few seconds and its one of those “wake up” moments on the album.

I used to be good at playing the guitar when I was about 17 and I could come up with these Hendrix-esque guitar riffs. One particular bobby dazzler got the name “6/8 Focker” then I made a demo with indecipherable lyrics sang through a guitar amp. When we made Focker “mark II” for the album I took the original riff from before the demo and cut it to pieces using Fruityloops. Then a drum solo I made for it became the drum beat for the whole song. For the last 20 seconds of the song I cut the whole song up again and rearranged it, and now Boyz Noize have done a remix where they cut that up too. I might do an edit of that!

'The Enemy Are The Future'

Sometimes practicing can feel really forced and it feels pointless. One day we were all hung-over and got a few songs in and then just stopped talking to each other. Instead of trying to make things work we all started trying to play across each other so that we couldn’t keep track of anything. Ross was the best at this, despite feeling much worse than the rest of us, he played about 40 different beats one after another all in different timings. Luckily we had the tape player running and we spent the next week or so trying to learn the song and I also made a Chicago House-esque remix. We played the original running into the remix in our live show for a bit, but we didn’t have an ending for it so we would count to 17 and then play Bathroom Gurgle. When we went into the studio we recorded 4 different endings and instead of using one, we spliced 3 of them together and the song was complete! It’s called “The Enemy Are The Future” because we supported them once and they are. It even says so in their promotional leaflet. We liked this sentence so much that we had to make a song out of it.

The simple idea behind this song was that me and Faley would play a few notes each and make a riff, but the bass and guitar wouldn’t play at the same time. The riff is actually based on an old French samba song but nobody can tell, even when I play it to them. The lyrics and chorus came from a one take demo, where we all just played and I shouted lots of short phrases, then I just had to work out what words I might have been saying, that’s really fun, especially with lines like “Falling over aeroplanes and wanting to be a derelict.” We’ve all had that feeling haven’t we?

The first half of this song owes a huge amount to Liars Club, a club night in Nottingham where the best Porno-Noise-Electro-Thrash bands would compete to win over the equally baffling audience. The squelchy grind of the riff was purpose built for that place and in true Liars Club style it took about 2 minutes to make up the first 2 minutes of the song. The next bit is a blur! I had these two themes, which looped round on each other which I sang very exasperated Annie Lennox style vocals over, but I couldn’t find anything to do with them. Yet again the worst idea seemed to work perfectly which was to get to the really frantic sped up bit of the first half of the song and then just hit this brick wall of slow drama which was the other section, without any warning at all.