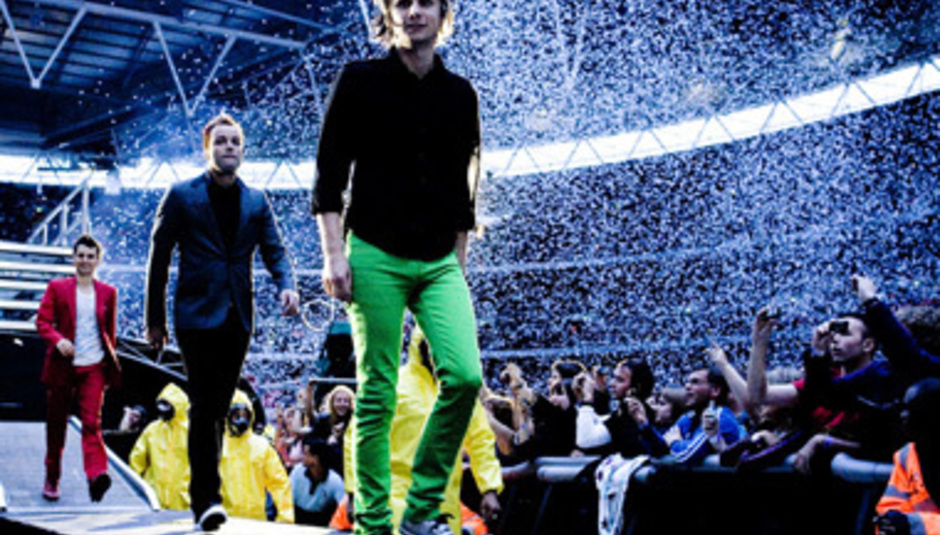 The Weekly DiScussion: Is stadium rock back?

The Weekly DiScussion: Is stadium rock back?

Festivals eh? Remember when they were vaguely exciting? When you chose between the three or so that bookended your summer? Yes, it seems like a long time ago. These days, seemingly anyone can headline a festival. Even Los Campesinos!.

Essentially cheapened and devalued, there’s little kudos in topping a festival, even the bigger ones. How many people are going to wistfully look back at that Razorlight show topping off Reading in 2007? Or the Manic Street Preachers storming Glastonbury in 1999? Won’t happen.

The true test of a band’s size and impact now are stadium gigs; whereas the '90s and the first half of this decade have been dominated by bands topping festivals, it's now more about those bands who see little point in playing to other band’s crowds when they can fill a vast bowl of their own with their own devout followers. Because, if you’re paying £50 for a ticket, then surely you’re a big fan?

That is why, for the last couple of years, alongside the old school of Bon Jovi, The Rolling Stones etc, the new breed of stadium acts have marched forward to offer a new era of grandstanding shows. The benchmark was set last summer with a pair of Muse shows at Wembley, done in their own inimitably flamboyant style, while Arctic Monkeys have quickly moved away from playing other people’s shows to simply creating their own. Radiohead too, aside from an odd diversion into the land of V Festivals, have avoided all UK shindigs aside from Glastonbury (still seen to be in its own orbit around live music world) since 1996. Add to that list Kaiser Chiefs at Leeds’ Elland Road and, most recently, Foo Fighters, and 2008 seems a bigger deal for huge bands offering their own gigs than playing all the Readings and Leeds on offer. Certainly by Dave Grohl’s reaction on the final night of his two-evening Wembley stint, playing one of the most famous stadiums in the world was a much bigger deal than anything that had ever come before.

So why now? Aside from the aforementioned point that it’s almost too easy to find yourself topping a festival so quickly in your career these days, the rebuilding of Wembley seems like a key factor. The buzz around George Michael’s gig there last year being the first was huge and Muse’s show felt like a similarly big deal. The lack of the venue for most of this decade meant that the stadium acts had to play at Twickenham or the even-less illustrious Milton Keynes when they headed down south, and a newly-opened ‘home of legends’ appears to have added fresh excitement to a now long established touring circuit.

The other point, which is perhaps equally valid, is that it sorts out the men from the boys. Who really dares stake their reputation on the line and play the truly vast shows? Especially now that the norm is to perform a pair of shows; one’s now seen as a cop-out and really won’t do. While bands can be a big draw quickly, it seems to fill the likes of Wembley and Old Trafford you have to have some sort of established history and even sold – shock – some records too. Take note, Pigeon Detectives. I mean, Razorlight have been headlining Reading and V festivals for sometime, but do they have the guts to say they can shift 160,000 tickets over two nights in England’s capital? Ditto Kasabian and all those other huge ‘cult’ bands like Rage Against the Machine and Smashing Pumpkins who can take a quick pay-day in Berkshire at the end of August. Oh, and you’ve got to walk it like you can talk it too. If you can’t put on a brilliant, electrifying performance (that £500-per-night soundman isn’t going to help you in these places) then you’re quickly going to be found out. Have you ever been to a Bon Jovi stadium show? I have, and it was inevitably amazing. Same goes for U2, et cetera.

Of course, the daddy of stadium performances is still Springsteen – see the universally-acclaimed run of shows he played last month - but these mammoth venues are one of the few places in music where age and experience come before hype. It will be interesting to see who else attempts to step up to the big leagues in the coming years.

DiScuss: Are stadium shows now better value for money than festivals? Does it make it a better experience? Would you rather see Foo Fighters headlining Reading or doing their own jamboree? Who else might be treading the huge boards in the future?