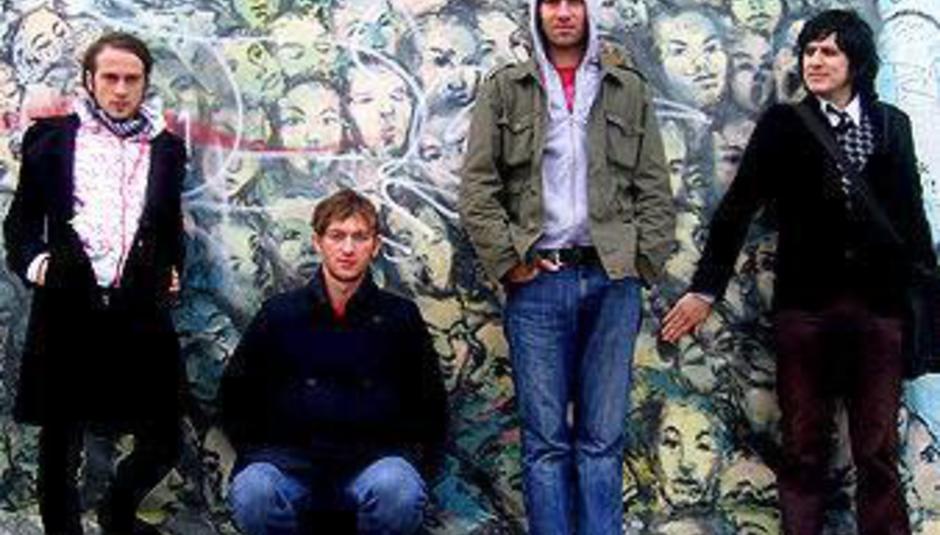 Back in 2005 Leeds four-piece This Et Al were setting tongues wagging and limbs flapping with their experimental rock that evoked comparisons with artists as varied as Queens Of The Stone Age, My Bloody Valentine and Kate Bush; see this review for proof.

When their debut album Baby Machine dropped a year later, to even more rapturous reviews, it seemed they would go on to even greater things, following in the footsteps of fellow townsfolk ¡Forward, Russia! and iLiKETRAiNS. But not a lot followed, until now: This Et Al are back with new EP Figure Eight, released via On The Bone.

DiS caught up with frontman Wu to discuss the past and the present, and how both will hopefully conspire towards his band's success in the future.

It's been a long time since we last heard from This Et Al. Apart from recording your new EP, what else have you been up to?
Since Baby Machine, we went to Germany and got a new bass player (Chris) and before you know it, a year's gone! Other than that, the usual shite really: writing, recording, working, touring. And moving house....

The four tracks on the Figure Eight EP sound more expansive and certainly more effects-based than your previous works. Would you say the band's sound has developed considerably and, if so, what are the main influences or inspirations for this?
I think it’s natural to kick against your first attempt. From a personal perspective my main criticism of Baby Machine was it being a little one-dimensional in places, due to the nature of how it was done and how we wrote it. It was more of a compilation of songs we wrote and toured over a three-year period. This EP is more of a product of what we were listening to at the time and where we’re at; we’re all still relatively young but the band's been together for five years now, so what we want to do has changed a lot. I was in my teens when we started. Recently I’ve been listening more and more to studio-based stuff: El-P, Subtle, The National, Radiohead. Radiohead are the best band at using the studio, and they kinda give you something to point towards, so this time round we tried to avoid just bashing through every song live and left it more open. I bought a Mac about a year ago and have just been recording a lot of demos, not really thinking if it sounds like us or not. I had a lot of demos that were more expansive - more instruments - and we wanted to recreate some of that, but make it sound good, ha ha. 'Medicine Hammer' and 'Ice Age' weren’t finished before we went to the studio; we just booked an extra day so we could finish them there. James’ (Kenosha) studio is in the middle of the East Yorkshire countryside, so it’s easy to feel like there’re no distractions. I think that’s where the more exciting ideas come from, when you’re in a good mood (and drunk) and it’s all focused

Is there a new album in the pipeline and, if so, when are you hoping to release it?
We’re hoping to get the LP out before end of 2008, but we haven’t decided on a title yet. We have four or five songs finished and are working on a group of them now. It’ll work totally different to how we did Baby Machine, a lot quicker and hopefully more concentrated in terms of the time we spend on it. Baby Machine was pretty disjointed. We’ll end up back at James Kenosha’s in Bridlington but he’s doing the Grammatics LP in June, so it’ll be after that. We decided to do the EP in order to get something out a little quicker - an album would’ve taken another six to nine months - and we want more time to write. At times, our Achilles heel as a band has been timing, so instead of planning a date we’re trying to figure out what’s feasible, a way that keeps people who buy the records happy and doesn’t give us a nervous breakdown!

What would you say are the main differences between the newer material and the songs on Baby Machine?
The EP isn’t as overly intense as Baby Machine. I think there’re fewer ideas playing at once to try and give the parts a bit of a space. I love that Echo & The Bunnymen record Ocean Rain. There’s never too much going on, but it’s just as emotive as everyone hammering away all at once. We want that to reflect a bit in our new stuff. We’ve had to learn the art of holding back a little, as it’s so easy to play very very loud and make it sound good!

You've just finished what many people will see as your ‘comeback’ tour. What kind of response did you get at the shows and has it been as rabid as it was when you first arrived on the scene three years back?
We’ve had an ace reaction generally. We’ve only really been playing 'The Loveliest Alarm' and 'Wardens' from Baby Machine so it’s been good to judge people's reactions to the new stuff. It’s been good to get a string of gigs together as well; the last tour we did was in Germany and we never really did a proper tour for the album's ‘official’ release so it’s good to get back to playing little hovels in the arsehole towns of England, ha ha.

Do you see This Et Al more as a live band than one that belongs in the studio, bearing in mind it was your live show that got people interested in the first place?
I think more and more nowadays I’d like to see us as a studio band, but it's probably playing live that gets the most plaudits. I think our music translates to a crowd better live than on record. It's more visceral and it's not as ‘controlled’ as some of our recordings. We’ve got the best line-up we’ve had at the minute and are much more confident than a few years ago, when we could be a bit patchy.

When you first emerged with 'He Shoots Presidents', on a Dance To The Radio split single with ¡Forward, Russia!, were there any expectations as to where it would lead?
I think at the time we just tried to keep our name about as much as we could and hoped for a deal. There was never really any long-term goal when we started; we just played for fun and when we started to play in Leeds it took off a bit. The industry and our awareness of it has changed so much since then and now; we’re not ‘chasing’ a deal or ‘looking’ for success. I think prior to the split we hadn’t been doing things right and when we made friends with the guys at DTTR and made plans with (label founder) Whiskas to do the compilation and singles, it changed our perspective on the whole thing. You’re seriously better off just not giving a shit and just doing what you want to do as a band. At the time, in all honesty, it was pretty difficult as ¡Forward, Russia! were moving forward much quicker than us and I guess it was frustrating, being good friends and then not seeing your friends because they were doing more of what you wanted to do. I’d like to think we’ve done something other than that split single that was of relevance, and hopefully we won’t just be known as that band that did something with ¡Forward, Russia!.

Do you look at the commercial success of ¡Forward, Russia! and The Pigeon Detectives with a touch of envy?
I guess so in a way. We get a lot of questions like this: “Why are you not as popular as your mates?” We’re still lucky in a lot of ways, though: the album was released in most countries, we’ve made it over to Europe a few times, played some big festivals, toured with some ace bands. We get some good opportunities just off the back of us being a shit hot band, as opposed to having a big label or profile or being a new band. But then again, it doesn’t account for shit when you can’t accept as many opportunities as you’d like because of working! I’d trade in plenty of critical acclaim to get the opportunity to stop working and tour all year round.

As Leeds seems to be a never-ending conveyor belt of innovative new talent, are there any other bands you feel we should be checking out?
I still listen to a lot of stuff from round here. I think Grammatics and Dinosaur Pile-Up will be big in 2008 (see them at Saturday’s DiScover Club). Laura Groves is another one who will probably go big this year. Wintermute, Vessels, Pulled Apart By Horses and Paul Marshall are all mint, too. I still think the bands that came out two or three years ago - ¡Forward, Russia!, iLiKETRAiNS, Duels and Napoleon IIIrd - are still making the best music in the area. Outside of Leeds, I recently got into The National big-time, as well as Daughters, Burial and Future Of The Left. All sorts, really.

Finally, what are your plans for the remainder of 2008?
We’ve got an all day event planned in Bradford on Saturday May 31 (see here for line-up details). We’ll be doing a world tour of arenas once our second LP is out, but we’ll be working on the LP from when this tour is done ‘til after summer! Another single or EP hopefully at the end of summer. Some festivals in the summer. Not disappearing for another year without a trace is the general idea!

For more information on This Et Al visit their MySpace.