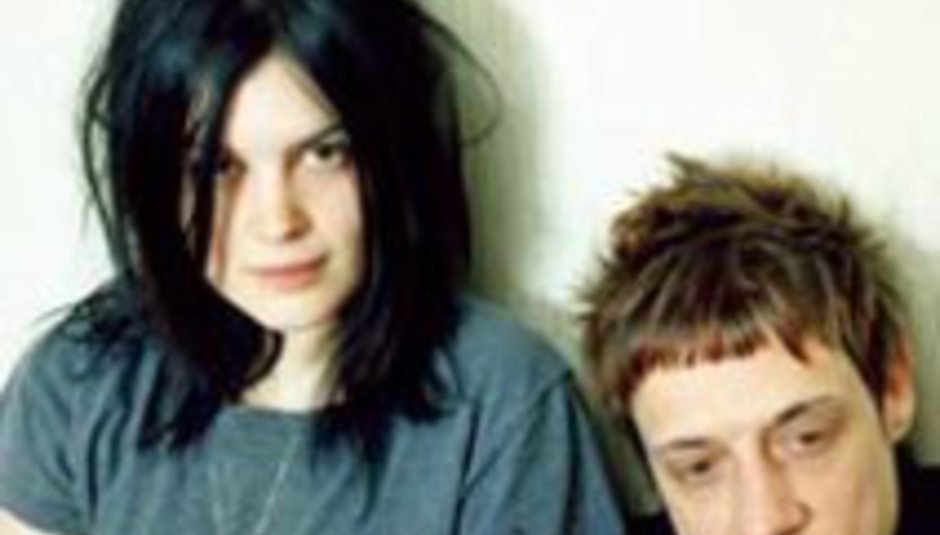 "Everything gravitates towards the blues," says Jamie Hince emphatically. "For me it’s not about crazy songwriting skills or seeing songs as being a craft. It’s about attitude, and that’s what’s always been precious about music."

You don’t exactly doubt the man. London-based art-punk duo The Kills are a difficult act to fault because they’ve so consistently ticked all the right boxes, but dwell too long on the spaces that perforate their records and questions start to arise. Like: the lyrics. The first single to be taken from their new album, ‘U R A Fever’, has Alison ‘VV’ Mosshart singing about some undisclosed subject having “eyes like a casino” and “laughing like a seagull”, which is so wincingly undercooked as to bring tears to your eyes.

Making their name with the scuzzy blues-inspired racket of 2003’s Keep On Your Mean Side after a transatlantic collaboration led to Mosshart upping sticks across the pond from Florida to London, the group picked up a reputation for live shows buzzing with sexual chemistry and carved a respectable niche for themselves in the wake of like-minded acts such as the White Stripes and the Yeah Yeah Yeahs.

Currently the outfit’s third album, Midnight Boom, is inducing the same dirty-sexy paroxysms they’ve always elicited from the music press: that’s problematic, too, because it reflects a tendency in their music to veer dangerously close to modish cliché.

Don’t get me wrong, The Kills most definitely mean it. They’ve made a fine third album that pulses along with the rickety thrum of loosened engine parts. I’m just never sure what _it_ is, exactly. They’re clearly a band who’ve taken the less-is-more aesthetic of rock’s more cerebral practitioners to heart; in thrall to the gutbucket swagger of The Blues Explosion and the nihilism of the early Velvets (it’s surely no coincidence that the guy in the band who famously bonded over a love of Warhol muse Edie Sedgwick wound up dating Kate Moss), but it’s somehow dispiriting to see a band so completely ruled by a set of aesthetic standpoints. Because that’s not communicating, it’s gesticulating.

But anyway, the album: initially pencilled in for recording in LA, the band decamped to Michigan after the city’s laid-back vibe proved too much of a distraction.

Alison: “It’s just so laid-back, slow-moving - it’s difficult to get any kind of spark going over there.”

Jamie: “_ You’d be sitting there with headphones on, waiting five, ten minutes for someone to press record, and eventually you’d walk in the control room and the engineer’d be on the phone talking to someone about gong meditation. It was bullshit, you can’t make a rock ‘n’ roll record surrounded by these kinds of idiots. It was just not really conducive to recording anything exciting._”

The band drafted in Spank Rock producer Armani XXXChange – aka Alex Epton – to help out on production duties after deciding they wanted the album to be The Kills’ ‘first forward-looking record’. It proved to be a fractious relationship.

"I’d lost a lot of confidence producing," says Hince. "_I felt like I didn’t want to be arrogant, like ‘I know everything’ so I wanted someone to come in from an r ‘n’ b production background. I wasn’t interested in rock production.

"People are always surprised when I tell them that but r ‘n’ b producers are the masters of making stripped-down music sound full and amazing and I knew Alex was great at that. But for all the things we’d hoped to use him for, he just wanted to make a rock record.”_

Hince’s attempts to steer him in the opposite direction resulted in a fraught couple of weeks: “I think when we got together we both kind of wanted the opposite things from each other. It was tough, I don’t like working with other people. It brings out the worst in me and I don’t like people seeing that.

"I don’t know, I’m just a cunt when it comes to creating things with other people (laughs). I mean Alex is a lovely guy, he’s got amazing stamina sitting in front of a computer and he’s very tolerant of guys like me. But we fell out. We stopped working for five days, but he came back and all was forgiven." On his decision to essay a more forward-sounding approach than attempted on previous records, Hince is articulate.

"I don’t think if Beefheart or The Velvet Underground were making records now they’d be making them on forty year-old tape machines," he says. "No matter how ugly and stupid the music sounded to them they would embrace technology, and I wanted to do that, I wanted a record that we could look back on as a snapshot of The Kills in 2008.

This is true enough, and Hince holds forth engagingly on the contemporary milieu, reserving a sharp tongue for those acts he perceives to be career-minded and dull. Is it hard, though, for a guitar band these days to remain ‘forward-looking’?

"It’s not hard, but it’s hard to make money out of it. It’s easier to have these guaranteed little recipes, you know like ‘we bridge the gap between The Libertines and Babyshambles’...

There’s a gap that needed bridging.

You’re thinking of The View, perhaps?

"No I don’t mind The View. Anyway they’re not from Scotland are they, I thought they were from Liverpool (not sure if he’s joking now). Some of these bands are great, you know it’s not everyone’s journey to look forward, for a lot of people it’s their thing to get in the music papers and have teenage girls put up posters on their walls (possibly getting confused), that’s a legitimate thing. But we’ve always shied away from that.”

Ask him what stuff he’s been listening to, though – and this is where the ‘4 real’ bit comes in – and he becomes visibly enthused:

"I like Magic Wands, they’re a two-piece from LA, I think they’re married. It’s got a lush, Jesus & Mary Chain vibe... I dunno, These New Puritans, Archie Bronson Outfit, Yo! Majesty...

"There’s things that are exciting but everyone’s just gearing to have a pop hit, aren’t they? I’ll hear something and get excited about it, like The Ting Tings, there’s a couple of songs there that sound really good and then you realise they’re just trying to be a pop band, there’s not really anything else to it and it puts me off. I want something that’s got some fucking voodoo about it, you know?"

The grievances may be a little overripe but at least Hince seems happy to shoot from the heart on a variety of subjects from the smoking ban (“Fucking stupid. When did they ever do anything for the workers’ health?”) to The Killers (“I was like, ‘what are _you gonna kill, a fly?’_”) and Blair (kept the unions down, apparently).

We've drifted off-topic again. How was recording in Michigan?

Jamie: “It was great. There’s just no rules there, it was just a case of ‘bolt the doors shut, let’s go’ and before you know it you’re back on track, starting work at midnight.”

Alison: “The studio's on Main Street, Benton Harbour and no-one lives there anymore since the Detroit riots, it’s a burned-out town. Anyone with any money, businesses, anything of value just fucked off and what’s left is just these broken-down houses with no windows and empty hotels, old theatres that haven’t shown movies in years. There's like a mental institution at one end and a prison on the other."

This is supposed to be a positive, remember. Were the late-night sessions part of the reason for the title, then?

Jamie: “Yeah, it’s just a crazy time, where everyone else is asleep and it’s really secretive, the day isn’t broken up by the postman arriving and then lunch, dinner or whatever, you know we didn’t have any of that. The title actually comes from a Jack Kerouac novel called _The Subterraneans._"

The album also sounds quite militaristic in parts, a motif you explored in the video for the ‘Cheap And Cheerful’ single...

Jamie: “Yeah I really got into that and I’d like to go further with that kind of thing, the marching drums and everything. I saw this drum line band in SoHo in New York, they were fucking amazing, I had tears in my eyes.

"I think people see things one thing at a time so people will judge you on your last record... I sort of don’t care about that really, I’d rather be viewed over seven or eight or however many records we do. Like with Royal Trux, they have this great body of work, I want every record to describe where we were at that point and what we were thinking. Literally, you know, what _were we thinking? (laughs)._"

It’s already been mentioned in forums more appropriate than this, but Midnight Boom is not going to win The Kills new fans by the bucketload. What it does do very well is further the line they’ve always been drawing with an invigorating collection of bone-dry, clenched rockers to stand tall with anything from their back catalogue. Still, though, they should think on: if the wind changes direction, their faces'll stay like that.

Midnight Boom is available now on Domino Records; the band will be on tour in the UK in April.