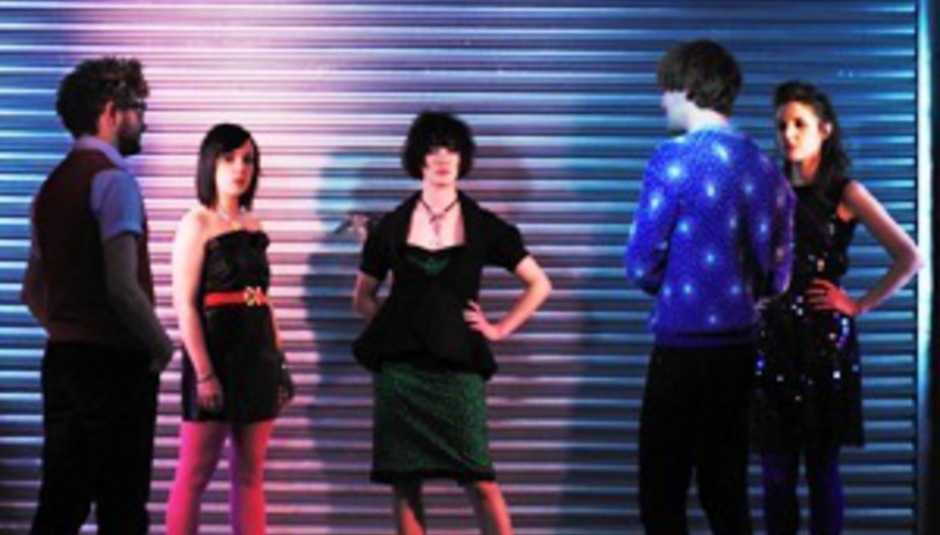 Back in dark and gloomy last December, DiS headed along to a studio in Kentish Town to have an early listen to The Long Blondes' second album “Couples” (quotation marks, necessary), then in the process of being mixed by DJ extraordinaire turning production maestro Mr Erol Alkan. In the candle-lit control room, Erol played tracks from “Couples”, hopping about the place with a mug of tea and gallons of enthusiasm. 'Century' - brooding electronic pop reflected in the re-entry proof glass of some unimaginable chrome space vessel mothballed since the days of disco. 'Round The Hairpin', a complaining wheeze of backwards drone and hiss, a clatter of drum, a sinister whisper and histrionic guitar. There's Stereolab, there's Giorgio Moroder, there's still Sheffield and wry glances and dry humour, but it's clear that The Long Blondes are quietly confident about their second album.

So, how did it all begin?

Dorian: The basic bits of the songs came when we were on tour, as opposed to the first album where it was all written together. Instead of everything being fully formed it was more ideas and then us lot getting together every day and rehearsing. That was a lot more fun, and I think this time it's a lot more indicative of all of us. The problem with the first record is there are a lot of different types of song on there, but they all seem to sound the same. 'New Girl' sounds a lot like 'Giddy Stratospheres’.

Screech: We're just broadening out… either self-consciously or otherwise we wanted to expand on what we've done before.

How have things changed?

Dorian: I don't want to focus too much on the last album but it's very different, the method of writing it. That one was very much go in, do that guitar part. This time it's more about getting a feeling, so a lot of the songs still sound quite raw, which I think is very interesting. So a song like 'Too Clever By Half' is very minimal, but it hasn't been overproduced; it sounds like us playing it live, which I think in part because we're more confident at playing our instruments.

So how did the writing take shape? I think with the first album there were bits of tracks you'd been playing live for ages, and others that just appeared them without really being heard out and about?

Dorian: It was different for every song. Some of them were written quite fully formed, otherwise we had an idea for a verse or a chorus and we put them together. All of the songs on the first albums started with lyrics and then we put the music to them, apart from the ones that Kate wrote, but this time everything's been different, some have started with a drum idea or a little idea like that.

Screech: Some of the songs started off and evolved to be drastically different from how they started.

Reenie: I think when we were writing and practising up in Sheffield we'd have a song that wouldn't quite work, then it would end up completely different, then we'd change it again. What about the working environment? What's Erol Alkan as producer brought to the mix?

Dorian: Having known Erol for a few years helps, because I think he's in the same position as us. He understands us, he played us at Trash when we first started, he's not some big shot who's just being paid to produce us and doesn't care about the music, he wants it to sound good as well, it's not just a pay cheque.

Is that because he's learning too?

Dorian: He doesn’t have that sort of thing of I've done it this way and it worked for the Red Hot Chili Peppers…

Screech: He's as excited as we are about a lot of the songs He's got as involved in putting in ideas as anyone else has. He's brought a lot to the songs in terms of structure and sounds - we were doing stuff like recording drums in toilets, stuff like that.

How has that close involvement helped?

Dorian: I think the thing about Erol is he's got what the classic producers had, like George Martin with The Beatles or Eno and Bowie, it's like an extra member. Something people don't seem to do these days is work with the same producer over a series of albums, and we haven't discussed this yet but I'd like to work with Erol again. I can't think of anyone else right now who I'd want to work with.

So no difficult second album then?

Dorian: That's been the weird thing. A lot of bands I think get rushed into the second record, and I think we've had more time to do this one. Although there's that saying that you're got your whole life to write your first album, and then six months to write the second one, we felt more rushed then, just because of circumstances that we couldn't help. We had to get it out quick because there was all that 'best unsigned band in the country' sort of thing. We thought, let's go in and do it. This time it seems more natural. We concentrated more on the music. It's important to combat how you're perceived, you know, “very wordy, less about musicianship” thing that people always go on about. Well they can't say that now.

The Long Blondes’ “Couples” is released via Rough Trade on April 7, while the single 'Century' comes your way on March 24 (7" and download). More information on MySpace.