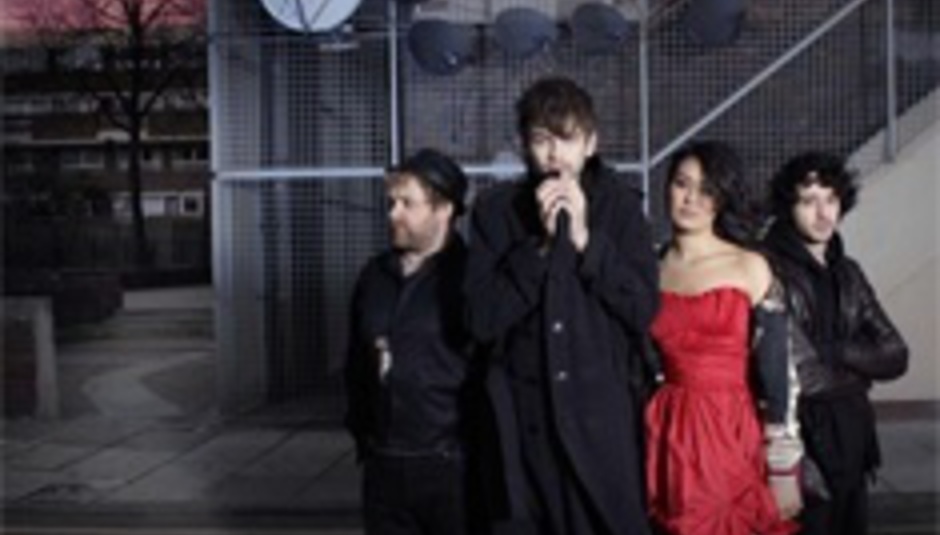 It’s hard to write this line without your fingers dripping in near-apology, but Guillemots are a very, very lovely bunch of people. That is, of course, not a euphemism for crap band – as can often be misconstrued from such person-orientated platitudes. No, Guillemots are also a very good band. The onus on the latter lineage of flattery is due to the fact that DiS has been to the band’s converted mosque, which now acts as their recording home and offices, twice in a week; both times we’re made to feel extremely welcome.

The first time is to observe the band recording versions of tracks from their new album Red, for website publishing. The second time finds DiS and three-quarters of the band (MC Lord Magrao is absent today) sitting round a homely kitchen table as keyboard and percussionist Arista eats her second bowl of porridge and bananas of the day whilst drummer Greig Stewart makes coffee. It’s a winter-warming affair. Band leader Fyfe Dangerfield sits at the table constantly threatening to boil over with infectious enthusiasm, seemingly eager to start talking about the record he began making ten months ago. Luxuriously bequiffed and enviously handsome, he looks rather like David Tennant in those particularly intense moments of Doctor Who.

Nine months is, for most sane-minded people, a long time to make a record, especially given that the last one was a rather unexpected success; almost 200,000 copies of Through The Windowpane have been passed over the counter since it was released eighteen months ago. “We started in April with only two songs”, begins Greig apologetically, having set a particularly large cafetiere of coffee on the table. “And there were also festivals and lots of other stuff in the summer, people moving house, things like that…”

Fyfe steps in: “With our first record, we had three months solid, and if we had a run like that, we’d have done it a lot earlier.” Over the course of the conversation, this is something you come to expect. Without being overbearing or particularly dominating, Fyfe is the one who drives the conversation – leads it, as you suspect, he does the band. Sometime last year, in a chance meeting with Fyfe, he had assured DiS that this second record would be the ‘simple one’. Whatever it is, Red is definitely not simple. Time spent in the studio and its lengthy gestation period have revealed an album which is in turns lavish and thrilling. It takes in everything from Xenomania-esque R ‘n’ B pop to opulent balladry to fuzzily direct pop and most things in between. It’s decidedly different without ever straying into territory that would scare your maiden aunt. It could feasibly sell more records than the last. Which would make them a Very Big Band indeed.

“But, the songs are simpler,” opines Fyfe. “We spent a lot more time on rhythm and beats, and I think that gives them a much better – a different – foundation. We spent ages getting the drums to sound different on different tracks. I really enjoyed it. The last LP was about getting straight onto the harmonies and the strings and the lush dreamscapes, whereas this one we spent ages getting the bass and drums right.” Whereas new single ‘Get Over It’ might be warmly familiar to Radio 1 fans, they will probably be surprised at the identity of the authors of ‘Big Dog’, a slice of R ‘n’ B that’s both salacious and slinky. A chart humper, DiS proffers. “That’s what we want!” laughs Arista, “to hump the charts!”

“‘Big Dog’ is a good example [of the focus on rhythm and beats],” confirms Fyfe. “We wanted to do an R ‘n’ B track. At one point that track sounded liked Timbaland working with Justin Timberlake.” Please note: this is usually the bullshit that bands come out with when they’re desperately trying to convince you they’re hip and relevant and down with the kids, when they’re inevitably a sack of mouldy dad-rock horrors. In this case however, it’s actually true.

There’s no getting away from it, DiS contends; ‘Red’ is a big ol’ pop record. “You can only really try and do what feels right to you,” says Fyfe, leaning in. “On the first album, people’s perception was that we were between two poles anyway - for NME-type people we were too poppy and melodic… but…” But a Radio 2 listener might go, “not sure”, we suggest? “Exactly! We work best when we trust our instincts and do what we feel’s right. We wanted to make a pop record, definitely.”

Your two records show that you’ve probably been more diverse, or perhaps a little braver than your average band? “I think that it’s because we’ve always been really different people in the band – we didn’t grow up together, come from the same countries or like the same music, necessarily,” offers Arista. Blimey. Do you get on at all? “Somehow we make it work and write songs that we wouldn’t make on our own,” she smiles, eyes dancing playfully. “We make music we want to listen to that’s not there,” urges Fyfe. “I always wanna go home and listen to a certain type of music that doesn’t exist,” he says, checking himself for modesty’s sake. “Or it does, but it’s always the same two or three albums.” Starting with ‘Kriss Kross’, already one of the most grandiose and fantastic songs you’ll hear this year, the first four or five tracks of Red are all quite different. DiS suggests this is rather an interesting variant in an indie-rock album. Suddenly Fyfe becomes momentarily exasperated: “I’ve never understood why it’s such a big thing to have variety! I mean, look at Revolver by the Beatles – all the different types of songs. And that was 40 years ago!”

He continues, collecting himself: “It just confounds us a bit, really. We’re going to get it even more on this record. It’s really boring. Well, it’s not really boring, but…” He trails off.

“I don’t wanna hear the same song 12 times,” states Arista, sympathetic to Fyfe’s frustration. Seemingly, the worst thing about doing things differently to others is when those people point and stare.

Generally though, as DiS stated apologetically earlier, Guillemots are the nicest bunch of people you want to interview around a big wooden table. Largely endlessly cheery, they seem unflustered by the expectation around them. “You sold quite a lot of records with Through The Windowpane,” I offer. “I just don’t know – it’s just numbers, really,” says Fyfe thoughtfully. “I suppose that amount of numbers is a lot. It’s beyond a level of indie-dom, but it’s not enough to worry. The main thing is having a record we know we did honestly. That makes me happy. I hope when we’re really old, we can look back and say that we did what we wanted to do at the time.”

So it doesn’t worry you that people around you are expecting the same again – more success?

“We’re not naive, but they’ve (their record company, Polydor) been really good. They’ve not been, like, ‘For fuck’s sake’ - or at least not to our faces.” He smiles wryly. “On the first record we were a bit like, ‘fucking record company’, and just did things our way, and some of the things we were stubborn on we made mistakes with, so we’re actually listening to them more this time round.”

Chat with Fyfe, Arista and Greig is going swimmingly until I suggest that, thematically, Red is a rather romantic record.

“In what way? Where’s the romance? This album’s DEVOID of romance,” challenges Fyfe.

DiS is back tracking somewhat, but still furiously attempting to justify itself. “Romantic things can be about perseverance of a situation, having enough hope or belief in something or someone to get through to the other side…”

“I guess, ” returns Fyfe, looking somewhat uneasy. “There’s a lot of optimism ultimately in there, but a lot of stuff…” He lowers his voice: “There’s a lot of stuff about death, the end of the world and something not being right around us, which is not something we really talk about a hell of a lot [as a band]; we’re not very, y’know… but that seems to be a theme that came out of it. But I understand it being called romantic in a ‘we’ll get through this’ way.” He looks utterly unconvinced.

'Emotional' is better than 'romantic', then?

With that, we’re off. Back onto the streets of Bethnal Green with a strange sense of wellbeing crossed with a slight hint of foreboding. Lovely band, Guillemots. But be wary of touching their dark side.

Red is released via Polydor on March 24. A single, ‘Get Over It’, precedes the album’s release. For further information visit the band’s MySpace site, here; a free download of ‘Kriss Kross’ can be yours by clicking your way there, too.