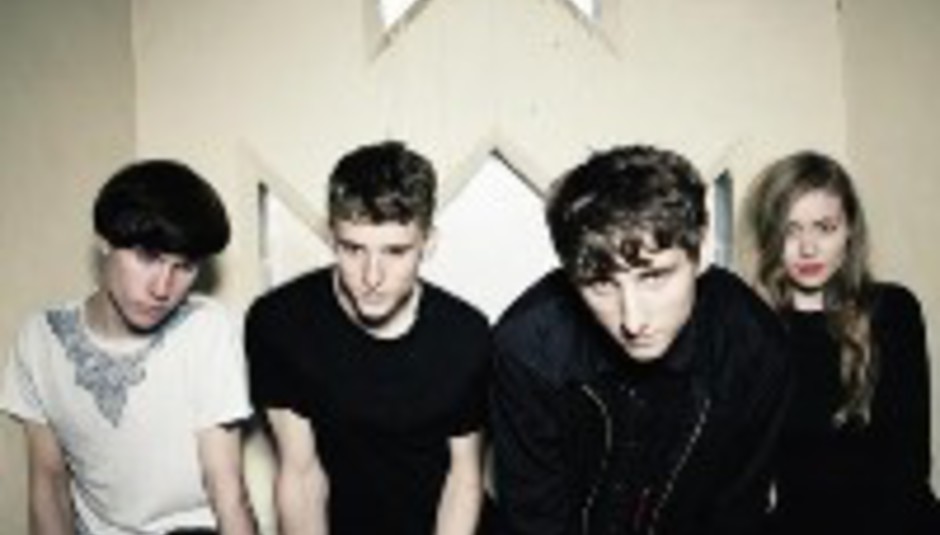 I’ve wanted to interview Jack Barnett over a game of chess for while. Numbers, colours and angles would say more about his band than any number of runs through regurgitated influences and tours and new albums. I wanted a photo of him over the board, darkened and hooded like the GZA, and phrase phases opening,_ middle and endgame_. Leave the game in a perpetual stalemate and perfect symmetry.

But Jack can’t play chess; it’s_ “just a weird game”_, and maybe black and white are harsh tones for These New Puritans. You’d need a crystal ball; it’s hard enough keeping your head out of time with mirrors and smoke woven into estuary English. Especially over buzzing ‘50s Christmas rock ‘n’ roll in a kitsch Shoreditch diner, running throughout the tape like a ghost of music past.

Whilst twelve months ago These New Puritans were typecast as ‘new-rave’, now they’re merely ‘new’. Beat Pyramid is a strikingly original album for what is essentially, although begrudgingly, a guitar band. Previous tracks now run free in their natural environment, with each idea pluvial, streaming in and out of songs, running concurrent with the album itself. Due to looped opening and closing tracks, when set on repeat it will run seamlessly forevermore. It shouldn’t be released to a fanfare but to the sound of indie-kids’ heads expanding.

But that’s my sentiment, not Jack’s, and there’s only so much that can be said about oscillating eardrums. After, he said the interview should be about his “media manipulation”, but it’s more a deconstruction of the entire process. It might read otherwise on dulled office eyes, but there’s as much ego to him as there is meat on bone, nothing but a unique perception of the inherent contradictions and failings of the entire ‘music’ enterprise itself…

It’s been alright. I don’t like to dwell on things.

Okay. Well, the album was originally scheduled for a November release, but has been held back until late January. What did you think about that?

I was verging in on suicidal. Well, that’s an exaggeration. I have to control everything about the band, I think it’s really important; I want to move on as quickly as possible from everything, every couple of days. The album being delayed kinda deconstructed that though. I did get to record the ‘Elvis’ EP and_ ‘FFF’_, so it worked out positively in the end. Maybe no one would have bought it in November; it’s got more chance of sweeping the globe in January.

And you’ve changed a lot over that period, as the new EP (recorded after the album) is testament to…

Hmm. I’m embarrassed about being in a band, so it’s hard for me to answer musiciany questions. I mean…. we change every second. We’re always trying to re-answer the question, “what are These New Puritans?”_. Every moment, every second, every day we ask it and answer it in a different way. We want to be everything.

Well, the common (mis)conception of TNPs is that you’re either a kinda high-end arty London scene band, or a new-rave band. You do seem to have been lumped in with both to some extent; the Vice tour and festival, the Dior Homme collaboration, playing at Fabric, the Digital Penetration compilation…

We mean all things to all people. It’s all good. We’re always in flight from ourselves. People can try and pin us down, but the band is always different from ourselves, not least what other people think. I don’t really care at all. I want to do all things. Lots of our songs do different things. ‘Elvis’ is a pop song, and we’re releasing it because we can be a pop group. It’s just funny; we’re not new-rave. There are many things that could offend me more…

How about the ‘Southend scene’ that seems to have been created around you and The Horrors, Ipso Facto et cetera…?

What I’ve invented for us is the Thames Estuary tradition, starting with (JMW) Turner and Daniel Defoe, and running to Dr Feelgood and then us. That’s where I imagine we fit in. It’s a really great place. It used to be overrun by malaria and the average man used to have 20 wives, they just had to import more and more women. This was only a hundred years ago and that’s true. It’s a murky place, and it’s an easy place to map into a feeling to make murky music. I always say in London everything’s been done; in Southend nothing’s been done. But I think all those bands are too scientific in what they do; they get caught up in the science of music. Our album is magic music; we bridge the gap. It bridges the scientific with the magic.

What kind of magic?

I mean real magic. It’s all rituals. When we made the album the idea behind it was to make a ‘Beat Pyramid’- it’s us inscribing the pyramid into the air, literally cutting in the airwaves...

“I’m writing in the airwaves”…

Exactly! In a thousand years there are codes that won’t be deciphered in our music. It’s always hard with interviews. Every word I’ve just said is a lie. It’s impossible to answer. Everything I’m saying is code, and it’s filtered through all the questions and interviews I’ve been asked before, and I feel I can never really communicate what we are. I mean it’s not just about music; there’s something above us we can’t grasp. That’s what makes us These New Puritans.

I’ve always thought that because a few kids are having lots of fun I could never possibly imagine ‘new-raving’ somewhere, and that I’m justified in listening to darker stuff like you, or Burial, or Gang Gang Dance…

I feel an affinity with Burial. We’re weird kindred spirits or something… There are quite a lot of similarities. Did you know we existed on the internet before we existed in reality? We put pictures up and then music and only played gigs a few months later because people liked it. I think people think that it’s a contrived thing- that we’re trying to act intelligent. But it’s an accident, we’re just pop music. It’s not that elaborate is it? It’s just strums…

You seem to make out there’s more to the band sometimes, and less others…? Maybe because you consider TNP and yourself completely separate?

I do a lot of music under a lot of pseudonyms. But I’m not ashamed of TNPs, it’s just my job is to direct. It’s like making a film – the others are the actors and so I’ll make sure the bigger picture has other strands that weave together to make the band, and they’ll carry out their tasks.

Tell us about the album then. I like how streams of ideas weave throughout; parts from older songs resurface as new… and the looping, circular structure…**

There are lots of ideas, I could go on. The reason why we called it that is that we wanted to construct a pyramid with its secrets and geometry. There are themes running throughout; mirroring, cycles, silver. I think it’s important there’s an overriding theme to it, because songs like ‘Doppelganger’ and_ ‘Elvis’_ don’t fit together at all. When I was doing it I was thinking of electronic sounds, literally electronic waves. It’s probably too pop for an intellectual audience and too intellectual for a pop audience. Not intellectual… maybe just self indulgent.

*Perhaps the most striking and original aspect is how rhythm heavy it is... there’s a real bond between the melody and rhythm. This sounds stupid, but do you think there’s a genetic connection between you and George (Barnett, drums)? And how do you write the songs when they’re so unconventional… *

Yeah, genetics… Me and George have been playing since we were really young. We’ve had lots of imagined bands; TNPs are the first one which has become real. So it probably helps. Like the film metaphor, I’m the all-seeing eye and have to make sure the whole thing comes together and the others take care of the minutiae. I lot of the time I’ll write them on the computer and say, “interpret that in a TNP way”_ or “play like hip-hip”. I don’t care about the riff or anything; it’s not that musical. We’re a band of drummers really.

I’m starting to draw everything together. The next thing is going to be Steve Reich meets dancehall. Do you know Vybz Kartel? It’ll be ensemble stuff like that. My eventual aim is to do nothing on stage – just sit there and let everyone else do everything. I mean… the best bit about being in a band is writing album credits. I’m basically in a band so I can write credits…

Earlier, at the junction of Kingsland Road and Old Street, I had nearly killed us both by choosing to run the road on a red light. Jack said something. It didn’t really make much sense then, but perhaps it does now. Aptly, it leaves us in circularity. For circularity, read inevitability; for inevitability, read circularity…

“You should begin the article,” said Jack, “with my death.”

These New Puritans’ debut album, Beat Pyramid, is released via Angular on January 28. MySpace here. The band is on tour with British Sea Power in January, before playing the following shows:

These New Puritans then go to Texas for South By Southwest. They might get tans! Nah…