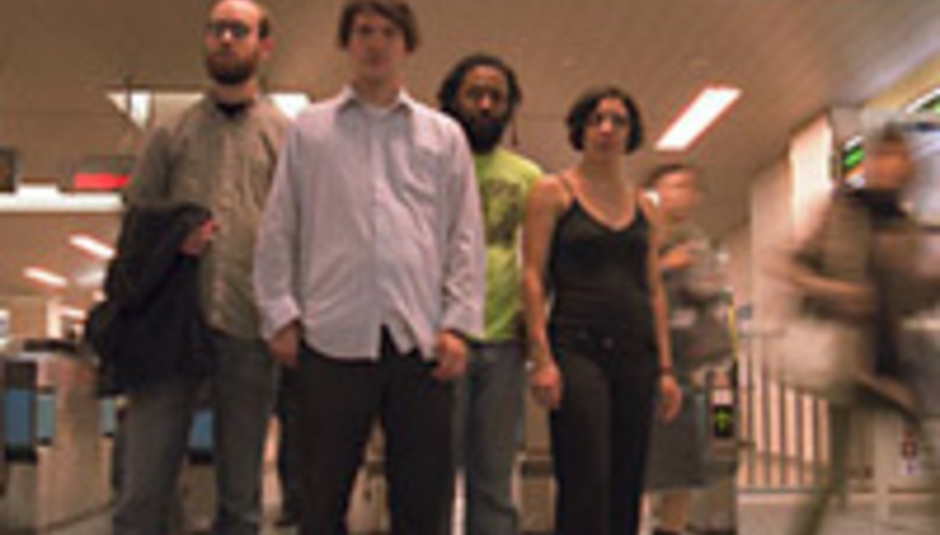 "We need to always f**k it up": DiS meets The Good Life's Tim Kasher

"We need to always f**k it up": DiS meets The Good Life's Tim Kasher

September saw The Good Life release a piss-soaked bar-dream of an album called Help Wanted Nights, to which a screenplay has also been attached. Though linear overarching narratives have been used in the past by the band, this release marks something of an expansion in awareness and scope. Before all that dramatic bollocks and shrieking though, DiS spoke to Kasher about those narratives, about pop, about his Nebraska roots and the whole Saddle Creek explosion, about sadness and about washing the dishes.

Could you explain the concept behind your latest record, Help Wanted Nights?
There's not a lot of concept to it compared to what I usually do with records. There's a theme. Every song is men and women, but not specifically. Different facets of relationships. And then it's also kind of loosely thematic and set around a bar. It's not really new territory for The Good Life, but the screenplay that is a part of it is… that’s where that dwells. If it weren’t for this screenplay then I probably would have written it in a different direction. But I love the record, so that doesn't really bother me.

You're probably sick of people asking, but are there any plans as of yet for the screenplay?
Yeah, there's a financing team I work with and a casting team I work with. Weekly they send things out and we get responses… we just haven't got anything sealed yet. I guess the people I work with now want to do it proper, but I'm waiting 'til all of that doesn’t work, and then I just wanna go out and make it… renegade style.

Would you say that Help Wanted Nights is a little brighter in tone than previous albums?
I think so, I don't think it's as personalised around an actual… I think it's not as conceptual. Besides, a song like 'So Let Go', I think it's still kind of dark.

The reason I ask is that the last song, 'Rest Your Head', ends pretty triumphantly. The final refrain is "it feels like love" - did you want it to end on a high?
Yeah. Album Of The Year doesn't really end on a high, Black Out certainly doesn't! But the Cursive records I do try to end on something really positive. Some kind of a hope. I guess it kind of happens naturally, because I am an optimistic person who deals with a lot of darker material. But now that I talk about it, and it seems to be only in interviews (laughs), that my eyes are opened to how bleak The Good Life tends to be. I guess this record is a different kind of Good Life!

I was very pleased to hear it! With that song, do you feel that the line between standard pop songs and something a little more epic is being blurred? (It's over ten minutes long.)
You have the core and the origins of the songs, and they just are the lengths that they are. I'm really against applying verses and taking verses out just to get into the appropriate range. I work so far outside of radio anyway, not that I wouldn't want to be on radio… that being said, we still do a single every time we put a record out. The commentary is very slight, but I do like that our single ('Heartbroke') is too short and then the album as a whole is too short, but one song is ten minutes long. It's a good way to keep applying that there shouldn't be these standards for music.

Instrumentally, your sounds tend to veer from complete tonality to something much more violent and visceral. The guitar on 'Just A Little Bit More' is fairly tonal, but then the solo on 'Some Tragedy' is pretty horrific. Is that something intentional that mirrors what you say in the songs?
Yeah, uh… I think that's the kind of way I like to write and the way the people I work with write. A lot of what you're talking about is what Ryan Fox (guitarist) does. I guess on 'Some Tragedy' we go off on our guitars together, but uh… I appreciate that we have the same like-minded… like, you want to teeter. It's pop music. Since we were young we hated that word ‘pop’; we thought it was really derogatory, and we were listening to Fugazi. And Fugazi was not pop music, but it actually is. Fugazi is pop music. We want to write music that we want to listen to. What we keep with us is that need to always fuck it up. Destroy it a little bit or abuse it. I really like that last Cold War Kids record, did you listen to that?

Didn't they have that big single with the song with the big bass line? [Performs perfect (read: shit) mouth-mime.]
Probably, they have some pretty big stuff! I really appreciate their record for how boisterous I think they are. They write catchy stuff, but they always kind of fuck it up. It's good to be confident, I guess.

Because of the concept-led nature of The Good Life's records, do you feel like you restrict yourself from writing different songs?
Yeah, I think about that often. I think that the song 'Heartbroke' is such an unabashed pop song. The whole process of that song was that I was in the back room of a Cursive tour, and it was something to pass the time, almost. I never really thought much of it, but then I thought, "Why not pursue something like that? It's only a practise anyway…". My point is that I don't really think it fits on the record (laughs), but then there's a conflict. We felt like it was one of the best songs we had in the band, so how can you not put on the record? Because it's not appropriate to the whole overarching sound. So we put it in for the reasons you're talking about, which is to be careful you don't restrict yourself too much, I guess.

Do you find it as rewarding to sing about positive things as negative things?
(Long pause) … Y'know, even the most positive stuff that I listen to can have that subtle undertone of deep sadness while rejoicing. I think John Lennon is someone who was so great at that.

I was very surprised to read that Cursive did a tour with Mastodon. How the hell did that happen?
(Suddenly smiling) It was great! We were so bewildered by it initially, as to why we were being asked to do it. We've turned down a lot of tours in as far as what we think is not appropriate, and as far as the way represent ourselves. But with Mastodon, we have so much respect for their approach to music even though it's nothing to do with the way we make music. The tour went so well. I spent the first two weeks being like, "This is it, this is the night when someone's gonna throw something at my head and we're gonna get booed off stage". But it never happened.

Here's another question you'll be sick of. What do you think has become of the whole Saddle Creek/Omaha scene? Where is it now?
I surely think it's in Toronto and Montreal. Don't you think? That's what I think. Arcade Fire and all of their friends, Broken Social Scene. They're on fire. Why, what's the next city going to be?

I think we'll have to let that one sort itself out. Finishing on a slightly selfish note, my favourite song on your last record is 'You Don't Feel Like Home To Me'. Could you tell me a little about the inspiration for that song?
Well that song is something I started applying to another screenplay, but then I kin of switched it over because I was working on Help Wanted Nights. It's actually one of the oldest songs on the record. They're just things I was writing in a fairly… dark place.

It seems to me that a lot of fragmented emotions get blown up in that song, like when you describe cracks in the patio and sweat-stained sheets…
For me, it's the ongoing practice of trying to reach that. It's fully the type of writing I believe in. From majoring in English at college, y'know, that’s what I learned. Always, the most beautiful songwriters… that's what I appreciate the most. The way the smallest details can mean the most. Thank you for seeing it in that song.

Well that's us done, I'd say.
Good timing, I have to put some things on stage…

The Good Life’s Help Wanted Nights is out now via Saddle Creek. The band’s MySpace page – songs, info, dates – can be found here.