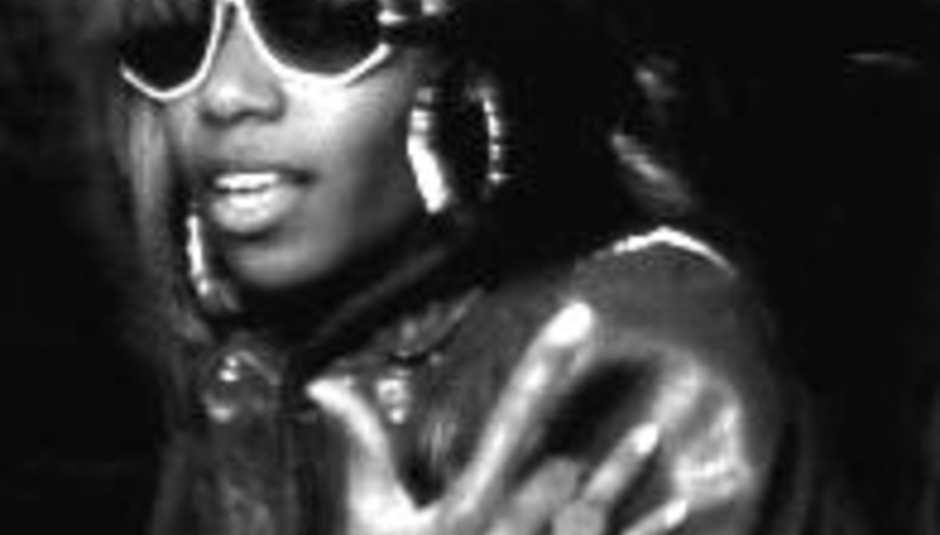 What’s that old phrase about assumption? Something about ass? Ass? When Santogold arrived, seemingly from nowhere, with the perfectly formed split single ‘Creator’/‘L.E.S. Artistes’ the assumptions were much and - or as, perhaps - knowledge was limited. A fire-breathing, double-edged sword of a split, the first we’d heard of her pitched Santi White – A - as a depoliticised, shrieking MIA and – B - as one of Sting’s downbeaten, sullen lovechilder. We hear they could take Guernsey. ‘Hear’.

Anyway, give her context and Santogold starts to find image quickly: she’s not a distanced imitator of Mathangi Arulpragasam but a mate who shares producers. She doesn’t rage like ‘Creator’ rages; most of all she pops like the B does and the album, released next spring, will be conclusive proof. And, critically, she was never part of a ska-punk troupe - “everyone keeps saying that, but it was more like a post-punk, new wave band”. All fears assuaged, rub out those black marks.

Do you have time to speak?

What are you up to at the moment?

Yeah, he’s good he’s on his way back from Brazil and he’s sending me all these songs.

Are you working with him then, on the songs?

How well do you know him then?

Not for too long – I don’t know, I’ve known him maybe a year and half, two years.

Are you from New York originally?

I’m from Philadelphia, but yeah I’ve lived in Brooklyn now on and off for years.

How is it round there? There seems to be a lot of good coming out of Brooklyn at the moment?

Um, I like it, it’s like… um… I don’t know, you know how like you kinda gravitate to areas that have a kinda energy that you need at that time?

Sometimes NY can be too much, y’know, but at the moment it’s perfect. There’s just a certain hardness to it that’s inspiring and yet all the people I know are in New York enough that you get the warmth and the comfort zone you need even while there’s all this other shit going on.

I suppose you’d need that in a place like New York, that comfort.

Is there anywhere it centres around… is it a ‘scene’ as such, or is it just a group of friends all living in the same area…

Um, well the scene that I’m mostly associated with, most of them live in Philly, but they’re up here all the time – y’know Spank Rock and Diplo and Amanda Blank and MIA lives right round the corner from me but she’s never here.

She’s gone AWOL at the moment hasn’t she?

Oh right. We heard a couple of weeks ago that she’d gone AWOL.

No, I just talked to her last night, she was in the tour bus down south, in Dallas or something. I’m not sure where, but she’s not AWOL.

Good… do you know her well, MIA? There have been a lot of comparisons straight away to MIA from the single – do you think that’s valid or is it just a result of working with Switch?

I know her, she’s my friend and I like her a lot. I think it’s mostly working with Switch and especially from the track ‘Creator’. I really don’t think any of my other songs would get that comparison at all, but if that’s one of the songs people have heard on MySpace… It’s not just Switch, it’s Switch and Diplo and Radioclit so people are, like, “Oh MIA”. But some people think I’m a rapper, so it’s just totally wrong. But I’m not even worried about it ‘cause by the time the record comes out it won’t even be an issue.

So if you’re not a rapper what shall we call you? If you listen to ‘L.E.S. Artistes’ it seems a lot more pop-y than the MIA record…

Yeah, I mean, like, I’m a singer and I write pop songs. I like interesting music but since I was a kid I’ve been drawn to music that you can sing along to. I think that all the cool and really interesting club stuff that’s going on right now is amazing so I try to incorporate it a little bit but I don’t think… the type of music that I’ve been listening to for 15 years straight is another type of music, y’know, and I want to make music that you want to listen to for a long time, not just when it’s trendy or whatever…

Yeah, but I wanna write pop songs that are good – since the invention of bands like Backstreet Boys pop music just took on a whole different strain. But back in the ‘80s pop was stuff like Prince and the Police and all these other amazing people…

Yeah, so that’s what I wanna do. When I say pop music I mean to write songs that you can sing along to and that hopefully have a lasting impact.

I’m not sure how far I’d go with the concept of innate inclination towards something as man-made as pop, but Santogold’s ears seem more natural than any other of those peers she mentioned – M.I.A., Amanda Blank, Spank Rock – when it comes to writing a famous tune. I ask her how the debut record – out through Atlantic/Downtown in February, no less - came about: “I was like, ‘I want to do some solo shit’ and John said ‘let’s just write shit’ so we started writing a bunch of new shit. Since then it’s just turned into what it is.” Natural with her shit, natural with her spiel, she still seems uncomfortable with the worked premise of performance.

Still, it’s worth keeping an eye on that natural growth – Santogold returns to London to play the Hoxton Bar and Kitchen on the 6th of December.

From here on in the conversation wanders into mindless rumination on pomegranates, the gym and whether or not she could kick the ass of the entire DiS office for me – it’s not for boring you with. Have MySpace, instead.