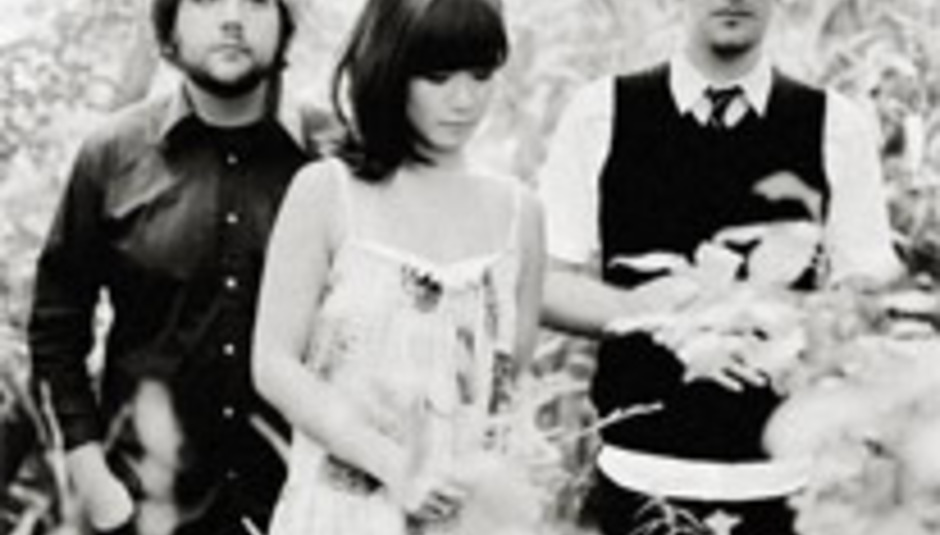 "Are we depressing?" Asobi Seksu dispel the myths

"Are we depressing?" Asobi Seksu dispel the myths

Managing quite happily to record one of the year’s best (and most misunderstood) LPs in the wonderful Citrus, to be an extremely fine live act and then to take all that on the road for several months, New York pop (very, very pop) group Asobi Seksu are making people remember something.

Sadly, they also make people remember a genre with which they actually have very little in common – shoegaze. To call that backward-facing tag a millstone around their necks might be little over-reactionary, but there's a definite resentment for it when DiS meets with guitarist/vocalist James Hanna and keyboardist/vocalist Yuki Chikudate below the Kilburn Luminaire as they readied themselves for the first British date of their ludicrously long tour. Later on, they will play gorgeous, noisy pop songs with words in English and Japanese, but for now we talk fields of strawberries, psychedelia, twee and that genre…

How was Paris last night?
James Hanna: Paris was cool, it was more like a club show. They didn't hate us.

Is this tour a long way removed from previous, more stressful tours [taking in arguments and break-ups and fevers and hella loads more]?
JH: Yeah, we had to do everything ourselves… Having a good tour manager helps. And television. DVDs.
Yuki Chikudate: I bought a book light for this tour, I was so excited! I've got so much to read, I haven't even used it yet.

How's the reception been for Citrus compared to the first LP?
JH: [Laughs] Totally different, they're not comparable at all. There was no or very little reception for the first one.
YC: Before Citrus? Oh my… [Laughs as well]
JH: We're ready to make a new one, for sure. As soon as we get back. We've been working on stuff, we probably have a couple of months of work, but I'm excited. It's gonna be a little different, we'll figure it out when we get there.

To me, you have two dynamic areas. There's your pure, pure pop and there's your more exploratory, almost impressionistic side. Do you see a balance between the two sides?
JH: It's funny… I'm actually thinking about this. I think it starts, usually, from a pop element. It never starts with me picking up a guitar and just going "ZZHHHH!" [makes shimmery clanging guitar noise with actions]. Or very rarely.

I wish it did just start like that.
JH: Yeah! But it's usually…
YC: A good melody.
JH: Then we build it from there and try to make it interesting.

Do you acknowledge the huge juxtaposition of your pop music and the sometimes extremely heavy and depressing lyrics?
JC: Yeah, we like that.
YC: Are we depressing, really?!

I think so. A lot of people have been saying how you buck the trends of shoegaze (which you're apparently in thrall to) by actually being upbeat which, musically, is fairly true. One look at the lyrics nullifies that though.
JH: That is something we really like in general. I like it in life, in movies, everything. And you made it farther than most people before mentioning shoegaze, man!
YC: We like that juxtaposition. Even people like Mozart…
JH: Mozart?!
YC: Yeah, whenever he was really depressed he would write a really happy song.
JH: Oh, yeah. Fair enough.

There's an awful lot of romance and even sex in your lyrics, is that a big inspiration for you?
JH: I think you [Yuki] do that a little more than I do, right? That's fair. I write more of the weird stuff.
YC: Yeah, but then the 'Strawberries' thing was your idea, but I fleshed it out and made a whole crazy story. James had a fever, he was sick and he kept talking about strawberries. I was like, "that sounds so insane," I didn't know what to think, but then I thought I'd try and write down some words. I had this visual of endless fields of strawberries all screaming at once! [Starts giggling] It was like, everybody staying the same and all screaming and desperately wanting to be heard. A bunch of clones all desperate for attention.
JH: That's a good one, I hadn't thought of it that way.
YC: Well, now you know!

Why were you feverish, James?
JH: I ate some questionable hummus. It was a bad night…

Do you let anyone else know the meaning of the Japanese lyrics? Do you find it's a good way of hiding what you're saying?
YC: It's no secret, it's not like "I CAN’T tell you!"
JH: I think we have surprisingly little interest in them!
YC: Usually the lyrics are dictated by the flow of the melody and the rhythm, but sometimes when it's emotional content for me then it helps that the lyrics are in Japanese.

Aesthetically, despite your pop credentials, you have a very psychedelic self-image. Your album artwork is by Sean McCabe, yes? (McCabe has worked with Interpol, Mates of State and Spoon, among others. Check his work here.)
JH: We love Sean.
YC: He's really into movie posters and things from all over the world, so there's that element…
JH: We actually pushed the psychedelic stuff onto him, I really like that kind of stuff. Any kind of pop art.

What kind of psychedelia do you listen to?
JH: All of it. All the German stuff, all the English stuff.

I was listening to the new Acid Mother's Temple LP at work today, it's really good.
JH: Oh man, we're so psyched, we're playing with them! I've seen them five times now… They improvise so much, but when they're on, wow. It's like, three hours. Peaks and fells.

Anything more you want to tell me about the new material?
JH: It's coming.

Is it sounding different?
JH: Yeah.

In what way?
YC: We don't want to trap ourselves into anything.
JH: We're big on the idea of revision. You know the song 'Strings' on Citrus? That was upbeat at one point. We added the chorus again to make it more poppy, which goes back to our little balance thing.

That balance is proper old Twee trick.
JH: I'm back on Twee. I was off Twee big time. I suddenly the Camera Obscura record through the wall when I was taking a shower, I gotta get that.
YC: There was a time when all you would talk about was Guided By Voices. Everything was Guided By Voices, all their different setlists, all their lyrics, all their eras… I was like, "this needs to end!"

I'm fresh out of things to ask you. Is there anything else you want to chat about?
[Lengthy pause] JH: …My Bloody Valentine?

Asobi Seksu’s Citrus is out now on One Little Indian, and the single ‘Strawberries’ is released on Monday, November 12. For more information and tour dates, click through to their MySpace.