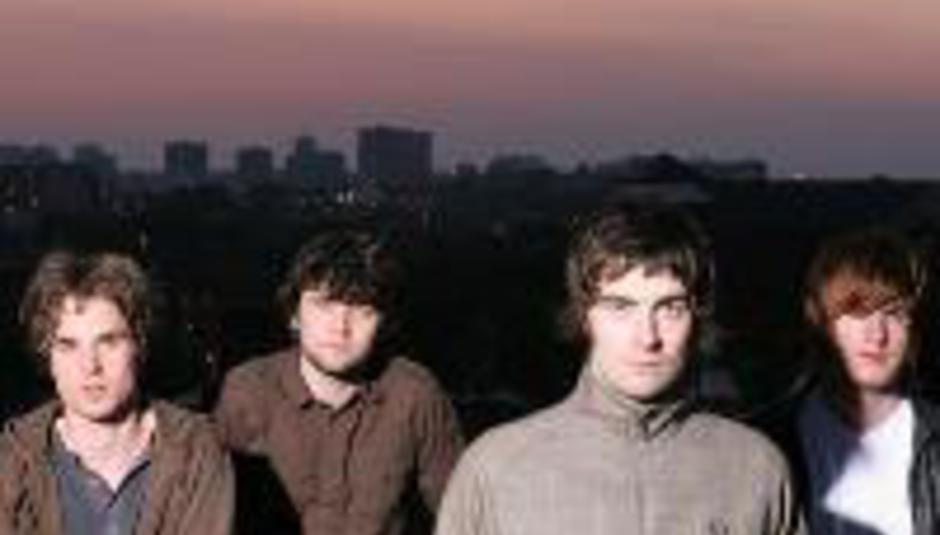 There's nothing better than a band or artist that can divide opinion straight down the middle. Radiohead, Oasis and Pete Doherty are three that immediately spring to mind, and it won't be long before The Courteeners are added to that list, if they haven’t been already.

Ian Brown recently said that too many of today's artists spoke like politicians, saying nothing of any real interest other than toeing the industry line and repeating what most people already knew. Enter one Liam Fray, frontman, guitarist and main songwriter with Manchester quartet The Courteeners. In the few months his band have been in the public eye he's already made a name for himself as someone who likes to share his opinion somewhat - no matter what it may be - and this evening, before the band's first date as main support on The Coral tour, is no exception.

First things first, how did The Courteeners come about?
Michael: Me and Liam only live a couple of doors away from each other, and we've been friends for a long while anyway, so we started writing together about a year or so ago. He'd got a drum kit in his garage and I went round his house for a beer one night and he started playing me some songs he'd written and asked me to just play along and then he dropped the bombshell: "You're playing them live with me next Thursday". I was gob smacked. I'd never heard the songs before, never played drums before and now I'd got to learn these songs straight away for a live show! Madness... but it just grew from there, really. Three songs became six songs and then twelve, and so on. We decided that we really needed to get a full band together to make it work, so here we are.

This time last year you were unknown outside of Manchester, yet now you're being touted as the Next Big Thing. How weird must that be?
Michael: Yeah, it's crazy to be honest. But I think we've got ourselves noticed through hard graft. We've played loads of support shows all over Manchester and the North West, and just got ourselves onto bills by pestering venues and promoters.

How many gigs have the band played to date?
Liam: About 50 as The Courteeners.

So were you called something else beforehand?
Liam: No, no. It was just Liam Fray when me and (Michael) Campbell started playing.
Michael: We didn't see the point in calling it a name until we got a full band together.

Your sudden rise to prominence is obviously going to arouse suspicion though in some quarters.
Liam: I think we've got the songs to carry it, and to justify any claims made about this band to be honest. I think we first realised something was gonna happen just before 'Cavorting' came out and when we took a step back and realised how fast it had happened then yeah, maybe some people would think something dodgy was going on. But I don't think it's without merit. I mean, we did 40-odd gigs in that year and worked really hard in rehearsals, writing new songs and generally improving what we already had.

You've also gained a reputation for saying what you think about other bands.
Liam: It's a bit strange because some of those interviews seem to have missed the point. I mean, most journalists only print about three per cent of what you say, don't they...?

We don't.
Liam: But it is all about whatever is perceived to be interesting. If a journalist thinks something I've said is funny or controversial, he'd rather print that than something positive about our band, which is a little upsetting but I guess something you have to accept in this business.

So do you feel you've been misquoted in stories where you've supposedly said that The Courteeners are better than everyone else?
Liam: It's a difficult situation, really. I mean, I do think we're different to everyone else, but then some people would take that as me saying we're better than everyone else. I mean, for me, the main difference between us and a lot of bands is that we are genuinely friends, and have been acquaintances for a number of years, long before The Courteeners came about. What really annoys me though is when people refer to that as a ‘gang mentality’. I mean, what on earth is a ‘gang mentality’? Does that mean we're supposed to go around twatting people? We've been best friends since we were about nine. That doesn't mean we're into mindless violence!

So what is your own main motivation for the band?
Liam: If you're not motivated you shouldn't be in a band for a start. But no, I do want this band to be the best, and the only way we'll do that is by giving everything we've got all of the time. There's no excuses for bands that just turn up and play half-arsed sets in a can't-be-bothered way. I went to V Festival in August and watched about 15 bands and all of them, bar The Cribs, gave the impression they couldn't give a fuck. I mean, I appreciate that you're contractually obliged to be there and a festival crowd may not be all of your regular audience, but surely that should give you even more reason to actually go for it.

You mention The Cribs as being another band with the drive and passion that you possess. Would you say there are any other bands who strike you as being similar?
Liam: No, definitely not. The Coral maybe. We haven't played a show yet where I didn't think we were the best band on the bill. We played with The Long Blondes in one of our first ever shows when there was a massive buzz around them being signed, and I thought they were shit live to be honest. I've seen them since and they were better but... we've played with The Rumble Strips as well, another band who I don't really understand. How can a band pride themselves on sounding like, being compared to and then being photographed with someone else? It's ridiculous, ripping Dexy's Midnight Runners off just to get signed.

A lot of bands put their success down to luck, but surely you have to make your own luck in the music industry?
Liam: Do you know what, that's spot on. There are too many bad luck stories from bands who say it's all about being in the right place at the right time, and that's just bollocks as far as I'm concerned. It's all about putting the effort in and working your arse off. There might be a couple of bands who slip the net but 99 per cent of the time if you're any good and you've put the commitment in, you'll get noticed.

Your next single, 'Acryllic', has been getting a lot of radio airplay and contains the line "You're just like plasticine being moulded into a libertine dream". What are the lyrics about?
Liam: Ha ha ha! It's all in the first line isn't it? It's about bands who think they've got to look and sound a certain way to get on rather than be something themselves. Someone came up to me the other day and started saying, "I love that song ‘cause it's anti-Libertines", which is bollocks, because we love The Libertines, but it's our way of telling other bands you don't have to be a carbon copy of someone else to get noticed. In a way it's our most tongue-in-cheek song as well.

With both 'Cavorting' and 'Acryllic' you've released a couple of impressive early singles, songs that some might say even at this early stage you'll have difficulty bettering. What do you reckon to that?
Liam: I reckon I could write ten songs in a week better than either of them. We've got a song called 'You're Not 19 Forever' which I reckon knots spots off anything else we've got. It will probably be the next single and should blow people's socks off. If it doesn't then they probably go around wearing sandals or something! We've got another song called 'Please Don't' which I think is better than anything I've heard in years.

So you've basically got an album's worth of songs already?
Liam: At least one album's worth, yeah. I've got 60-odd demos knocking around in my room.

Your manager is Conrad Murray from SJM Promotions. How did you get involved with someone so highly reputable in the business at such an early stage?
Liam: Conrad's been one of my best mates for the last couple of years. I did a solo gig at In The City a couple of years on my own at about 4pm - it was a matinee show - and I was half-cut as I'd been up from the night before, and I looked a right mess. The thing was though, it was in this little jazz club and people were up dancing, which is unheard of there, and Conrad was at the back and we got talking and hit it off straight away. He introduced me to Rob and Dave from Northern Ambition Records and I've been working with the three of them ever since, both as a solo artist and then with The Courteeners. The funny thing is, ever since we were featured in the NME, we've had so many offers from people wanting to manage us!

Obviously there's another Liam from Manchester who might not want the new Liam on the block to steal his thunder. How do you feel being compared with him?
Michael: I think every interview we've done so far has brought that question up, but whether you're from Manchester with a frontman called Liam or Nottingham with a frontman called Steve, you're always going to be compared with people like Liam Gallagher anyway.

What are your favourite three albums of all time?
Liam: Stephen Fretwell’s Hate Songs, Yeah Yeah Yeahs’ Fever To Tell, and possibly the first Concretes album. I might add a fourth as well: The Stone Roses’ debut album.
Michael: Too many to say, although I've been in Lancaster all weekend and on the way home I was listening to Hard Day's Night by The Beatles and it's immense. In fact any of the early Beatles records. Perfect in every sense.
Liam: You can almost imagine them sitting there writing a song like 'Please Please Me', and John saying to Ringo: “I wonder if someone else is going to write something better than this?” And then having that same conversation nine albums later!

The single 'Acryllic' is out on Loog Records on October 22. An album is set to follow in the early part of 2008.

For more information on The Courteeners visit their MYSPACE page.