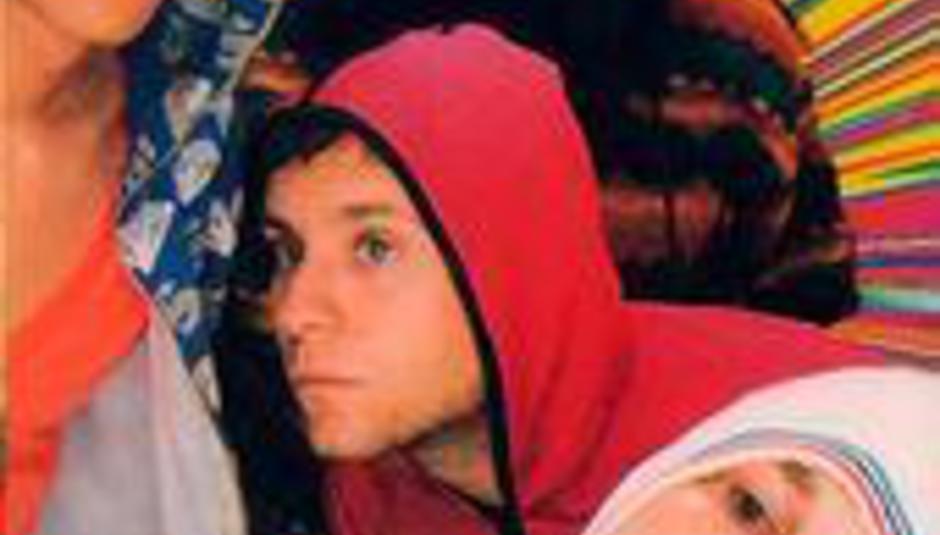 "It is a very tight-knit community scene based mostly around The Smell," states slight Seattle-born lead vocalist Duzsik. "It’s really eclectic. It’s hard to explain how it all works because around that scene there is a very strict criteria and restrictions, but rather than based on your genre it is more to do with ideals and character."

"Basically, Jim [Smith] - who runs The Smell - sets an incredible precedent. He works a full-time job as a union organiser and he’s there every night cleaning up whilst everything is volunteered and all the money goes to the bands."

Initially the network of bands seems to have an elitist quality to it all, but Famiglietta, HEALTH's bassist and general noise-mongerer, is keen to distance this notion: "The great thing about it, though, is that is that it is completely unpretentious and there isn’t an attitude where we’re politically domineering and it’s easy to be around."

HEALTH (with Aa) - 'Crimewave' at The Smell

Quite the nature of this is reflected in HEALTH's recent collaborative split releases with Toronto glitch merchants Crystal Castles and Manchester-based peculiarities Eye Hai.

"We spoke to Crystal Castles and made friends a long time ago, way before they toured and became such a sensation in the UK," says Famiglietta. "So we started touring with them and asked if they wanted to do a split or a remix. They had become more popular and we hadn't done shit and thought they were out of our league by then. But after an e-mail it was then arranged and we met in person at SxSW in March and there was nothing elaborate about it. We just said that we like their band a lot and like their remixes and asked whether they would want to do a split. Only then we had trouble trying to find labels and deals, despite it all having their name on."

The UK have increasingly turned their backs upon engaging an underage audience in a traditional setting. Whether or not this is merely through bar legislation or otherwise, HEALTH have peddled their volatile experimental noise to this eager crowd. These are the individuals that carry an act, engage with them and buy both into what is on stage and what is on the merchandise table. Duzsik appreciates this.

"In America it's almost imperative to not. You guys have a different scene over here. You need spaces and cannot have any loft, basement or art shows. [...] The reason we absolutely try to make sure we play all-ages shows is that in the US for our kind of music if you play a show at a bar typically people aren't going to buy anything, spend money or particularly care, and though it's not just about buying stuff it's a gauge of knowing how you impacted on them and their experience more so than some indoctrinated twenty-something scenester with their designer coat on."

HEALTH - 'Glitter Pills' (at The Smell)

Their debut record successfully encompasses elements of the raucous racket their live performance provides, erupting at the seams. Duzsik perceives this as largely down to the meticulous focus that went into the recording.

"We did it ourselves so we could have a ridiculous amount of ownership over the record. There is a character to the record that we wanted and why we avoided certain studios and that character is there."

"Most recordings these days are done in with a super dry control sound, but we wanted it to sound like a big fucking old record in ways but didn't have any money, so recording at The Smell which was free and we could take forever helped. In LA what you would spend on renting a studio elsewhere you could spend on renting microphones costing $4000 for $100 for the weekend which you couldn’t do in the cities."

Famiglietta cuts in: "It took us, like, ten completely inefficient months where we went on tour, we slacked off, we had four-day weekends. But the end result has been worth it."

HEALTH is released in the US on September 18 on Lovepump United.