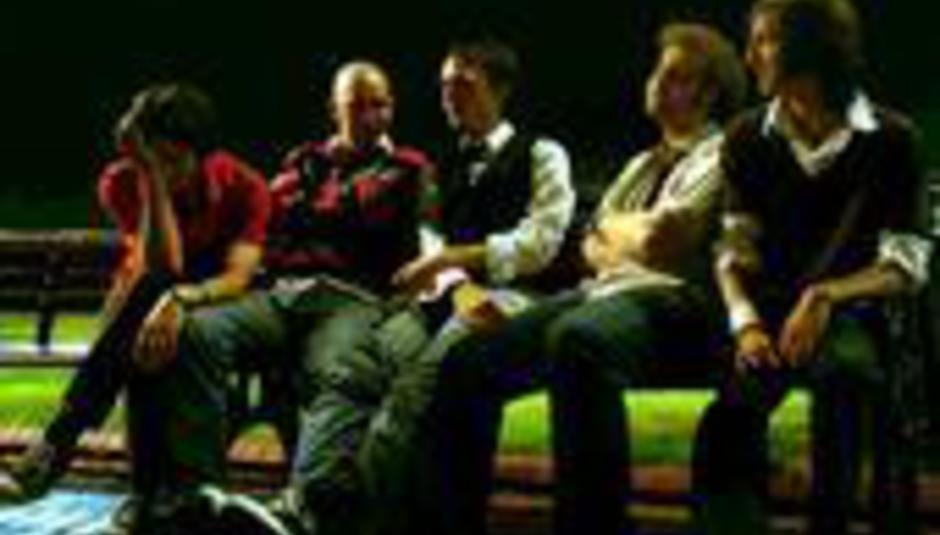 It's been four years now since Love Ends Disaster! played their first show in front of an assortment of fellow undergraduates and friends, and yet to all intents and purposes they remain a relatively unknown quantity outside the confines of their native East Midlands.

Hopefully all that is about to change as they’ve just recently released their quite frankly ace new single 'Ladders' via Loughborough-based independent label Yellownoise, and with a glut of exciting shows lined up the future looks far from ending in disaster.

Unlike many bands, LED! have remained true to their original core members, the current five-piece - Matt Oakes (vocals), Jon Dix (guitars/synths), Rob Sadler (guitars/keyboards), Matt Dix (bass), and Pete Jones (drums) - having been together from their conception right up to the present day.

DiS caught up with the elder sibling of the two Dix brothers, Jon, while on a lunch break, and found him in a most buoyant, yet unassumingly charming mood.

For a band that has been together as long as you have, does it feel strange to still be referred to as ‘newcomers’?
No, not at all, as to most people we are. I mean, even people that may have been aware of us four years ago, from the outset, probably wouldn't recognise how our sound has developed over that time, as with hindsight we probably were a bit like the atypical student band to begin with.

So where do you see the band as having developed, generally?
Well I think it comes from the fact we have five different characters in our line-up contributing a vast range of musical influences. I mean, in the early days I think we were all spurred on by garage rock to start the band, but then over time I've found myself listening to more and more dark electronica and the like, whereas other members of the band have veered off elsewhere. I think the only common band we share at the minute is a love of Arcade Fire, or certainly their ambition to create something extraordinary. We don't conform to any set structure, never have and probably never will, and I think that is one of the reasons we're still here developing because we haven't latched onto or been thrown in with any scene, or subsequently disappeared at the end of it.

Because of where you are based - two thirds in Loughborough and the rest in Nottingham - do you feel this has been beneficial in that you can pick and choose the best bits of the East Midlands' music scene rather than go along with what's the expected norm in any one city?
In some ways I suppose we can, although we've always set out to exist purely on our own terms. Personally I see us as being a Nottingham band, as we've played the majority of our shows - and certainly our most memorable ones - in that city, and I think it's fair to say that the majority of our fan base comes from there as well. I like Nottingham because it has always been good for us, and the fact that there is no specific "Nottingham sound" has helped the band develop in its own way.

Certainly the difference between the likes of 'John Major's Megadrive' on your first demo and the current single is immense, almost to the point of it sounding like an entirely different band. You've had some positive feedback for the single...
Yeah we seem to have finally nailed the type of sound that we've been after from the start. I think it's our poppiest song to date, while other people have said that they think it's almost like a song divided into three parts, which we can agree with as we do have a habit of moulding things together in practice. Colin Murray has been playing it on Radio 1 and I believe we've had several good reviews, so yeah, we can't complain one bit.

It also seems that you've managed to get the production sorted out after last year's Faster! Faster! EP, which contained some of your most notable live songs but sounded badly recorded…
I think we want to forget about Faster! Faster! really, just delete it from history if possible, which is a shame because all of the songs on that EP are among our favourites to play live, but for whatever reason nothing went right during the recording sessions there. I think the most disappointing thing from my point of view is that we'd always intended 'Fort Washington', the lead track on Faster! Faster!, to be our big single, but obviously things didn't turn out that way. We've got a guy called Jez Burns working with us now who produced the last Quartershade single, and he seems to know exactly what we're after and how to achieve it.

Are there any plans to re-record those songs at a later date?
I think we may well record 'Fort Washington' again, definitely, as we're planning to get an album together by the summer and have already got the next single ('Suzanne') recorded and ready to go. I think we're just not sure who is going to release it for us but it's early days yet.

Have you any advice for other bands just starting out?
Don't get disheartened, always be true to yourself, and don't let other people push you into doing something you don't feel is right.

Finally, are there any other bands out there you think aren't getting the recognition they deserve at present?
Yeah, I think Lo Ego are one of the most underrated bands in the country at present, as are Quartershade, while The Exploits Of Elaine and Popular Workshop are two of the most innovative and original groups I know of.

The single 'Ladders' / 'A Dream Ends Chaotically' is out NOW, and the band are lined up for the following dates:

May
18 Middlesbrough The Dickens (The Gold Room)

For more information on Love Ends Disaster! visit their MySpace.