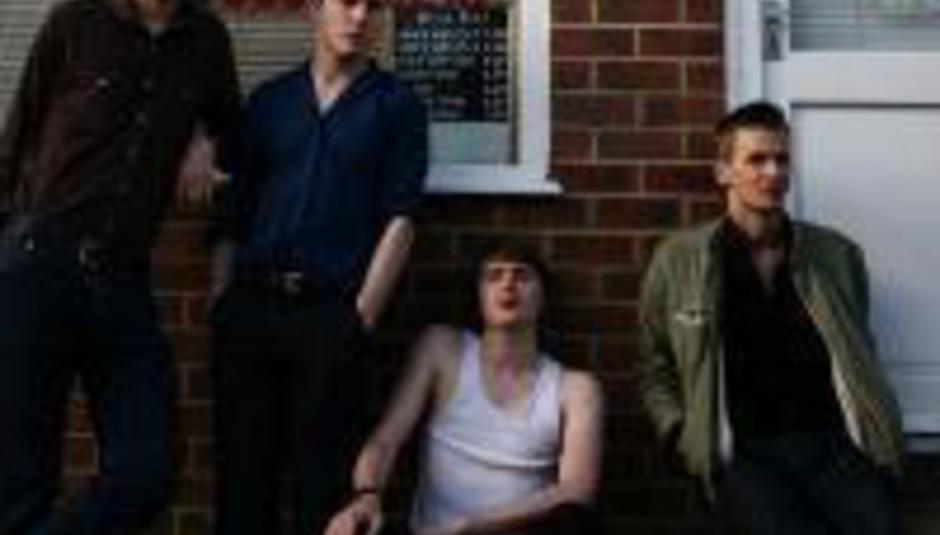 Sick to the back teeth of rock’s eternally recurring leitmotifs? Looking for a way out that doesn’t involve pretending to dig freeform jazz? Is the single most disappointing quote you can recall the one where Thom Yorke said he’d “had it with melody” in the run-up to the release of Kid A?

If your answer to all of the above is “yes, but not as bored as I am with your rambling intro”, chances are you’ll need the heads-up on Domino’s latest signings, Wild Beasts.

They’re a Kendal-hailing quartet whose music brilliantly distils all the best eccentricities of pop’s lunatic fringe; a genuine poetic sensibility nurtured in the hills of the Lake District and perfected in the hotbed of Leeds’ flourishing music scene. They are, in short, the real deal, even after you get past singer Hayden Thorpe’s extraordinary, pubescent choirboy wail.

Hayden talks pop psychology with DiS: “We see ourselves as pop in the sense that something can be popular and still be worthwhile, even if we can’t exactly see ourselves appearing on _Top of the Pops.”_

Bassist Tom Fleming agrees: “The indie badge has almost become a tag of shame now. Some of the music masquerading under that name is so conservative; it’s not really worth its salt.”

To date the band has only one single to its name, a giddy music hall ode to grabbing life by the short and curlies improbably titled ‘Brave Bulging Buoyant Clairvoyants’. The best bit in the song is when it shifts unexpectedly from whimsical lines about slapping the face of Aristotle to a beautiful, solemn coda that’s all eerie chords and fabulous interplay between Hayden’s soaring lead vocal and Tom’s haunting tenor refrain. Like all great debut singles, it works as an effective mission statement – life is for living, but it’s not a burden the Beasts are carrying lightly.

Not that they’re giving anything away, as Hayden is quick to point out: “People don’t need lyrics explaining, it’s an insult to their imaginations. We want to be loved but we want people to come to us, we’re too used to having things served up to us on a plate these days.”

The band takes its name from a modernist art movement (Fauvism, from the French word ‘fauve’ meaning literally ‘wild beast’) which caused something of a stir among the establishment of the early 20th Century.

Hayden explains: “I liked the way the Fauvistes’ art was quite subtle and striking. They were set up to be this outrageous thing but they were just doing what came naturally to them, which is how I’ve always felt we would be, even from before we started gigging.

“Of course, it’s also a nice irony that we’re actually these mild-mannered white boys who don’t indulge in cock rock.”

You can see what he means about being misunderstood - onstage, Wild Beasts skirt a fine line between the sublime and the ridiculous which leaves some people scratching their heads and others twitching with rage. Not confrontational, exactly, but shocking all the same.

Hayden: “We’ve had people slate us and some who’ve said it’s the best thing they’ve ever heard. But we’ve not gone out deliberately to get a reaction, we’re just being ourselves. We’re not going to censor ourselves at all. Songs shouldn’t be comfortable to sing, there should be that element almost of doing something wrong.”

Tom: “It’s also that element of stepping into another place, there’s nothing more annoying than performers purporting to be honest, because being honest in art and in life are different things. There’s a difference between being honest and being earnest.”

Perhaps aware that the interview is taking a turn for the earnest itself, I ask if they’ve had any star-struck moments over the last few months.

“Not really,” says Hayden. “Although The Horrors came down to one show in London, you could see their hair in the crowd. But that was less a star-struck moment than a 'wanting-to-strike-a-star' moment.”

Ah, you know where you are with a good bitch. Now we just need a soundbite. Asking myself what Fearne Cotton would do, I ask them what beasts they would like to be reincarnated as.

Genius. A few band members mutter things like ‘panda’ and ‘cranefly’ in a non-committal manner, nothing too shocking really, then the money quote flies out of nowhere.

_ “I’d like to go to a bullfight,”_ offers Hayden. “They strap a mattress to their bellies to keep their insides in. There’s only one way to kill a bull and that’s between the shoulder blades above the head. It’s an artform.”

So there you have it, ladies and gentlemen, Wild Beasts: definitely not the estranged offspring of Bryan Ferry.

Check out Wild Beasts on MySpace, here; the band’s next single, _‘Through Bad Nights’, will be released in April, after which they’ll begin work on material for Domino._