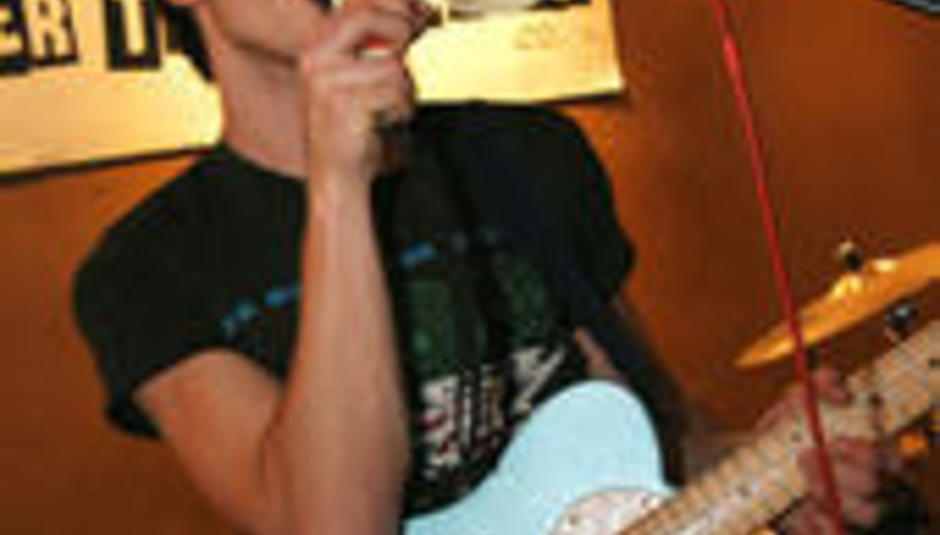 Preston three-piece The KBC have caused more than the odd spurt of enthusiasm around the world of DiS ever since their 'Pride Before The Fall' / 'Poisonous Emblem' single dropped ecstatically through the letterbox approximately this time last year.

Comprised of James Mulholland (vocals and guitars), Ric Ormerod (bass) and Michael Brown (drums), The KBC may have taken their first steps up the musical ladder three years ago but the alliance goes back a lot further than that: All three members went through school and college together. Now signed to DIY Manchester label High Voltage, 2007 promises to be a very exciting year indeed...

DiS spoke to main songwriter James Mulholland about life in his hometown, the band's several-headed musical direction and the London media's fascination with something called 'New Rave'. Take it away, James...

"There's nothing at all in Preston to get excited about," moans James. "That's why we've pretty much re-located to Manchester - and the fact our label, High Voltage, are based there too."

Of course, the band's involvement with High Voltage has been quite synonymous with their rise to prominence. They're now being talked about, alongside Leeds-based kindred spirits The Sunshine Underground, as the north's answer to the south's latest fad, 'New Rave'.

"Oh don't get me started on that!" despairs James. "It's another one of those attempts at building a scene around a few bands who may have the most inconspicuous of links but who by and large have little or nothing in common at all. It's probably gonna get a few people more exposure for now than they would've normally have gotten, but in the long term, once the press get bored of this scene, what happens next? You're forgotten about, past it, extinct before your time. We don't want to get caught in that trap."

So I guess a move to London is out of the question, then?

"Too right it is! I mean, we've played in London maybe half a dozen times now and gone down pretty well on every occasion we've played there, but it's just so cliquey and full of A&R men making empty promises that we just don't see ourselves fitting in at all."

If there's one thing that The KBC do well it would have to be NOT fitting in, regardless of current fashion or genre tastes. Whilst their sound has obviously been constructed around the premise that big choruses and big guitars = musical supremacy, they also have one ear firmly tuned to the dancefloor, something that many of their peers seem frightened to do.

"Yeah that's true. When we first started the band we didn't use vocals and our music was more experimental - loads of keyboard sounds all over the place - and probably akin to some of the more accessible Warp Records stuff or even a less beat-heavy Chemical Brothers. But the more rock and pop stuff we listened to, the more we realised this was a direction we wanted to encompass in our music. The biggest challenge was finding a vocalist, because at the time none of us fancied singing, so we advertised for a singer and set up some rehearsals. We soon realised that it wasn't right, as we were all mates that went back such a long time, so because I'd been writing most of the lyrics I became the singer."

The band's music sounds like it's still developing, as every song seems to be a more diverse follow-on from the last. Would that be a fair assumption?

"I think, as we become more experienced in what we're doing, our sound will gain its own identity. At this moment in time we're still playing around with a lot of new ideas."

Lyrically, The KBC are even more ambiguous than their music suggests, as previous single 'Not Anymore' could be about a number of things, from a severed relationship to the state of the nation, while the aforementioned 'Poisonous Emblem', with its opening rant of "Hello, are you looking to buy from me?/we've got stones and packets of herbal tea..." isn't your average boy-meets-girl love story, either.

"No, 'Poisonous Emblem' is about someone who lives in a fantasy world. It's a bit of an in-joke about someone we went to college with. Does he know about the song? I don't think so... well I haven't told him, anyway! I guess the majority of our songs are social commentaries or just little excerpts about the best things that I've experienced in my lifetime."

With a single, 'Test The Water', due out on 27th November and an album to follow in February of next year, James will have a few more good things to talk about in the coming months.