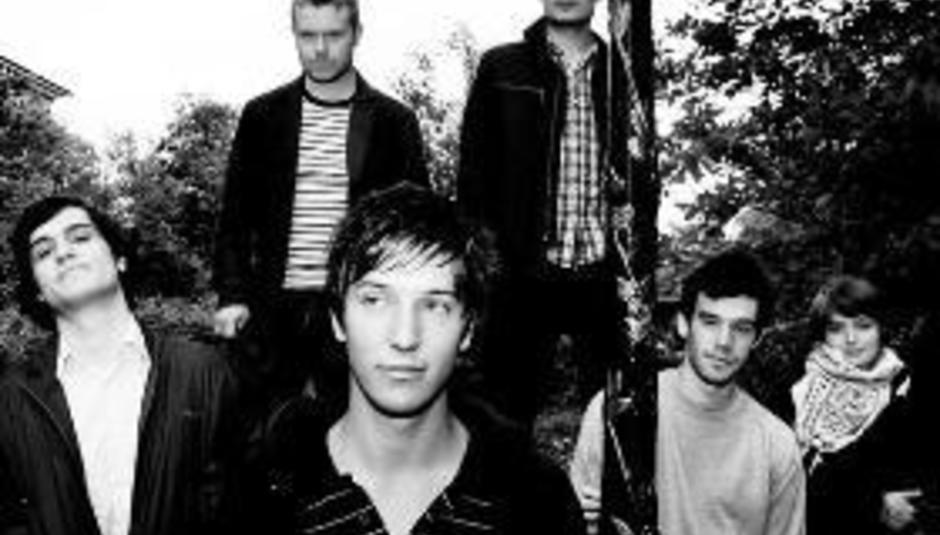 Championed by DiS since their very first demo arrived on the doorstep, Leicester based sextet redcarsgofaster are a distinct bunch - their music can be aligned to such mixed emotions as dancing, standing still, screaming, pausing, fighting and smiling. Usually one after the other and often at irregular intervals during the same song.

Initially conceived around the back end of 2003 and christened a few months later, redcarsgofaster emerged in the wake of bands like The Cooper Temple Clause and Oceansize as a clarion call against those whose interpretation of genre staidness was simply about watching four blokes with identical haircuts wearing various denim and leather accessories whilst singing songs their parents knew the words to better than the performers themselves.

Composed of James Summers (vocals), David Pott-Negrine (guitars), Matt Bolton (guitars), Andy Smith (bass and one-time member of Alex Kid), Phil Bolton (drums) and Megan Dean (keyboards), they’ve just reached the end of their biggest tour to date – including a riotous DiS show at Nottingham’s Rose Of England – and have released their third single for the High Voltage label, a double A-side of '24 Passes' and 'House Of Flies'.

DiS caught up with James in October while he was scouring the racks of Liverpool's HMV, prior to slaying the ravaging scouse mob with their coarse tunage.

“This tour’s not been that great to be honest,” says the rueful singer. “Leeds last night wasn’t that busy and the London show a few days ago at the Turnmills was rubbish. I guess it didn’t help that we were only added to the bill a week or so ago.”

Still, there’s always the A&R fest that is In The City to look forward to.

“Yeah, we’re looking forward to that, particularly as all the other bands on High Voltage (The KBC, Snowfight In The City Centre, The Answering Machine and Bureau) are playing on the same showcase. Sheffield on Halloween night should be good as well. We’re all dressing up for the occasion. I’m a vampire, David’s a zombie, Andy’s gonna be a ninja and Phil wants to be Darth Vader. I’m not sure what the others are doing but it’s gonna be a laugh.”

Not that life has ever been a breeze for redcarsgofaster. Having recorded their first demo within months of forming, they decided to do the honourable thing and make as many people as aware as possible, including then up-and-coming fanzine turned label High Voltage, who promptly awarded it demo of the month status. Having received their first good review, the band decided to enter a local battle of the bands competition at Leicester’s Charlotte venue. In the meantime, High Voltage founder Richard Cheetham invited them to perform at his 21st birthday party – an reengagement of sorts, if you like, and when the band scooped the £1,000 first prize at the aforementioned BOTB night, they decided to consummate the marriage with High Voltage by recording debut single ‘Sanctuary’ with the proceeds. And neither party has looked back since.

Of course, with High Voltage being based in Manchester, and redcarsgofaster, although primarily associated with Leicester (assorted band members commute from London and Sheffield respectively), being all over the shop, re-location might be on the cards, particularly as James isn’t exactly enthralled with Leicester’s music scene.

“It’s not as good as it could be. In fact, as long as I can remember Leicester has never been particularly interesting. I think people just associate the city with Kasabian when there are some good young bands – Tired Irie and Herra Hidro to name but two – that have to disassociate themselves with the place just to get themselves heard.”

However, with the music business being more southerly based as it were, the band’s discontentment with their hometown has proved more of a help than a hindrance.

“We’ve probably played twice as many shows in London as we have Leicester, and apart from the last one, always gone down a storm there. Admittedly it can come across as being a bit clique-y but we had no preconceptions to start with, other than getting our music out there to as many people as possible.”

Which of course is where that fine medium of technology called the internet has proved handy, not only providing the band with its initial positive reviews but also giving the window shopper a chance to hear the songs for themselves.

“The internet, and obviously the widespread use of MySpace, has been good for us, and music in general for that matter. Sometimes you read a description of a band in a review and don’t know whether to take the plunge and buy the record or not. Now you can actually listen to it and judge for yourself.”

Bearing the uncertainty of other people’s descriptions of certain artists’ music – their own even – how would James describe redcarsgofaster’s sound?

“I think we’re quite distinctive in that we don’t sound like anyone else at the minute. I mean, we do worry about being lumped in with the post-punk, angular, scratchy guitar sounding bands because I don’t see us as being anything like them at all. We have a loudness and intensity that most of those bands lack, while lyrically we actually make an effort to say something more meaningful than 'We’re on a lads night out on the dancefloor', or whatever.”

And James should know, being the main lyricist within the band, but he has a point. Previous single ‘Micro’, for example, is a fascinating journey about reading too much into someone’s facial expressions, and the subconscious gestures that can either build or destroy a relationship. Set to a mix of raucous guitars, squelching keys and pounding rhythms, of course.

“I studied philosophy at university so I guess it was better to write about situations I knew about.”

In fact, James is quite content with all of redcarsgofaster’s output to date, and insists that the best is still to come.

“We’ve been listening to a lot of At The Drive-In, Sonic Youth and ...And You Will Know Us By The Trail Of Dead recently, and we’ve just finished this new song – it doesn’t have a title just yet though – that is by far the heaviest thing we’ve ever done. It doesn’t let up for about four minutes and saps away at your impulses by the second.”

The shape of things to come? We sincerely hope so.

'24 Passes'/'House Of Flies' is out now via High Voltage. Check out the band's website here and their MySpace here.