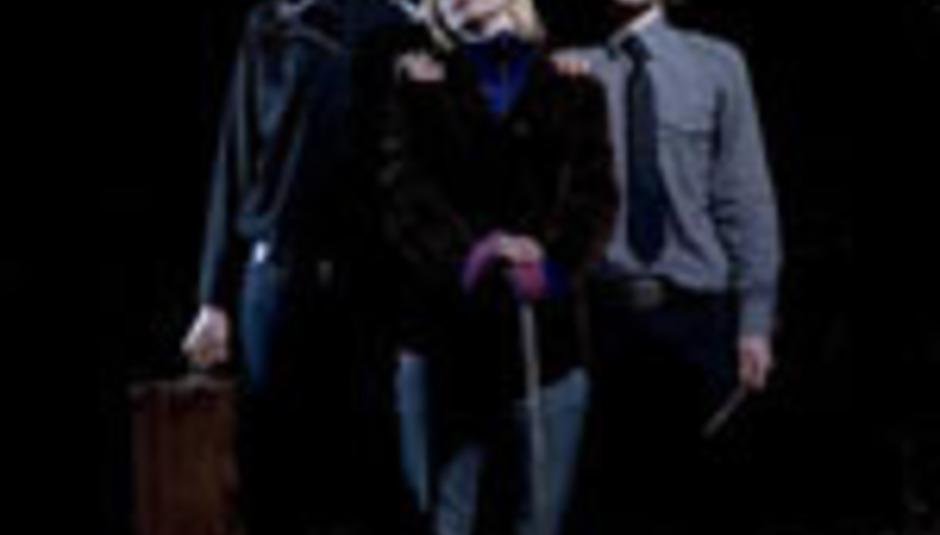 David Line, vocalist and guitarist for British rock outfit Seafood, is in good shape. Despite recent health complications, the 32 year old - dressed in baggy jeans and a loose-fitting t-shirt – paints a portrait of a man teeming with youthful exuberance and energy. Kevin Penney, Caroline Banks and touring recruit Alex compliment this energy with a powerful musical tightness and a renewed focus within the band.

Tonight, the band play to 350 fans that have waited for over a year-and-a-half for the return of Seafood, and within the four walls of a renovated church in Norwich, there will be pandemonium. Their comeback tour, so far, has been well received, with numerous dates selling out. While eating his meal, David begins: “It's brilliant being back on the road again, we’re really happy that people are coming to see us.” He jokes, “We’re pleasantly exhausted.”

And so they should be - the past couple of years have been a rough ride for Seafood. David’s health has suffered – lung problems meant he was confined to the hospital bed for months, and consequently he had to have his lung super-glued to his chest, rendering the band unable to function properly. David explains:

“We couldn’t do anything. It’s not like the bass player being ill, where someone else can step in and learn the parts. I’m the voice of Seafood.”

Kevin (guitars) felt the pain, too: “We were all annoyed because we couldn’t tour, but then you see Dave sitting in hospital and it puts it all into perspective. I’ve never felt sorry for someone for so long.”

2004's As The Cry Flows was a success with the music press - a new direction and maturity in Seafood’s sound had some critics hailing the album as a ‘melodic masterpiece’. However, it received a lukewarm reception from some fans, as the Sonic Youth-esque sound that defined the band was ditched in favour of folk-tinged acoustic numbers – a complete shift in direction.

“After we were dropped by Infectious (after 2001's When Do We Start Fighting album), we were left with a bunch of acoustic songs, we wanted to do something different”, says David.

Due to fact that the band were unable to tour and promote As The Cry Flows, the band slipped into relative obscurity, with almost no word from the band for months - “The Truck Festival organisers didn’t even realise we still existed.” The band had, in fact, been working on getting back to the definitive Seafood sound, and re-evaluating what they were doing. Their new long-player Paper Crown King, produced by Kevin and David, is by their own admission “A guitar album.” David explains:

“We wanted to write an album that was coherent and flowed, and we wanted to reflect how we sounded live. We’ve grown up a lot, and we’re really proud of this album.”

After recording the album, the sad news emerged that bassist and co-founder Kevin Hendrick had left the band. “It was hard for Kev to balance all his projects; he had to re-assess what his priorities were”, the band tell me. “We’re still friends though.” Consequently, Seafood had to find someone willing to help out on touring duties. Step in new-boy Alex, whose credits include numerous musical projects in America as well as a stint playing in Mojave 3. Dressed in a stylish Flash Gordon t-shirt and flip-flops, Alex tells me: “I’ve known David since the start, so I was quite happy to help out”.

The first single to be lifted from Paper Crown King is ‘Signal Sparks’, an anthem with lyrics inspired by David’s well-documented illness. Says the singer: “It’s a different direction for us, but it’s very Seafood. I can see how people would find it boring in its structure.” After finishing his meal, Kevin explains: “Lyrically it summed up everything that has happened in the last two years. It’s a song of hope.” DiS gave it a rave review here, but certain sections of the press refuse to talk about the band anymore.

“We understand it’s healthy for any magazine or internet publication to support new music, but some people have a problem with supporting any band that has been around a long time, because they think it might deem their publication stale or old-hat,” says David, wide-eyed and alert. “I used to be really worried that we weren’t in the NME anymore, but then I realised that the NME has to talk about what’s current - it’s a youth-culture magazine. It’s just a shame that we don’t get more recognition for the fact that we’ve been around for so long and are liked by a lot of people.”

Seafood are relying on the future, forgetting the past and focusing on the present. The problems that have plagued the band before are gone, and the quartet aren’t letting things get on top of them again. “We’re not worried about getting into the Top 40 anymore - we’ve never really fitted in with what’s happening in the industry anyway. Now we’re just doing it because we love writing songs, and while people are still turning up for shows, we’ll carry on doing it.” The band also seem to be having a lot of fun while they’re at it: “Naked wrestling is standard tour practice”, Kevin says. “There’s also been lots of fully clothed humping, onstage fighting and general grinding going on too.”

The future looks optimistic, as David explains: “We’re really proud of Paper Crown King. We want tour it, and get as many people as possible to hear it. Then we’ll assess where we are and then hopefully carry on doing what we do. We’re older and wiser now, and there’s no rush anymore, and there’s no pressure to write a single. If our label wants to have us, then we’ll write another album."

It seems that Seafood are making a comeback, and a welcome comeback it is.