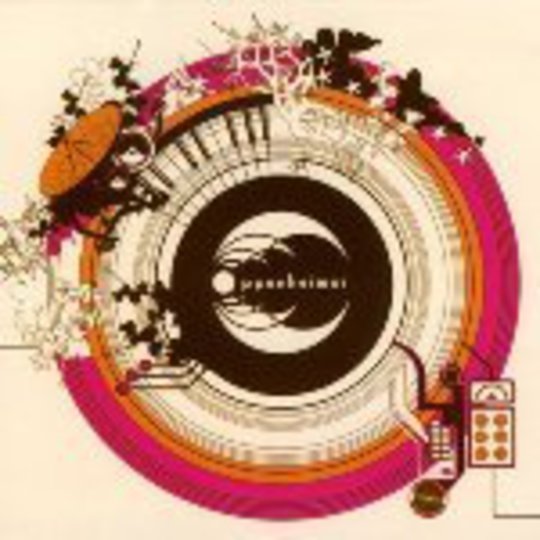 ‘This Is Not A Call’, the opening track on Oppenheimer’s debut, gives a pretty accurate idea of what this band’s headspace looks like. The lyric is quizzical, but tethered to earthly concerns whilst the music sounds like an out-of-body experience, those candied chords and sugared synth transporting us to some joyous realm. Oppenheimer are Belfast-based spacemen two, Rocky O’Reilly and Shaun Robinson. Already an established, substantial concern in Ireland, these musical body snatchers have been steadily cultivating groups of pop-tronica pod people in the US and Europe. Signed to the ultra discerning Bar/None in the US, this record now enjoys a belated UK release. The 14 tracks here are pithy and precise, rarely over three-minutes long; they make their point with concise eloquence.

Tellingly, Oppenheimer have been described as ‘Pop Disco for Electro Punks’; the fittingly-titled ‘M.O.’ captures the push and pull of the record, the siren synth drawing us near whilst the punk-infused guitar and urgent drums repel. Sci-fi rocker ‘Time Loss / Gain’ sounds like an extraterrestrial jukebox fave, the interplanetary collect-call that SETI have long awaited, whilst the glitch and thump of ‘Breakfast In NYC’ recalls Bowie circa Low, albeit with a side-order of uppers.

_ ‘Ok, Let’s Take This Outside’_ flirts with whimsy, a tad twee, especially coupled with the vocoder vocal of O’Reilly. It is one of the few less-than-excellent moments on the album as, despite appearances, cutesy isn’t really Oppenheimer’s style. Indeed, the casual sweetness of the honeyed vocals and saccharine-slathered synth masks the true heart of this album: there is grit and heartache lurking beneath the surface glister. It’s there on ‘Don’t Call Me’ and ‘My Son, The Astronaut’: “Only when your heart is bullet-proof,” sings Robinson, but fortunately Oppenheimer are as human as the rest of us. Their hearts are just as fragile, just as susceptible to the pangs of love and thwarted desire.

The band’s Northern Irish roots are reinforced by the endorsement of David Holmes, who loaned the band equipment for the making of this record, and more explicitly by Ash’s Tim Wheeler who provides vocals on ‘Orchid’. However, ‘Orchid’ disappoints: it meanders without really reaching its destination. This brief dip in quality control is more than compensated for by the closing barrage of ‘Saturday Looks Bad To Me’ and ‘This Kiss When’. The former is invigorating pop-rock, the latter a gentle electronic strum along that builds by intoxicating increments towards the chorus. Both songs are perfect examples of Oppenheimer’s contagious pop-tronica.