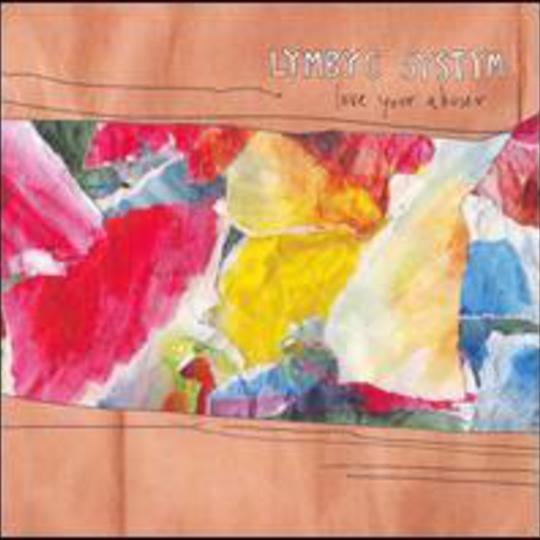 It would have been easy for Lymbyc Systym to fall into a deep, cavernous post-rock trench if they were to loiter in any one sound for too long. Although it lingers in a creative holding pattern at times,_ Love Your Abuser _breaks free from any and all constraints with enough regularity that you’ll forget about the limitations of their choice of expression and simply enjoy. They make a lot of fresh discoveries mining a genre that hasn’t by rights been completely sussed out as of yet — though like-minded acts M83, The Timeout Drawer and Dof ring a similarly curved bell — and when they’re ON they’re solid as a rock, albeit one coated in a digital-age sheen.

Most interesting is the duo’s use of rhythmic adornments. Random tom hits and snare slaps weave in and out of the fray as often as the obligatory sound effects, a strategy dabbled in by others but rarely hit upon with such regularity. Bombastic beats stutter, contort and snap right back into place before you even notice you’ve been nodding your head to the wrong cadence, and many of the drum tracks seem to flit between live and programmed status. Whether they were produced by a_ very_ lifelike machine or bashed out in real-time is often not easily discernable, but it’s part of the charm of _Love Your Abuser _because the sound of it all — even when stationary — never comes off as canned or too calculated to be human (leave that to Autechre).

That said, all humans have their weaknesses. Lymbyc Systym’s biggest innate flaw is their reliance on rudimentary synth workouts that, when layered on top of one another, tend to seem more complex than they really are. For a novice listener this won’t be a concern at all, but a studied crossover fan of rock/IDM will notice the crutches for what they are very quickly. And yet this drawback doesn’t doom this album in the least, though it does fray its edges and crease its corners a bit. What keeps_ Love Your Abuser _punching back is the aforementioned rhythm schemes and the overall variety of the compositions, which skitter between quaint bell-and-whistle arrangements, huff-and-puff post-rock and even up-tempo exercises you might hear an indie-rock ensemble taking to the bank at any given time.

These qualities in effect cancel out Lymbyc Systym’s less-likeable traits. They might toss in a cheap faux trumpet chirp or overdrive their glockenspiel a bit, sure, but they’ll make it up to you tenfold if you give them half a chance._ Love Your Abuser_ blurs the line between rock and electronic music to delightful ends, though one can imagine even greater possibilities if its makers Michael and Jared Bell were to push out even farther and rein in even faster.