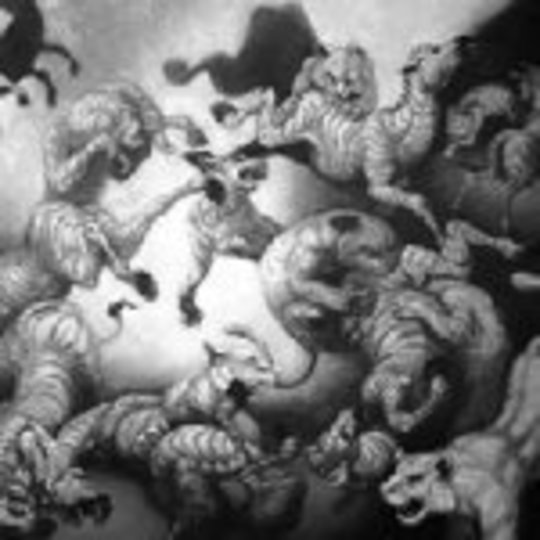 Saddle Creek’s hardly renowned as a purveyor of hard-rocking, um, rock, but with the release of this, the debut from Nebraska-spawned quartet Ladyfinger (ne), the home of Bright Eyes and more might well have inadvertently or otherwise altered their reputation somewhat.

Produced by the revered Matt Bayles, whose past production credits include Mastodon and the mighty Isis, Heavy Hands kicks off with the sort of pounding drum beat that so often heralds an eruption of spine-cracking proportions. ‘Smuggler’ doesn’t disappoint: after just 30 seconds of mood-setting menace, the song splits open to reveal a boisterous and bombastic centre. Are there politics at work? Lines like “No acceptance for the working classes” suggest so, but the average listener will spend much of the song’s duration picking their shell-shocked frame up off the ground. Thus, any message is blinded by riff after riff after riff.

The pace set by said opener rarely relents any – ‘Sea Legs’ is a grinding three minutes of rumbling bass and venom-laced vocals, and comprises just another of many heavy highlights – and while not one arrangement is of rocket science proportions, there’s meat enough across these ten tracks to sate the most rarely satisfied of rocker.

Neither metal nor particularly punk-rock in a traditional sense, Ladyfinger (ne)’s awkward-to-pigeonhole racket will disorientate some through its reluctance to let a poker face slip: it’s hard of core, but a soft, accessible outer layer ensures that the album possesses an immediacy uncommon in most rollicking releases. It’s made with love and confidence, for sure, but the four-piece’s stubbornness to provide the critic with steadfast reference points means that few hooks are available to hang its contents upon. Vocally the record recalls the shrieks of Milemarker’s Dave Laney, but stylistically the music that surrounds them couldn’t be much more different within the guitar-orientated field.

Heavy Hands is another hit for Saddle Creek, but unlike much of the label’s prior output it’s tough to put a finger on why the long-player’s so enjoyable. It jerks and twists and bludgeons, punching harder than Bumfighters on Special Brew, but never in a way that’s not been heard before, somewhere. The conclusion: familiarity need not always breed contempt.