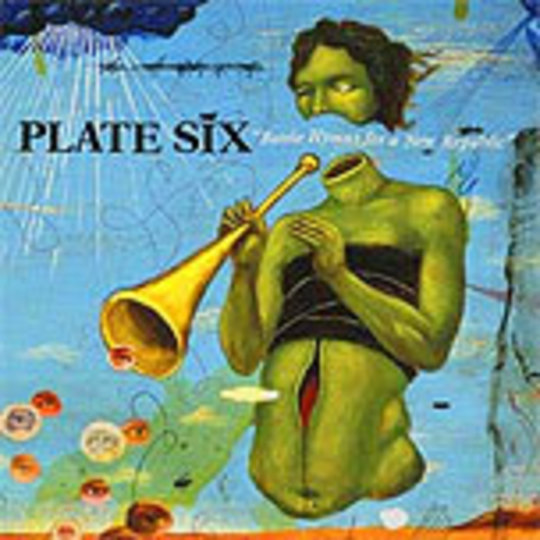 While the on-paper components are neatly in place – this Alabama three-piece have a D.I.Y. history, play as Dan Sartain’s backing band on the side, and have earned attractive comparisons to the likes of Fugazi and Hot Snakes – there’s something about Battle Hymns For A New Republic that doesn’t totally click. Plate Six’s UK debut – a co-release with their own Bent Rail Foundation label – is powerful stuff, post-hardcore done with melody and aggression measured equally, but it never truly captures the listener’s attentions in the manner of those aforementioned reference points.

The first proper song here, ‘As The Pinson Turns’, sets a tone admirably, but quite why it’s preceded with an utterly pointless minute-long instrumental introduction, ‘Hymn For Shredding Rust’, is quite beyond this writer. Surely coming out all guns blazing would have been the best course of action considering that Plate Six are an entirely new band to UK audiences and the competition music like theirs is pitched against is many and varied. This failure, however minor it may be, to instantly grab their audience is, ultimately, Plate Six’s downfall.

Gruff of voice and loud of volume, vocalist David Hickox does his best throughout to propel his band’s competent material into the realm of must-have; his efforts are appreciated, but not once over the course of eight songs – although the tracks run to 11, there are two brief instrumentals – do his throat-hoarsening takes elevate the music around them to their genre of choice’s higher echelons. Hot Water Music and Small Brown Bike have sailed these waters before, and both balanced their emotions and rage with greater skill.

It’s frustrating, really, that Battle Hymns… doesn’t make more of an impression – third, fourth, fifth time around, still nothing stands out enough to warrant repeat plays post review. It is a good album in relation to so many other releases dressed up as post-hardcore; it is worthy of absolute aficionados of the style’s time and money. But something nags, persistently, in the mind of he or she with plenty of experience in this field: had Battle Hymns… emerged five years ago it’d have almost certainly been celebrated, but today it just feels old.

Damning with faint praise though it is, Battle Hymns… is a good record. It’s just not good enough to separate itself from an immeasurable slew of also-good sound-alikes.