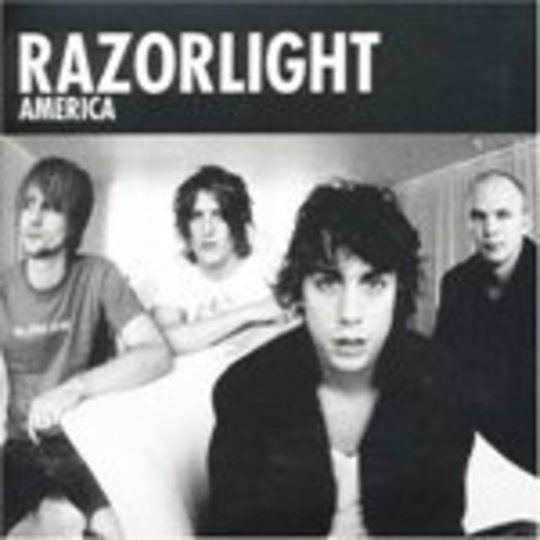 There are many, many reasons to hate Razorlight. Having reached their plateau of mediocrity with first album Up All Night, this second single from their self-titled follow-up effort presents a significant decline into a strange MOR abyss for these supposed young upstarts. It’s as though lead singer Johnny Borrell has been charting the career curve of Phil Collins, or listening devotedly to_ Blandest Songs of the 80s! Ever!_.

In other words, Razorlight have not just spread themselves thin with a song trying to appeal to everyone and anyone. No, 'America' manages to spread a teaspoonful’s worth of talent over an Olympic-size swimming pool. Or, in other words, they have wholeheartedly embraced the ethic of ‘making music for people who aren’t really into music’. This is a finely mushed paste of a song; it may taste a bit gross, but then again the infantile and often incapable palate of Joe Public will compliantly digest what is spoon-fed from the radio. It’s like settling for dog food because it’s there, rather than going into the forest to find a truffle.

Anyway, as I was saying: the radio. You see, it seems myself and Mr Borrell have something in common. His distaste for the contraption was evident on the previous, marginally less offensive single 'In the Morning', as he sang:_ “The songs on the radio sound the same”. For _'America', he cuts and pastes this trite sentiment to comment,_ “There’s nothing on the TV, nothing on the radio that means that much to me”_.

Could this plagiarism of the self be a sign of fledgling greatness, perhaps? Johnny Borrell, all gargantuan ego and errant mouth, could surely claim so. However, there is a contradiction sticking out as far as the nu-crooner’s teeth:

i) Mr Borrell has famously proclaimed that_ “If [Bob] Dylan’s making the chips, then I’m drinking the champagne.”_ Yes, he truly believes himself to be a wiser, classier lyricist than the incomparable Dylan. Which is funny because…

ii) The same Mr Borrell recently conceded in an interview that he often wrote lyrics in a rush, less than a day before they’re due to be recorded. Not really timeless poetry, then.

Of course, a cocky loudmouth rock star is certainly not a novel or shocking phenomenon. Liam Gallagher has been peddling his gorilla swagger and boorish persona for over a decade and he still makes me smile. Ian Brown, Mick Jagger, Billy Corgan, Jack White, Kings of Leon... if something has substance then style is warmly welcomed. However, the only style Razorlight proffer is that of a certain emperor proudly showing off his new wardrobe to the townspeople in chilly weather.

'America' really is a terrible piece of faux-sentiment. Lazy rhymes and thoughtless commentary pervade the song ("Yes I got the news / When you get it straight / But stand up you just can't lose"). And, worst of all, I found out today that they have scored their first UK number one with this very song. Surely this provides some evidence of redemption or distinction, a fan may argue? Unfortunately not. To them I say: look at Mr Blobby, James Blunt, Nazi Germany... Just because something is popular does not make it right or justified. And this is worse than at least two of those three.

Hole In The Earth