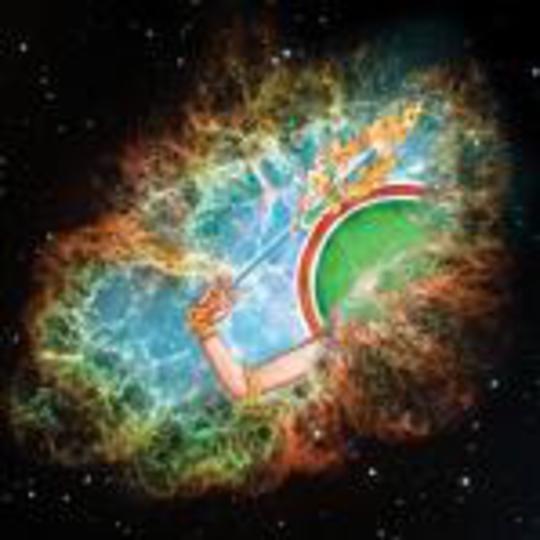 Live, Akron/Family are a mammoth affirmation of the glorious physicality of existence. Like swimming in the sea and wiping the saltwater from your eyes after breaking the surface. They pound. They scream. They strip. They howl. (See more of my eulogising here). Their comprehension of the world around them seems to be grounded in a spirituality that puts emphasis on the power of the universe, on the need to head the moment before all else. On their split LP with Angels of Light they sang: “This moment is over the idea that you / were the same when it started as when it was through”; a sentiment almost (whisper it) hippie-ish in its go-with-the-flow-ism.

At the same time, the band are capable of great moments of vulnerability and introspection; their eponymous debut was sprinkled with them. On a tour CD they sold in England earlier this year, a track called ‘Mic Check’ included the memorable line: “Your ass is a carrot / and I’ve got to have it”. Working with Michael Gira seems to have liberated the group, creatively speaking: the music that partnered Gira’s Angels on last year’s split album was virtually unrecognisable from the heartfelt, low-key folk that graced the introductory record that had surfaced just eight months earlier. They ripped through seven tracks with hurricane intensity; an awesome, virtuosic mingling of power and subtlety that ranked as one of the most impressive offerings of 2005. It’s clear they trod a fine line between earthbound introspection and cosmic exploration; if their contribution to said split was the fullest expression to date of their potential as a group of eccentric musicians, on Meek Warrior the band lean far too close to wayward spirituality for the record to count as anything other than a sideways step.

Note the New-Agey artwork. The inclusion of a song whose central lyric is “Sky high / The dolphin flies”. Opener ‘Blessing Force’ is a case in point, a conflation of innumerable genres compressed together at break-neak pace over a nine and a half minute period that encompasses murmuring, riffs and improv. Live this would be a perfect example of Akron/Family’s endearingly ramshackle musicality, on record it betrays Meek Warrior’s hectic conception: vocalist Seth Olinsky told the Young Gods website: “It was extremely crazy, and I can't remember if we have ever been more disoriented and tired before”. The album was mainly captured in the midst of a tour, in a two-day period of travel to and from Chicago to work with free-jazz drummer Hamid Drake. At times, it shows; perhaps the band would benefit from working with someone more willing to rein in their wilder impulses. Akron/Family’s best moments come when they combine their reflective and spiritual sides; on _‘Blessing Force’ and following track ‘Gone Beyond’ the titles are chanted with a mantra-like repetition that just saps the songs of any emotional resonance.

Meek Warrior was partially produced by the Broken Social Scene/Do Make Say Think crew, a fact betrayed by ‘No Space In This Realm’, all late-night horns and delicate guitars. The album picks up some much-needed coherence as it goes on: the title track is a more focused, folksy embrace of “the infinite moments”, while the quoted-earlier ‘The Rider (Dolphin Song)’ comes closest to capturing Akron/Family & Angels of Light’s bluster, a bloodthirsty scream heralding the track’s collapse into a furious five minute jam.

Nevertheless, for a record bristling with ideas and extraterrestrial fervour the overall result is a little confused. Sun Ra’s Arkestra once wrote a twenty-minute song about space being ‘the place’. But that was Sun Ra. He thought he was from Saturn. As soon as I’d heard a track like ‘Mic Check’ I was never going to go overboard on a band I love seeming to cast away from planet Earth (almost) entirely.