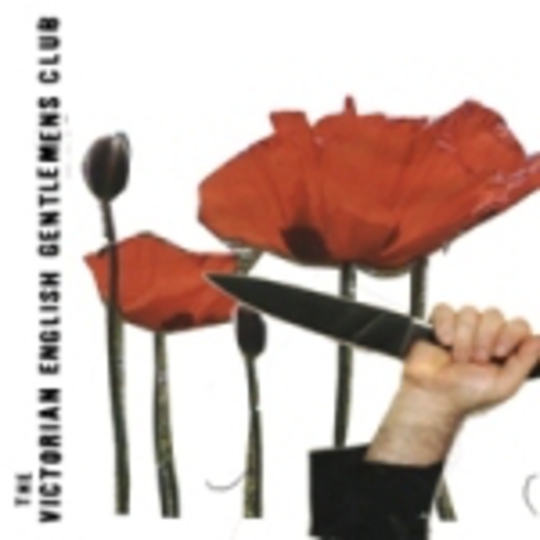 Bizarre and cryptic yet believably bitter lyrics; an undertone of tacit threat; a wiry, high-speed angularity of the kind which leads to a tangible increase in the pulse rate; strange vocal whoops and barks forming an integral part of the melodic whole; an ability, despite the distinct awkwardness, to stick very thoroughly in the head; and, on top of all this, handclaps.

In fact, I really, really like it. The artistic debts (most notably to the Pixies) are obvious, and the standard of genius isn’t quite consistent. But frankly, my dears, who gives a damn when the overall impact is so overwhelmingly fantastic?

The Victorian English Gentlemen’s Club possesses a racketty, tick-tock irregularity, a tight angularity married to a paradoxical sense that, at any minute, the whole thing could fly apart under the weight of its own velocity. This framework supports an emotional range that catapults between calculating, malevolent menace and deranged bouts of gutter-level regret, and which does so with an intensity which makes the sparse instrumental arrangements seem far fuller than they technically are. And, as if that weren’t enough to weld the listener’s ear to the stereo, bursts of ear-grabbing vocal and instrumental oddities – screams, yelps, sliding notes – keep leaping out from the whole, compelling any wandering attention to come back and pay close heed.

And close heed is a fee I’m quite happy to pay to this simply cracking album: mixing energy, aesthetics and a sparse sense of complete concentration, it hits the spot completely. A blazingly confident and very fucking impressive debut, and one which has already got tenure on my stereo.