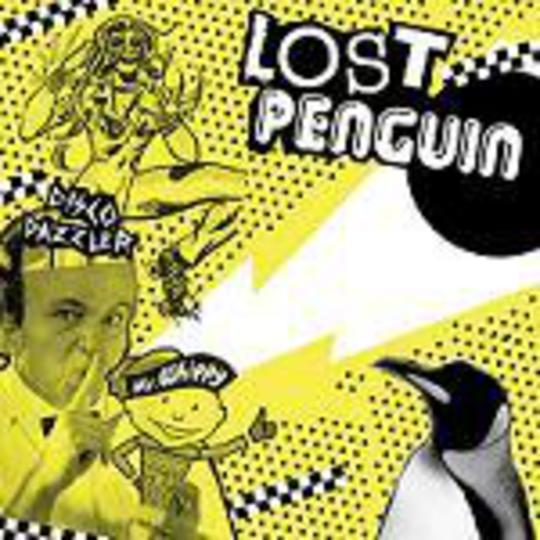 A bold minute-fifty short, 'Mr Whippy' achieves a sense of completion within that time frame by packing in so many über-fast beats and weirdnesses that the ears are still processing the intro when the outro fades away.

Starting with a clipped, icy beat and then introducing a cloak of ominous feedback-looped distortion, the start of the Song Proper is then heralded by a voice shouting “One two one two three four” in a manner more appropriate to initiating some particularly nasty gladiatorial sparring…

…and enter the Manda Rin-crossed-with-a-taser vocal hollering on the subject of an ice-cream man father who “makes it all up under my bed” (if ever get the chance to ask, I’m really not going to). Lost Penguin then find time to repeat this structure and to whack an ice-cream van sample* onto the end of it all. Crikey.

AA-Side ‘Disco Dazzler’ maintains the repetition but matches it to a more trancey and rather less… well, rather less insane background. It doesn’t quite match 'Mr Whippy'’s electro-mayhem of techno beats, warped-but-present song structure and utterly bewildering lyrics, but nonetheless, the energy and inventiveness is still there. Lost Penguin’s reality-estranged sense of fun and oddity makes for a very pleasing brand of hyperactive daftness, so get ye dancing.

Andy/Anything But Disco (You Ruined My Life)