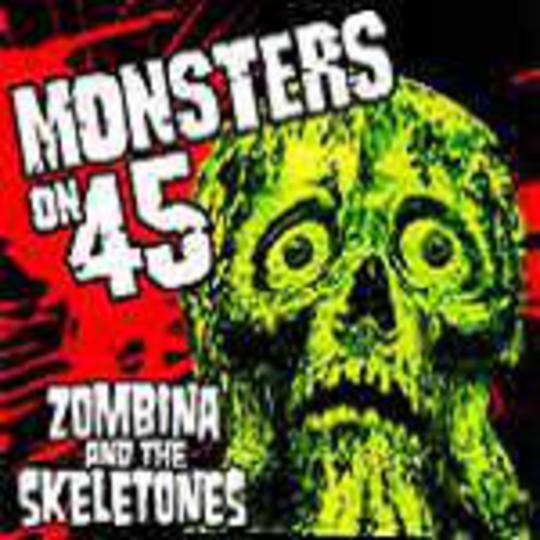 Lock the doors, seal the windows round with duct tape* and string garlic from the roofbeams: Zombina and the Skeletones are back, with an undead army of punk-pop-disco zombie tunes which will withstand even the sharpest of stakes. Well, have you ever succeeded in staking a soundwave? You haven’t, have you? Of course not. So, resistance is futile: the only course of action that remains is to lace your dancing shoes firmly, gird your loins and “swing it right/At the zombie hop tonight”.

Fortunately, following this advice is not the slightest bit baneful. The ten songs on this collection of 7” singles range from full-on punk attacks through squelching LA sax grooves to sixties pop harmonies, but they have one thing in common: a toe-tapping, jiving beat that makes the most taciturn of feet twitch, tap and long to hit the dance floor.

As you might’ve guessed, Zombina And The Skeletones are possessed of a robust and bloodthirsty B-movie sense of humour, and also have a finely-tuned ear for the bizarre. Mass murderers, cursed supernatural beings, alien invaders and long-lost lovers in an interstellar state of suspended animation parade through these songs to a backdrop of whirling keyboards, swampy noises, whooping harmonies, handclaps and lo-fidelity, high-flying energy. It’s kick-ass, tuneful, surreal and simple fun of the kind which bypasses beard-stroking and goes straight for the grin-inducing escapism button – and does so with Technicolour style.

If you’ve an unpretentious sense of fun, a love of B-movies, a yen to dance or an appreciation for silly pop music – or, indeed, all four - I recommend you investigate this compilation. Go on - get yerself some espirit de corpse.

*Handily, this is also effective against terrorist attack. Bonus!

Beneath The Ivy EP