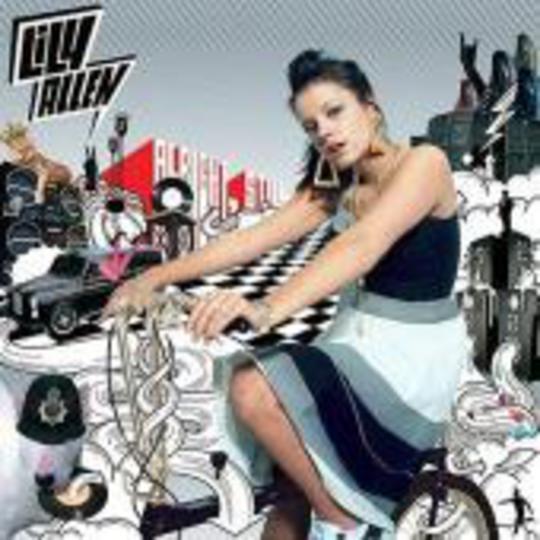 It'd be really easy to put the boot into Lily Allen, wouldn't it? Keith's daughter, self-styled queen of MySpace, supergob supreme, two major label record deals before the age of 21... do I need to go on? Well, yes, because although her constant, shamelessly self-promotional rants about other bands have grown tiring already, her summery debut album is still sizzling away on my stereo after a good few weeks' play.

True, it might not be there in six months, but Allen's music doesn't pretend to be challenging: it's sugar-sweet bubblegum pop that does exactly what it says it on the tin. It's disposable, it's now, and while The Eraser or Black Holes And Revelations might just change your life, this undoubtedly won't. It'll certainly make you laugh, though, and maybe even 'Smile'...

Alright, Still kicks off with the aforementioned number one single, an infectious slice of bouncing, carnival reggae that punches hard with its opening line: "When you first left me / I was wanting more / But you were fucking that girl next door / What you do that for?" A melancholy theme set against breezy beats, and not an obvious TOTP contender on the surface, 'Smile' is good but far from one of the LP's choice cuts.

Instead, it's left to 'Knock 'Em Out', where Allen tells a sleazy admirer she's pregnant and has herpes, and 'Not Big', a tale of premature ejaculation, infidelity and size issues, to raise the lyrical temperature. Paroxically, the first seven tracks of the record could happily soundtrack a children's TV show with their playful melodies, or provide the script for a post-watershed episode of Eastenders.

Things tail off noticeably towards the end with the forgettable 'Take What You Take' and 'Friend Of Mine', both lacking in wit and imagination compared with what's gone before. 'Alfie' rescues things a bit, but Allen's MySpace followers will be disappointed with the omission of live favourite 'Nan, You're A Window Shopper' (sample lyric: "You're mad as fuck, and you're just alive") due to licensing issues with some of the samples, and 'Cheryl Tweedy', a track based on Origin Unknown's DnB anthem 'Valley Of The Shadows'.

Alright, Still, then, is almost a brilliant record, easily a good one and one that promises to divide opinion like Marmite. As much of a cliché as it is, you're either going to love Allen or hate her. Chances are, if you've been downloading the songs, keeping up with her blogs and laughing at the soundbites, you're in the former camp; if not, you've probably already dismissed her as a fake with a famous dad.

If, though, by some twist of fate, you've managed to avoid all the headlines, give this a chance and you might just be pleasantly surprised.