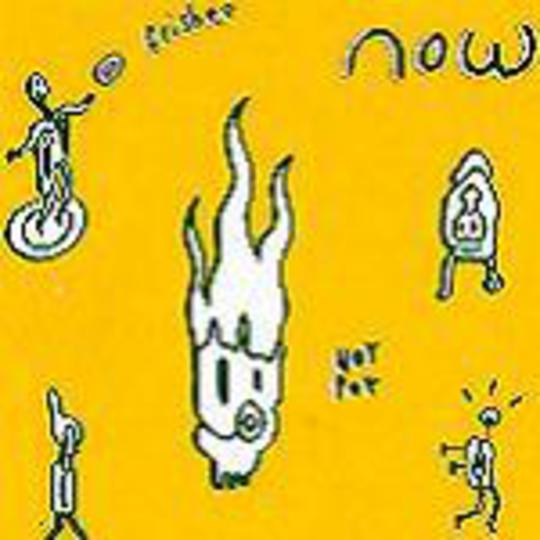 There’s not many bands left, let’s face it, that claim to make pop music and yet start their debut album with an eleven-minute soundscape that drifts blissfully from being a dainty electronic choral rhyme to a drum machine-led minimal techno effort to an all-out samba throw-down and back again, let alone anyone who can make it work. Which is why my soul, my ears and my dancing shoes thank Now, more a collective than a band, who haven’t so much as made an album as created an antidote for musical apathy. This is a band that have played with Damo Suzuki and pulled it off. Yep, that good. And Frisbee Hot Pot is one of those albums that, if art-pop is a term coming back into fashion, would be somewhere between Pollock and Kandinsky – free-flowing yet structured, vivid yet soothing, bold yet with numerous untold hidden depths.

Musically it’s all over the shop, of course, yet manages to steer clear of sounding like a mere mesh of disparate influences badly thrust together – seemingly because they not only have a great understanding of the rhythmical heart in everything (all music is dance music, etc), but can apply it to their own restless, driving sound. ‘Little Bits Inside Of You’ comes on like a glorious summit between Talking Heads and The Knife, all squelchy synths, funk-heavy bass burbles, tribal harmonic chants and the occasional stern-headmistress vocal. The most notable ‘hit’ here, ‘The In-Case’, manages to be a plaintive lament, albeit one with a frantic live breakbeat underneath, and makes great use of startling the listener with some massive clamorous clanging noises. Such is the nature of the rest of the album, really, feeding off the element of surprise even after repeated listens, steering your senses into different uncharted territories through each curious noise. ‘Container Theory’, for instance, begins with a startling burst of Mariachi-style trumpet, which continues into the trip-hoppy sprawl of ‘Moment’ – it bubbles out of the speakers like liquid sound in stained-glass bottles, all fizzy and kaleidoscopic.

Thing is, for a while it doesn’t let up either, leading you to wonder where exactly they’re mining all these ideas from. ‘Ne? Un!’ is lo-fi with party organ and handclaps that wants to be dancefloor-friendly but settles for being a whole lot of fun, and ‘Pachinko’ balances on the edge of being experimental hip-hop, yet without any garish production sheen. But, perhaps to make up for all the energy that surges through the first half of the album, the lattermost tracks take a turn for the ambient, and a rather gorgeous type of ambient at that: ‘I Heard Footsteps Outside, Soft Footsteps… Like Naked Feet’ and ‘Calanized’ pinpoint the exact moment that the likes of !!! or Four Tet start coming down. And as the whole album winds itself slowly to a halt, you know it is a journey colourful, perplexing and astounding enough to warrant many return trips. Inspired and inspiring.