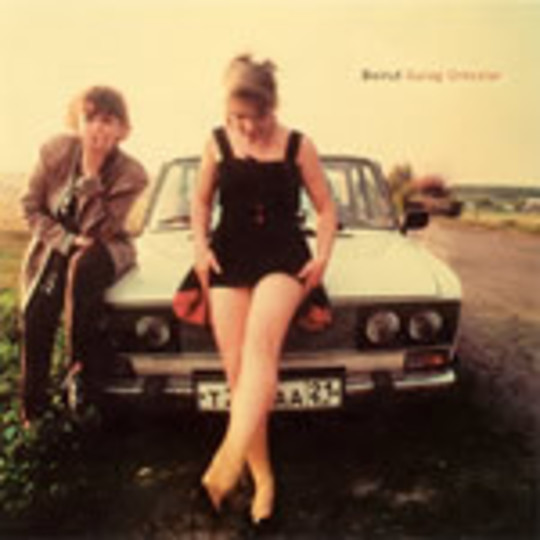 I could have sworn I was in the audience, silent and reverent with everyone else. But now it's hard to tell which of us are the crowd and which are the band - we're all in hand-me-down wardrobes and playing instruments just dug out of the ground, and we're marching, dancing and singing from the very bases of our throats. We are the Gulag Orkestar. We are this tattered and glorious mess of bodies lit by spare flames and moonlight and surrounded by friends and soon-to-be-friends. Such is the feeling that this album exudes with every thump, crash, rattle and clap. It's an album you're invited to, and told to bring warm coats and a hip flask. A party both boisterous and intimate, in a tunnel, a field or a forest.

There's been no end of exhaustive praise heaped upon **Zach Condon** for an album 90 per cent composed of his multi-instrumental talents, and far be it from me to stop. While the excitable Neutral Milk Hotel comparisons are understandable - piercing brass swells and flailing marching bands (courtesy of NMH/A Hawk And A Hacksaw man Jeremy Barnes) - _Gulag Orkestar_ is more than Elephant 6 revivalism. Firstly, there's that voice - this beautifully lithe, lazily acrobatic croon that sounds like Jeff Buckley brandishing a Rufus Wainwright ventriloquist dummy. He sings from the bottom of a well, the middle of a forest. On the accordion-led sway _'Mount Wroclai (Idle Days)'_, it's proud, graceful and haunting. On _'Scenic World'_ he's Stephen Merritt, all deep melodrama and grandiosity.

Secondly, these songs are both utterly beautiful and truly dirt-stained. _Gulag Orkestar _is far from a contrived indie interpretation of Eastern European folk. Condon's choice to drop out of college to travel the Balkan States shows immediately and powerfully, and the rhythms and melodies soaked up during those months seep out effortlessly.

The lilting _'Postcards from Italy'_ has no equal with its melancholic but regal trumpet laid out over shuffling percussion and ukulele strums. Nothing quite touches the primal wails and drum-thumps that dominate the opening title track. _'Prenzlauerburg'_ is somewhere between a rambling waltz and a forgotten hymn, accompanied by trumpets and marching bands. With these songs all occupying the grand opening act, it's an understandable criticism to say that the second half of _Gulag Orkestar_ doesn't quite match it, though it is redeemed slightly by the curious inclusion of drum machines and toy synths on _'Scenic World'_ and the revelatory closer _'After The Curtain'_, where applause smatters like heavy rain. Rather than sticking out like electronic Trojan horses, the spare bleeps and keyboard lines throw light into the darker recesses of this curious, addictive album. Precocious, other-worldly and vividly ambitious.