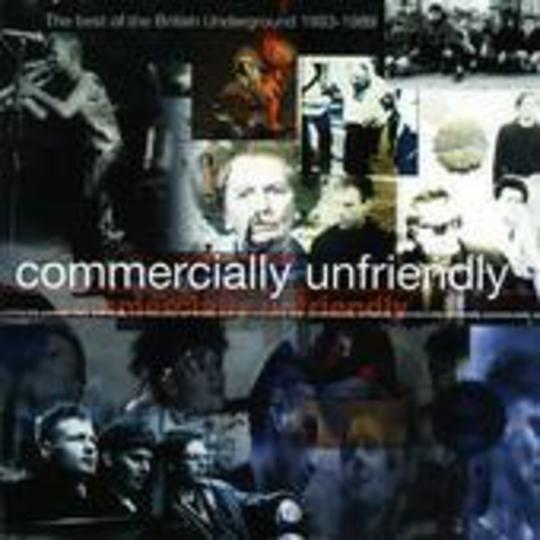 Sometimes a title doesn't lie, and in this case, calling this album "Commercially Unfriendly" couldn't be more spot on if it tried.

All of the songs on this record were recorded in the midst of the decade time will hopefully forget, the eighties. Not only is this classed as the best of the underground scene from that era, most of it actually sounds like it was recorded underground, possibly in a coal bunker somewhere round the back alleys of Oldham.

Of the 13 tracks on here, the majority really do sound like primitive explorations into the avant-garde and in some cases the end results are quite unlistenable.

On the other hand though, the good stuff on this record is quite exceptional, and almost makes this a must own compilation, although in theory maybe more satisfaction would be gained in tracking down some of the original artefacts from which Commercially Unfriendly was compiled.

'Wings', a rarity from The Fall, opens Commercially Unfriendly. It originally came from the b-side of long lost classic 'Kicker Conspiracy' and sees the boy E. Smith in top form, antagonising and spitting caustic phlegm through a tidal wave of incendiary noise and confusion. The Membranes' 'Spike Milligan's Tape Recorder', featuring John Robb on guitar and vocals, is a three minute gutterpunk thrash that still sounds fresh and disconsolate today, while Dog Faced Hermans' 'Incineration' could be cited as one of the true founders of the Riot Grrrl scene. Pigbros - whose drummer was a certain Fuzz Townshend, later to find fame with Pop Will Eat Itself - contribute 'Warfood', which sounds like the remnants of a 60s cop theme tune being forced through a corn grinder. "There must be something radically wrong..." spits the lyric. There was. Ask your folks.

Standing out head and shoulders above the rest, though, is 'Urban Ospreys' by The Nightingales, whose in-your-face skat-punk is at the totally opposite end of the spectrum to The Smiths. It still sounds more future-friendly than The Futureheads and lays its roots in Maximo's Park.

If you want to know what "independent" really meant before it got diluted and shortened to "indie", 'Commercially Unfriendly' is for you.