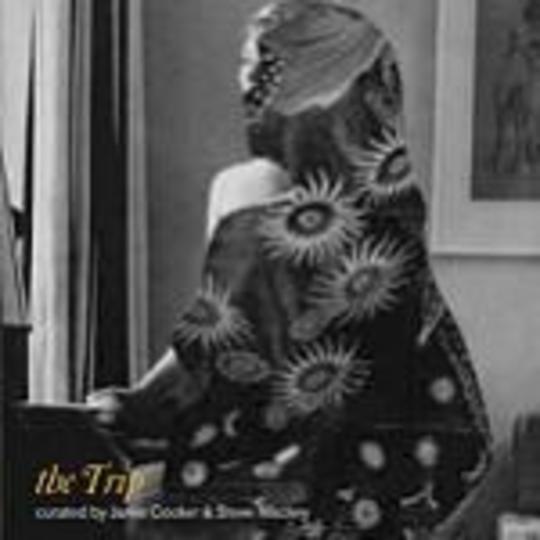 Dear music industry, how did we get to the point where the soundtrack to a band or DJ’s state of shagged-out post-club reverie becomes a reputable new product? Late Night Tales, Another Fine Mess, Bugged In, All Back To Mine… they all seem to be the aural spawn of the chill-out compilation boom at the last fin-de-siècle and society’s rather unsavoury obsession with the celebrity lifestyle. What seems to redeem the whole format, though, is that a lot of them are pretty good. Exhibit A: The Trip: curated by Jarvis Cocker & Steve Mackay.

Yes, it’s likely that this compilation is going to be good because of the reputation these guys – y’know, the one from Harry Potter and his mate - have as hip and happening bo’ selectors. But in terms of the compilation as journey, like the title suggests, they’re obviously taking a very sporadic scenic route, lingering with a lot of icons they may have possibly found in the 25p bin of the local Help The Aged* (hello Everly Brothers, howdy Neil Sedaka, what are you doing here David Essex?). Plus, anybody who likes to chill out to the likes of ‘Release The Bats’ by The Birthday Party or ‘Jet Boy Jet Girl’ by Elton Motello might want to be avoided during happy hour. Yet, for all the confusion and surprise some of their choices may evoke, there is a general theme of blissful, melancholic beauty, and not a little dash of eccentricity.

This compilation, it seems, is best at revelations. Carl Orff’s opener ‘Gassenhauer’ is a gorgeous flicker of xylophone counterpoint, and despite the ambience being destroyed by the aforementioned wailing and tribal doom-punk of The Birthday Party, it sets the mood well. Dory Previn croons a perky and inviting little narrative that asks “Would you care to stay a while and save my life? I don’t know why I just said that…” which is possibly the most endearing moment in a collection of endearing moments. And for all the punk icons that turned to calmer things - Jonathan Richman, John Cooper Clarke and, crikey, Screaming Lord Sutch - there’s a recognisable rock and roll figure doing something unexpected, like Sonny Bono spinning a dark psychedelic yarn in ‘Pammies On A Bummer’ or Gene Pitney misplacing the schmaltz and doing something genuinely heart-wrenching on ’24 Sycamore’.

That’s not to say that this is an exercise in out-obscuring everybody else’s record collections, as there are a few names here conspicuous, but entirely welcome, by their familiarity. The Beach Boys are included with ‘Feel Flows’, a track so sonically luscious and light-years ahead of most pop music even today that, if you’ll excuse the fit of institutional blasphemy, pisses all over anything off Pet Sounds. Lee Hazelwood does the ominous cautionary tale that he does so well (even though it still marks him out as a poor man’s Johnny Cash) and fellow Sheffieldians The Human League accidentally let slip where half of Relaxed Muscle’s ideas came from. But more often the big hits are here under different guises, due to the sheer number of quirky cover versions present: OMD aim at conquering ‘Waiting For The Man’ and generally miss, although the sound of the future sounding so rapidly dated does give it something resembling charm; The Polecats turn ‘John, I’m Only Dancing’ into a rockabilly stomp, if a slightly half-hearted one; and ‘Purple Haze’ is turned into a feather-light slice of lounge marvellousness by Dion. But undoubtedly the jewel in the crown is The Fall taking on ‘Lost In Music’, the classic disco-mangling theme tune to a late-Eighties high-octane LA cop drama that never was. Everybody now, “Caught in a trap-ah…”

Ultimately this is not the most complicated of formats – two vinyl trainspotters, two hours, 35 songs, and a great deal of magical musical moments – but for the variety and quirky grandeur alone you can at least let it feed your ears when your eyes are too blurry. It’s a confusing journey, yes, but still one well worth hopping along for the ride with.

Under A Billion Suns

Various, The Fall, The Membranes, The Ex, The Nightingales