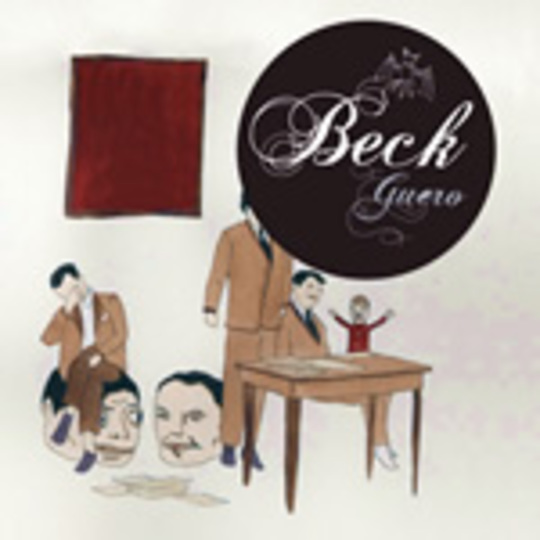 While the vast majority of sappy lovesick suckers amongst us are quite content to get over a break up like the rest of the world by getting drunk enough to see through time, Beck chose to bring us 'Sea Change'. The very definition of melancholy, Beck's newly discovered bluesman's rasp and an army of achingly sad string arrangements came together to form his most sincere and honest record. Two years on however and it's probably safe to say the rebound is over. The opening riff of 'E-Pro' snarls with all the subtley of a neon pink military warship lined with burlesque dancers sounding air horns - it makes dirty, filthy love to every scintilla of your brain and feels very, very right.

For those keeping score at home, 'Guero' is the eighth album proper from the world's favourite multi-headed musical hydra and in keeping with tradition, sounds very little like the album which precedes it. Though instead of forging a brand new genre, 'Guero' (which means 'white boy' in Spanish, reportedly) manages to encompass all of the chewy fondant centers from previous albums with very little of the boring dark chocolate shells. Here you'll find danceable guitar pop, spanish rhythms, kitschy sampling, spare electronica, whiskey stained acoustic and plenty of oddball cut and paste lyrics. "See the vegetable man in the vegetable van/With a horn that's honking like a mariachi band" begins 'Que' Onda Guero' with scratched horns and stop-start rhythms. This is more animated Beck akin to the years of 'Odelay' - unsurprising, considering the return of The Dust Brothers, who produce alongside Beck.

These comparisons to 'Odelay' are more than simply the delusions of fans refusing to vacate 1996. The main differences lie in that 'Guero' can dart between the angular electro-funk of 'Hell Yes' to the elastic guitar lines and ethereal atmosphere found in 'Girl' with a heightened air of maturity, but retaining a sense of fun. Take the sultry handclap-laden strut of 'Go It Alone' - carried by a swaggering bass line provided by Jack White, its minimalism becomes its virtue making it one of the finest tracks on display. The superb 'Earthquake Weather' (finally perfected having been doing the rounds since the days of 'Midnite Vultures') reclines in the sun with the same understated attraction whilst 'Black Tambourine' pilfers a dangerously Madchester rhythm but still retains face whilst simultaneously managing to shake it. Add to these the viciously infectious one-two guitar pop punch of 'Farewell Ride' and 'Rental Car' and you essentially have yourself a comprehensive Beck For Beginners. But while the highs are undoubtedly high, the mis-steps seem to resonate louder given the time the sound has had to be perfected. 'Emergency Exit' could easily be a tired retread of 'Novacane' only without the killer sampling, and both 'Missing and 'Scarecrow' suffer from repetitive and over-long mixes. The former begins with a promising latin shuffle before getting stuck on an infinite loop with overly wistful and uninspired lyrics ("Something always missing/Always someone missing something") whilst the latter feels unnecessarily long when compared to its more succinct neighbours.

These are minor points however. The bigger issue is that 'Guero' contains several familiar sounds merely repackaged and freshened up - remnants of the party album mentality of 'Midnite Vultures' sit next to the eclecticism of 'Odelay' and the folk sensibilities of 'Mutations'. What negates this is the conviction with which it's all delivered - this is the sound of an artist having fun with a well practised sound. For newcomers and fans just pleased to see a Gen X survivor still making credible records, 'Guero' is a joy.

Wind In The Wires