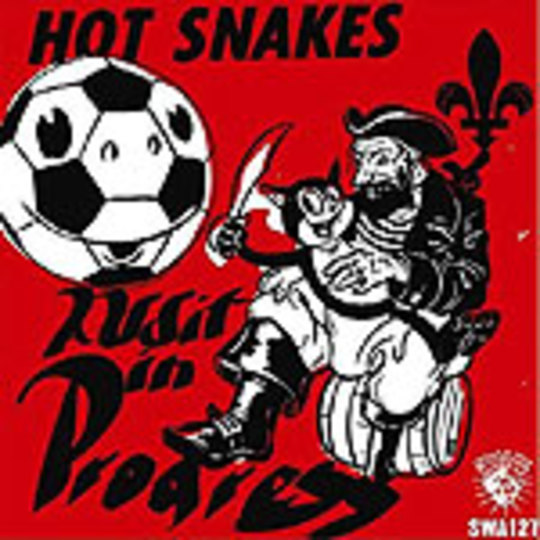 About ten or so years ago the pair of them garnered immortality among guitar toting purveyors of extreme music, in the guise of Drive Like Jehu. While Jehu's math-punk take on music won them stacks of critical kudos, the extreme nature of the band's sound failed to shift units on the scale a major like Interscope expected of a band they'd signed in the wake of the grunge explosion. Froberg and Reis parted ways during the late 90s, only to reunite in 2000 forming the core of Hot Snakes, by which time Reis had shot to underground stardom fronting Rocket From The Crypt.

Stylistically, Hot Snakes expand on the lethal, mind-lacerating intensity and quick-switch time changes of Drive Like Jehu and combine the overall sound with the strut and swagger of RFTC. 'Audit In Progress' is the third Snakes instalment and, aside from the replacing of Jason Kourkounis on drums with RFTC stickman Mario Rubalcaba, the Hot Snakes manifesto remains “If it ain’t broke, don’t fix it”. Not bad for a band playing some of the most blistering punk rock around.

You’ll know within seconds of hitting play whether you’re going to get on with this band or not – Reis’s guitar lets rip with a machine gun volley, unleashing the 'Ace of Spades'-style intro of 'Brainstrust', a quick-striding monster that reers and kicks like a bronco with a bur under its saddle. There’s brief respite in the chorus as Froberg belts out parcel-sized sentiments over giant-sized strums, and then they hit the accelerator again and you’re back to being dragged behind a stock car on the Indy 500.

In the Snakes' world, songs have but one setting - fast and brutal - yet somehow the band manage a massive amount of creativity within this seemingly thin dynamic. 'Retrofit' showcases a bludgeoning intro that moves smoothly to stumbling verses, then to searingly white-hot bridges, and finally to a jagged chorus with guitars that bite and sting like a bike chain to the face. Elsewhere, the jumpy 'Kreative Kontrol' sounds like the result of Mclusky being asked to score an episode of Wacky Races, and 'Plenty For All' rides in surfer-style on a lead sweet enough to sound like it was nicked from Pretty Girls Make Graves in their heavier moments.

It's hard to know what to make of Froberg's lyrics. Is he taking aim at self-obsession on 'Think About Carbs'? Is he bitching about the music industry in 'Kreative Kontrol'? What the hell is he on about in 'Hi-Lites ("Decor!/Decor!/Pink!")? It's tempting to look to the title track for an answer ("Audit Me/Audit Me/I don't give a shit!"), but overall Froberg's vocals seem to serve the purpose they did with Jehu - the mayhem is the message.

If this album proves anything, it's that Hot Snakes have somehow managed the trick of staying on punk rock's straight and narrow while being wildly colourful within the lines. Like a 50s street gang staking its turf, 'Audit In Progress' is a reaffirmation that Reis, Froberg and company are simply the best at what they do, which is playing good time rock and roll for mosh pit lovers.