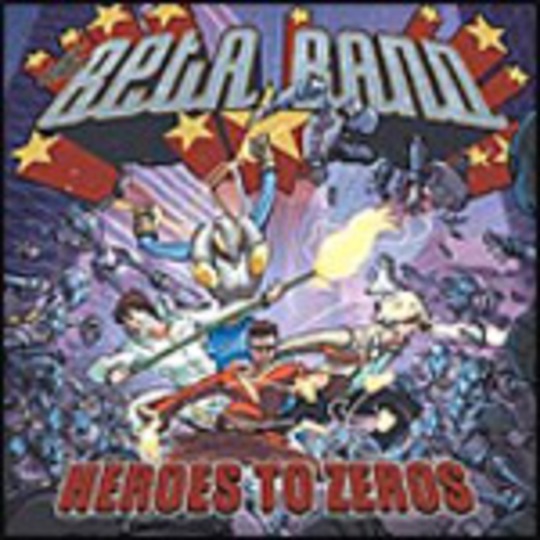 Despite conformity and strait-jacketing not being musical virtues that we either applaud or encourage, it does occasionally help to have a little direction and structure. Unsurprising for a band as freely-spirited as The Beta Band, these qualities are sometimes lacking.

Evidently a lot of time and effort has gone into the making of the Scottish avant-indieists' new album, but the lengthy gestation period and a sense of over-incubation has led to something of a malformed mutant. Where it should have been hatched well before now, it's come out late, having grown odd, cumbersome extra limbs.

Opener 'Assessment' however, is a doozy; the insistent buzzing guitars and deep rolling bass give way to a three part horn-led wig-out and sounds like the best song that Ian Brown never had. Unfortunately, the rest of the first half of 'Heroes To Zeroes' is largely forgettable. '_Lion Thief_' starts with simple, spacious guitars and threatens a metamorphosis into something else, but it simply meanders to a stop, while 'Easy' fritters away without ever making a mark. Where these songs should be involving and complex like the Beta's best songs, we instead get aimless instrumentations and pointless noise effects.

Fortunately though, there is 'Wonderful', which is the sort of stoned psychedelic ballad that they excel at, and it is indeed rather wonderful. Sounding not unlike Spiritualized, it gratifyingly swells in all the right places. However, there's not enough of this, just the hint of it. 'Space' is a combination of squelching bass and dreamy vocals, but like, 'Lion Thief', comes to nothing. 'Troubles' attempts to repeat the trick of 'Wonderful', but seems like an overproduced snip of an idea.

There are other excellent moments, but not enough of them. 'Liquid Bird' is a fast-paced filterdisco effort, hectic and cool, whilst closer '_Pure For_' is understated and gossamer.

Ultimately though, the third LP proper by the band is frustrating; utterly annoying in fact. For we know that the Beta Band have one jaw-dropping album in them. 'Hot Shots' was nearly it, but certainly this is not. On balance it's acceptable,But for the Betas, that's simply not acceptable.