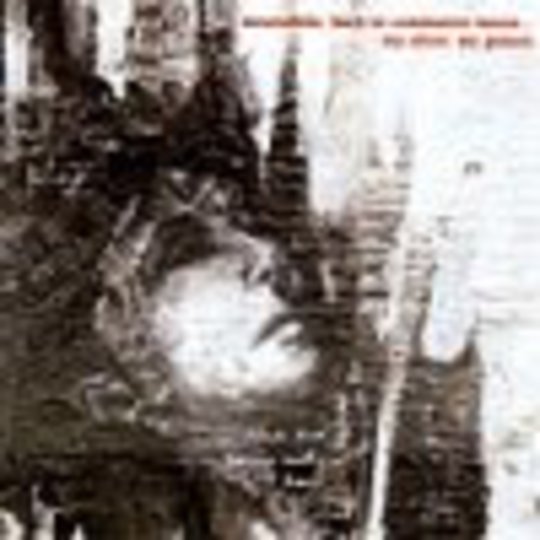 Meanwhile, Back In Communist Russia.. are like the morning after an abortion, or the minutes before a one night stand - your make-up smudged, tights laddered. Gruesomely sexy, like the taste of salt on your lips, liquid dripping from your fingertips and the look of sweet satisfaction on your demon’s face as they pull your head up by your hair. I think I like this band more than I should.

'My Elixir:My Poison', ‘The Russians’ second album, offers us more of the same from debut ‘Indian Ink’ but less of the same than anyone else can muster. Emily (cigarette-smoking vixen) pours her monologues over the top of James, Tim and Ollie’s intense frantic score of guitars, drums and keyboards, which come together like an orchestra of hundreds, high on dirty crack.

Arresting is the best way to describe this record. Listening to it I become incapable of moving much further than my own brain; imagination taking over as soon as the distant wayward beat of ‘th5’ pierces through the membrane of my skin and deep down into my ears. The record commandeers the stereo, holding you prisoner until the last beat fades and the rebel group tell you are free to go. The blind fold comes off and the sun acting as a torch, comes out of hiding and highlights all the corners of your world that 'My Elixir:My Poison' has just cleaned out of vermin and impostors.

‘Your eyelashes echoing the crest of the moon’

Emily’s volatile monologues (poetry readings/ diary entries/ suicide notes scrawled on skin with knives) leave you wondering if she is stable or broken. They are beautifully incoherent, not really forming a linear story, instead musing on some thought wave or sadness, her half-whispered half spoken voice sooths you, but is still intense without histrionics.

I’m finding it hard to describe each track as a single entity as you barely notice that one song has ended and another has begun. More like the whole album is one story. Tempos move like waves, like someone’s anger or adrenaline.

It feels like the whole thing was recorded in a damp basement, demons shouting from the corners, like in a dream. But one of those dreams you wake up from feeling better, like you’ve discovered something or your mind has been woken up by something fragile and poignant.

This is one of the most original records around at the moment. Meanwhile, Back In Communist Russia.. have made a beautifully captivating album that shows that not every post rock band sounds the same.