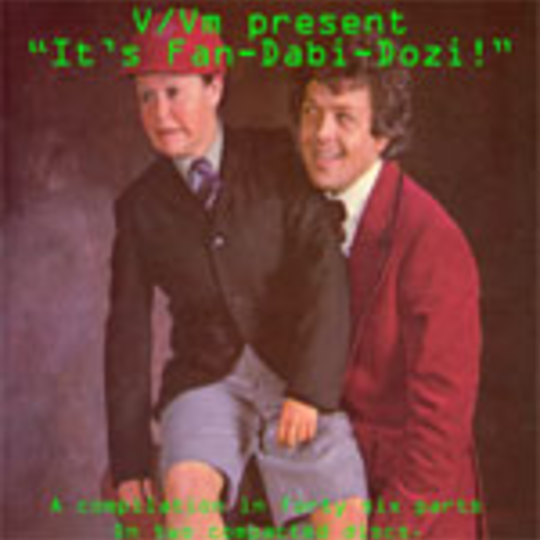 Cast your mind back to early last year. It seemed that Stockport’s V/Vm Test Records were knocking out unmistakable platters of genius week after week after week. Then, silence. What was wrong? Had the evil MCPS [Mechanical Copyright Protection Society, label fans. Best you don't ask - an editor] caught up with these copyright terrorists? Had they been lynched performing one of their infamous greatest hits sets?

V/Vm have been travelling the world, and have put together a double album of some of their greatest worldwide aural finds. 'It’s Fan-Dabi-Dozi' is the first release since V/Vm’s 'Good Things Can Happen' album, and how times have changed. The blatant mauling of pop’s best/worst contenders isn’t the main focus on this album. In its place we have some fine electronic music, courtesy of such luminaries as Kevin Blechdom, The Krankies, Toecutter, and Jansky Noise. This is a long album though, so most of it’s time is given to newer acts, such as Suicidal Rap Orgy, Vagina Jones, and Rank Sinatra, all knocking out stellar tracks.

And so, over forty-six tracks you can expect to hear ambience, Cornish folk music, reworkings of ‘classics’ by Will Smith and N-Sync, as well as walls of abrasive noise, evil child-fiddling pervert dialogue, and a truly staggering version of 'You Remind Me', by Insasajenai Douji.

Just when it seemed that V/Vm Test Records may be stuck into one style, along comes a double whammy of an album that firmly puts paid to that preconception.