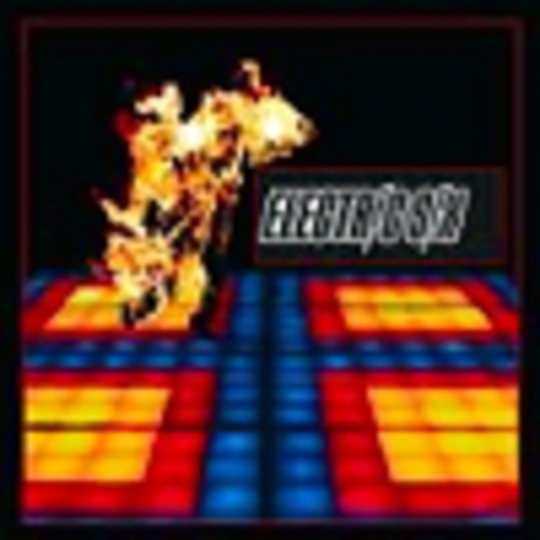 I wasn't expecting 'Fire' to be any good and rather sadly they've proved me right, which is a bit of a shame considering that in 'Gay Bar' and _'Danger! High Voltage'_, they've produced two of my favourite singles of the year. Bastards.

It's not just that proper pop star Dick Valentine - if that _is_ his real name - sounds like a right ol' perv' for most all of it, it's expecting to be let down then _actually being let down sucks_. A pessimist is supposed to never be disappointed. Well, hello Electric Six's debut LP.

"Girls are pretty, girls are nice, take your chances, roll the dice"

Whether or not they've been hyped to buggery doesn't really come into it. The thing is, Electric Six are too '80s sludge-rock and too old for 'Smash Hits', so that's them fucked on the teen-mag front, and if you want a tongue-in-cheek posing rock band with better tunes then there's The Darkness, or if the disco funk side of things takes your fancy then Har Mar Superstar is generally doing a better job of it, albeit in a much fatter and less-funny way. And he's got SARS or the plague or something, so best stay clear of him.

What's lacking through 'Fire' are the instant hooks of the singles. Exceptions which come close to hitting the mark include 'Improper Dancing', with a funky intro, and 'Getting Into the Jam', with a dirty bassline. The album isn't shit, it's just stupid. 'I'm the Bomb' initially sounds like a _'Danger! High Voltage'_ rewrite only a bit more serious (as serious as Valentine can get, anyway) and not anywhere near as good. You could dance but you wouldn't feel the need to sing along.

_"Hey girl, when I'm fucking you it's like nothing else matters"

Boo to the mess of bar chords which dominate and hello to the camp discopop of 'Synthesizer' despite a let-down of a chorus. This way, this way. It's good but it's no Bloodhound Gang, _'The Bad Touch'_.

If you've got the singles then you're not necessarily going to get off on this as well. If you already know you hate them then 'Fire' will give you more reason to do so. Shame.

Still, they're pretty cool, aren't they?

The Dandy Warhols at Brixton Academy, Lambeth, Fri 23 May