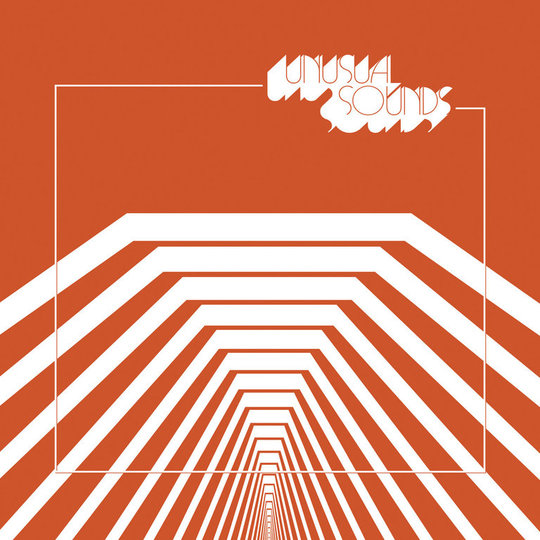 Before reading this review, go to your CD collection or music library and select a compilation album. Got one? Good. Look at the tracks. How many do you already have on either the original studio albums or other comps? Most I’d guess. Generally compilation albums are filled with songs you already have. Unusual Sounds: The Hidden History of Library Music is an exception. It contains 20 tracks that until recently were only available to serious collectors, diggers and music producers who wanted that killer bassline or breakbeat.

As detailed in Dave Hollander’s book Unusual Sounds (which this serves a companion to), the world of library music is a gateway to a parallel universe where music is only constrained by the composure’s imagination. To some library music is the last bastion of hidden gems and lost classics, like Northern Soul was the Seventies. It’s a world where a brief was given in the morning, the song was written, arranged, rehearsed and recorded by the end of the day. As hero of the scene Keith Mansfield said: ‘It was Decca Monday afternoon. Monday morning I get up, maybe 6:30, and I’ve got a piece of music to write for the B-Side. Hey, it’s the B-Side, I’m splitting it with the producer, what does it matter? I get up, I put a record on to get me in the groove and the first thing that came into my head is da-da-da-da’.

That piece of music in question was ‘Funky Fanfare’ and it opens Unusual Sounds. It features a massive bassline, tight drumming and a one of the catchiest horn riffs you’ll ever hear, and considering it was written in 1969 as a throwaway B-Side it sounds incredibly fresh and exciting. The keen eared of you will recognise it from the Dangerdoom track ‘Old School’. And this is the duality of library music. On one hand you take the songs as they are. Luscious experiments in recording and arranging created for a specific purpose or brief, or made just to fill a three minute space on a release. The other there’s is trying to work out where you’ve heard it before. Most of the tracks on Unusual Sounds have been sampled and looped over the years, so it’s a thrill to hear them how they were originally intended.

Jay Richford and Gary Stevan’s pulsating ‘Running Fast’ is up next. Syncopated drums and elongated keyboards are the main event, and as it progress so does the grin across your face. And this is the joy that the album brings. There is something about listening to these songs that brightens your day. Originally library music was meant to be a place where TV and film producers could select music that fitted their scenes cheaply. They were never meant to be listened to like this. If you ever noticed them in a film, then they hadn’t done their job. They were designed to dissolve into the back ground like a dodgy 1970s dissolve or fade.

A standout moment on Unusual Sounds is Joel Vandroogenbroeck and Marc Monsen’s ‘Group Meditation’. This is a 14-minute melodic monster. Opening with a gong being banged, it gently skews into electronic blips and beeps, before ethereal synths takes over and slowly undulates, warp and merge until you feel wrapped in a felt cloak. But not all library music was light and airy; ‘Survivor’ by Klaus Weiss is a dark and brooding number. The synths rumble, the drums cascade and the bassline throbs with menace. Easy listening this it not. Unusual Sounds: The Hidden History of Library Music plays incredibly well if you are already a fan of library. Every track is massive and a classic of the genre.

It is also a great starting place if you don’t know anything about library music as the album is chocked full of bangers. Wall-to-wall bangers! It gives you a launch pad to go and geek out over musicians and labels, each being a rabbit hole well worth going down. The abundance of heavy hitters is remarkable. You can’t move for them. Stefano Torossi, Klaus Weiss, Janko Nilovic, John Cameron, and the don Mansfield are all represented. Each of their submissions conveys their genius. Some of the tracks are subtle – ‘La Dimostrazione’ and ‘Group Meditation’ – and others are blaring, balls to the wall slabs of epicness – ‘Funky Fanfare’ and ‘Mild Maniac’. Let’s hope that this is the first in a series that uncovers more and of a hidden history that lurks just below pop’s shinny surface.